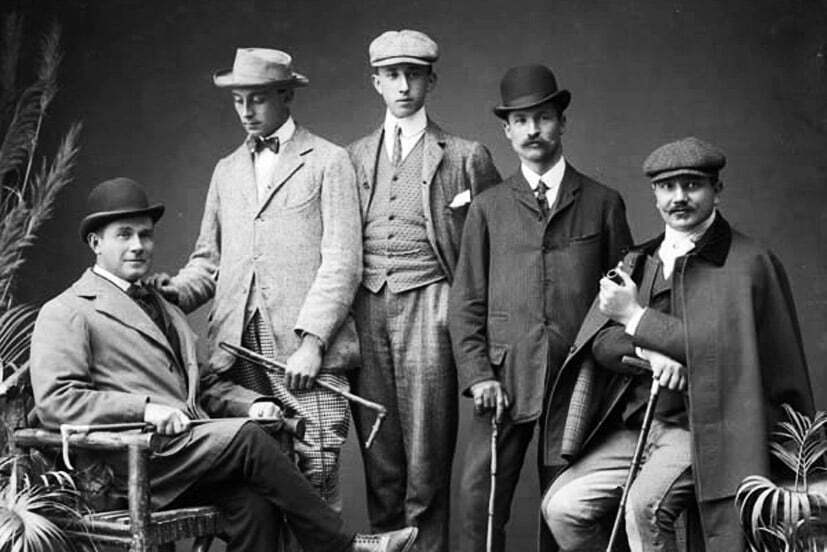 The early 1900s saw the peak of the British Empire and some relaxation in social behavior after the conservatism of the Victorian empire. There was a heightened interest in fashion and style particularly among the upper-class led by the royalty influenced by the art and style of continental Europe. These years are also known as the Edwardian era after the fashionable British king of the time. The industrial revolution had improved the living standards of the working class as well, and they could afford more fashionable outfits and in more quantities. The early 1900s also saw the emergence of mail-order catalogs which popularized fashionable outfits among the general population. The late 1910s saw the First World War and its disruption on life including fashion. What did men wear in this era? 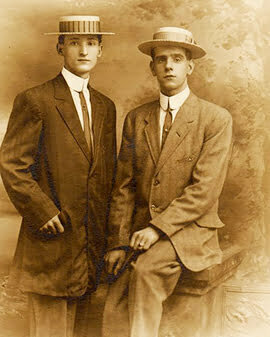 Men were expected to be formal and sober during the day whether at work or at home. The common man had several suits to take him through the week. The common suit in the 1900s was popularly known as the sack suit, which was a loose-fitting outfit. The suit jacket featured wide lapels and two or three buttons and extended down to the mid-thigh. The edges were straight or slightly rounded with a slight opening at the front. The overall upper body silhouette was a boxy one. This jacket was worn with trousers that were high-waisted and straight-legged sometimes hanging a few inches above the ankle.

Sack suits were made from heavy wool fabric, while cheaper versions were made from cotton and wool blends. The colors were dark blue, grey, brown and green for adventurous types. The fabric was striped, checked or plaid.

Single-breasted jackets with center vents were more common, while double-breasted suits were seen on younger men. Fashionable men also wore their suits in a slimmer fit to give narrower and long-legged silhouettes. Wider lapels were also used to feature different carnation decorations. The Jazz suit of the late 1910s men’s fashion was a slim fitting outfit that cinched the waist with three buttons. It was worn with slim-fitting trousers that ended above the ankle, popularly known as stovepipe trousers. 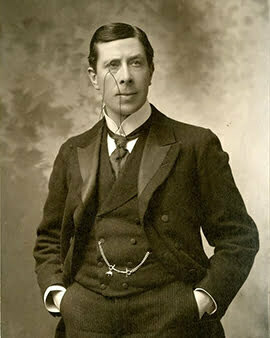 The First World War inspired young men returning from the war to prefer suits that fit just like their military uniforms. Jackets were preferred in shorter lengths without shoulder pads. They were also cut closer to fit more naturally. They also borrowed large patch pockets just like military uniforms. Fabrics became lighter and came with more color to forget the drabness of military uniforms. New colors such as the sky and electric blues, sage green, and lilac purples were increasingly seen on men's outfits.

Low mid-chest waistcoats also known as vest coats were carried over from the previous century. The 1900s vest coat was low and remained hidden under the jacket. High chested vest coats were seen after the war. 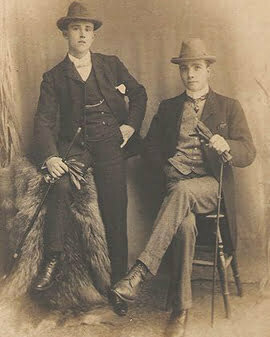 Upper-class men wore overcoats that reached to knee level or slightly below. They were made of heavy fabric; wool, chinchilla or Melton. Overcoats for lighter spring weather were made of lighter wool. Expensive overcoats came with seal or bear fur, while more affordable overcoats were lined with sheep or rabbit fur. The overcoat came with wide lapels and a wide hem.

Working-class men also wore reversible leather and corduroy jackets lined with sheepskin. These were shorter than overcoats and reached the mid-thigh or knee level. The heavy Indian blanket plaid jacket for cold winter weather became popular after the war.

Suits were worn with white or gray shirts with a bib front to keep the shirt as flat as possible under the vest coat. The fabric was linen while cheaper shirts were made of cotton. Shirts were also made without collars, allowing men to wear shirts more than once with different collars. High stiff collars were popular in the 1900s while rounded club collars became fashionable after the war. Collars were invariably white. 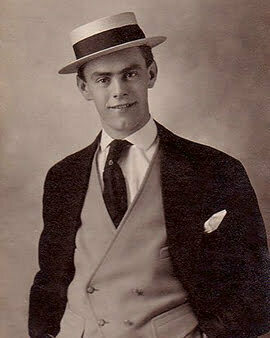 The boot was the preferred shoe for everyday wear for travelers, laborers, and businessmen. These boots had eyelets and hook for laces in front. Chelsea boots with elastic sides were popular in the countryside. The 1910s saw the popularity of low-heeled Oxfords and brogues.

Pocket watches remained popular in the 1900s while wristwatches emerged in the 1910s. Other accessories were ties, gloves, cuff links. A hat remained a must-have accessory for a man. Felt bowler or derby hats were preferred by the working-class men while the homburg was for the well-off businessman.