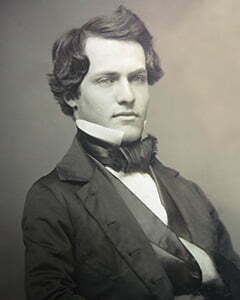 It may seem unbelievable that men wore corsets at one time in history, but cinched waists were in fashion in the early years of the Victorian era, which ran from 1830 to 1900. This era saw a lot of changes as industrialization and urbanization brought more people into towns and cities. Social and economic status played a major role in many aspects including fashion. While modern fabric making was taking shape and making cloth more accessible, mass production had not taken root. People depended on personal tailors. Upper- and middle-class men could afford few outfits while working-class men could only afford two to three outfits. But all gentlemen were expected to be formal and elegant all the time; at the workplace or home. What did men wear during this period? 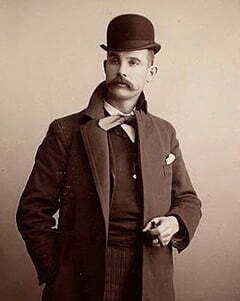 A coat was the highlight of men's Victorian clothing and remained fashionable for the entire period. The early frock coat was popular up to the 1850s. It was cut with a long waist and a short skirt. It came with ‘M’ lapels. The frock coat was shaped with a narrow waist and wide sleeves at the shoulders. The sleeves became narrower and straighter, lapels became longer, and waists rose higher in the 1860s.

The morning coat gained popularity in the 1850s. it took the shape of a frock coat with the front of the skirt cut away in a curve for easier horse riding. A daytime jacket evolved from this coat, for informal occasions and wearing in the countryside during hunts. It also featured wide straight sleeves and could be single or double-breasted. The Norfolk jacket was a belted jacket with front and back pleats.

Tailcoats were a must for evening wear. The tailcoat largely remained untouched up to the 1880s. The fronts were cut away at waist level and were either single or double-breasted. It has long double 'M' notched lapels with high buttons. The sleeves were wide and narrow in the early coats but tapered at the wrists starting the 1860s. Dinner jackets appeared in the 1880s for less formal evening occasions. They were adaptations of the morning coat but featured roll collars that were attached to the coat unlike the separable collars of earlier jackets. 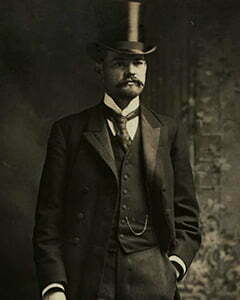 The waistcoat took much of the ornamentation of a man’s outfit. Although they were usually harmonized in color with the rest of the suit, they featured richer fabrics, typically silk, and fancier prints and embroidery. Fancier waistcoats for occasions like weddings sometimes came in contrasting colors with white and cream being the preferred colors. Cutting of the waistcoat also evolved over the years; In the 1840s the waist was long and pointed, a triangular gap appeared at the waist in the 1850s, the waist shortened and became less pointed in the 1860s, and finally became a straight line in the 1880s. 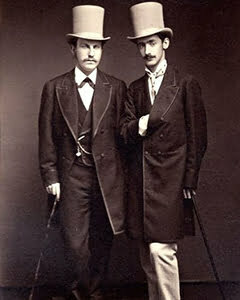 Pantaloons had replaced breeches in the early 1800s and were worn until the 1850s. They were tight-fitting and reached up to the ankle or calves. Narrow trousers with straps under the insteps appeared in the 1850s but the straps disappeared quickly. Peg-top trousers appeared in the 1860s, with a wide waist and tapering at the ankle. Front walls were common up to the 1850s when they were replaced by fly fronts. Trousers were typically black for evening wear while daytime colors included white and pale grey. Checks, stripes, and plaids were for less formal occasions. 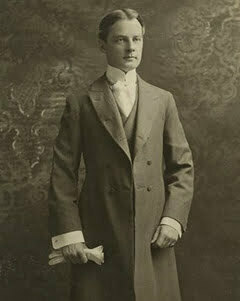 The frilled high collared Victorian men’s shirt was worn until the 1850s. Buttons and studs appeared on shirts starting the 1860s when shirts became plain at the front. They also came with vertical fronts that could be tucked in, and rounded bases. Shirts were typically made of white linen; colored shirts appeared in the 1890s. Detachable collars became lower starting the 1860s, and then taller again in the 1890s. 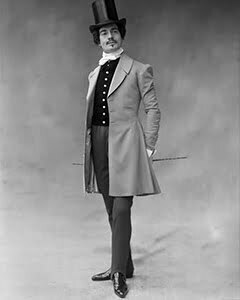 High boots with straight tops were called wellingtons while those with a curve were called Hessians. These were worn for riding while half-laced boots were worn for walking. Buttons and laces were at the side until the 1860s when laces were placed in front. Shoes typically came with a low heel. 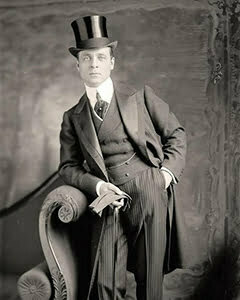 A top hat with a high flat top and narrow brim was a must-have for a gentleman. A straw boater was a hat with a lower top and a wider brim, suitable for wearing in sunny weather in the countryside.