The swimsuit has been in existence for a very long while. We’re looking at history that dates back to ancient Rome. Ladies in these times wore outfits which resembled the bikinis we have today. They wore bandeau-style tops and shorts in their bath houses, exposing a lot of skin. As time went on, ladies became modest. The 1700s brought about bathing gowns which were held down by weights to prevent the legs or almost any part of the skin from showing.

As with every decade came a new trend, the 1800s had a more definitive look for a swimsuit, or a seaside walking dress as it was called. They were less constricting than those of the 1700s, but still not functional enough for the purpose. From the mid 1800s, the bathing suit took on a modern look, still decent however, they became a bit more functional; consisting of a long flannel top and long shorts. Bathing shoes were also available to prevent cuts from objects while in the water. From the late 1800s to the early 1900s, sailor style swimsuits became the trend. They were a lot more convenient than those of the previous years.

From the 1910s, swimsuit got shorter. These form-fitting sailor inspired swimsuits were not entirely accepted by the society and there were regulations made to prevent ladies from wearing what was considered too short. Any lady found wearing short attires would be fined, and sometimes arrested. 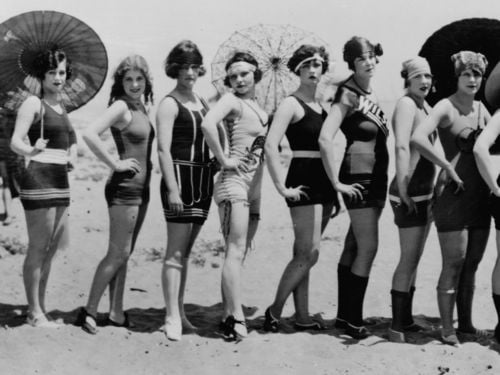 The 1920s was the year of rebellion. The flapper trend and the development of the feminist ideology brought about a shift from the norm of swimsuits. They became shorter, although there were still regulations on length. Like the flapper style, swimwear was free and childlike style dresses, which stopped a few inches before the knee, exposing the legs and arms.  The necks became much lower, and the arm holes more open. Swimsuits were also made in a variety of color to suit a person’s needs. Men swimsuits were usually one-piece. They came in a variety of color but mostly came in stripes.

By the 1930s, swimwear began to resemble some of the one-piece ladies currently wear. They began to resemble the one-piece men wore in the previous decade, showing off more legs and exposing enough skin at the back. They were form-fitting and made from a stretchy synthetic material, making them comfortable and convenient for the purpose. 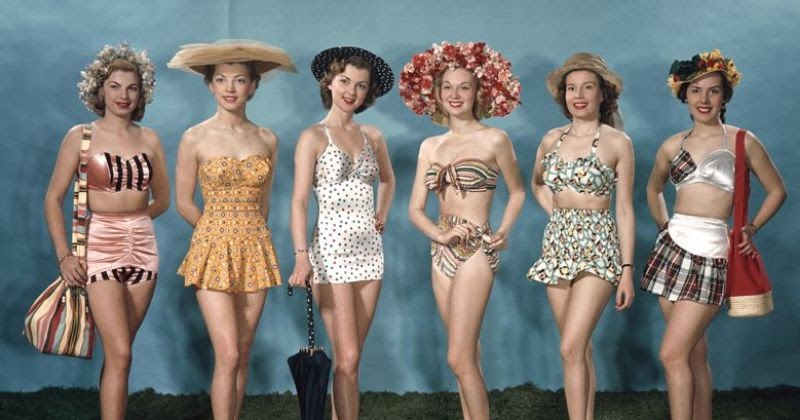 By the early 40s, swimsuits began to look like short dresses. They consisted of a halter top and a free short A-cut skirt. The straps became thinner and the necks a lot lower than the previous decades. These suits covered only up to the upper thighs. By the mid 40s, the one-piece swimsuit became a two piece, consisting of; the halter to and the short A-cut skirt, or in some cases, some shorts.

By 1946, Louise Reard created the first bikini. It was a two-piece consisting of a bra or bandeau top and a bottom piece which covered only what was considered a lady’s ‘unmentionables’.

For males, the shorts became more popular in the 40s.these male shorts were cut a lot lower than usual and were made of wool until the rayon-spandex gained popularity. Due to the Second World War, fabric was being rationed, so the world had to learn to be creative with fashion. 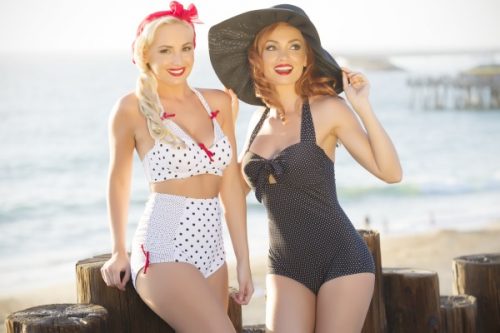 By the 50s, swimwear experienced very limited amount of change in style. The fabric was what evolved. Nylon and elastic were now being used to create swimwear which would dry faster.

The bikini began to gain popularity and more usage, especially as celebrities like Brigitte Bardot began to appear on screen wearing them. Although it was still considered indecent at the time, advocates for the bikini maintained that it couldn’t be considered a bikini unless it could fit through a wedding ring.

By the mid 50s, Christian Dior created a halter dress suit which was ideal for the conservative look which a number of people still maintained at the time. 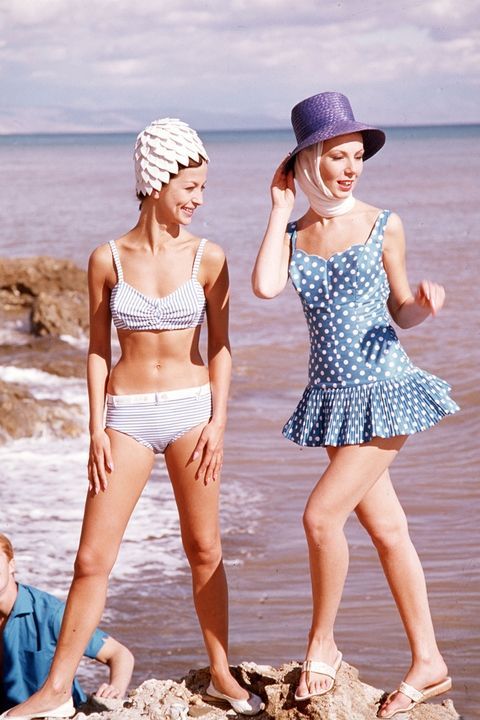 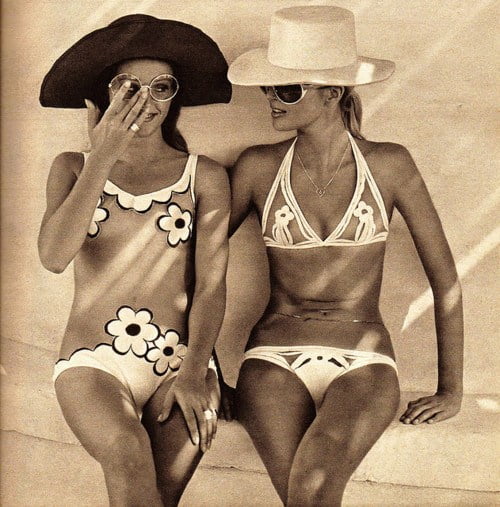 The 60s emerged with more tight-fitting suits. The one-piece became shorter, while the bikini continued to become a part of swimsuit fashion that was going nowhere. Lycra and nylon became popular, making suits a lot tighter than the previous decades. The monokini also emerged in the 60s, from the creation of Rudi Gernreich. It was called the swim suit without a top. It had a low bottom half, a small covering around the breast and a string to tie around the neck, leaving the entire back open.

The crotchet bra emerged in the 70s. The swimwear fashion had fully embraced the bikini so it was seen created with different fabrics; knits, fringes or crotchet. Swimsuits were available in a variety of patterns and colors for both men and women.

By the 80s, ladies were highly influenced by Baywatch, so the simple one-piece swimsuit came back into fashion. Bold colors were also widely used in swimwear fashion by this time.

Facebook Twitter Pinterest linkedin Telegram
The bathing suit of the 20s was originally made of wool. In the 1920s, the idea of going to the beac...

END_OF_DOCUMENT_TOKEN_TO_BE_REPLACED

Plus Size Swimwear: How to dress Slimmer in 1950s Vintage Style

END_OF_DOCUMENT_TOKEN_TO_BE_REPLACED

1920s Swimsuits for Women: To Be Modern Mermaids