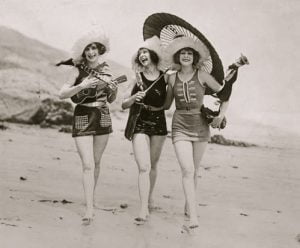 The swimming suit has been evolved through the decades. The bathing suit. The swimsuit. Even the name has changed over time. From full-shade dresses to barely-there bikinis, swimwear has defined the decades with iconic style. In the world of 1920s fashion, swimsuits for women was a new start in the history.

In the 1920s, the swimsuit had a more complicated place in the culture and among women. It freed women’s limbs not only for the male gaze but for women’s own pleasure. It symbolized a modern, athletic womanhood, an emancipated female sexuality, a personal liberation.

History Facts of the swimsuits in the 1920s 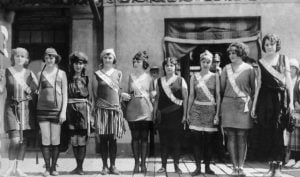 Since the early 20th century, swimming was regarded as a legitimate leisure activity. The birth of Miss America capitalized upon the revolution in women’s swimwear that occurred in the early twentieth century. The clothing made specifically for swimming became the norm. Since then, swimwear has become increasingly more scanty and form-fitting, despite the objections of conservative elements in the community and moral campaigners, and the use of hi-tech materials has become more common. 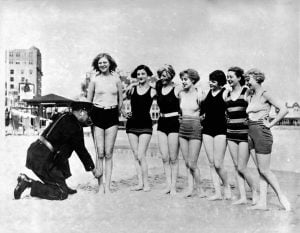 During the 1920s and 1930s, people began to shift from “taking in the water” to “taking in the sun”, at bathhouses and spas. And swimsuit designs shifted from functional considerations to incorporate more decorative features. Women ditched the long sleeves and skirts to show a little skin, but shorts still had to meet a certain length, or else they would be fined or arrested for wearing one-piece bathing suits without the required leg coverage. But women continued to have swimsuit regulations enforced on them in the 20s. Throughout this decade, women had to be careful to make sure their suits weren’t too short or too revealing since beaches had certain swimsuit regulations designed with modesty in mind. 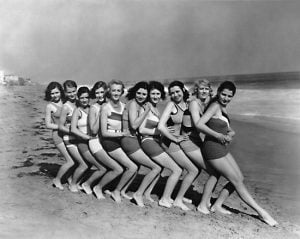 Though the loose, floppy bathing costumes persisted for some until the 1920s swimsuit designers began to create suits that were more practical and comfortable. The suits of competitive and serious female swimmers lost the skirts in the early part of the century.

In the 1920s women wore close-fitting one-piece suits that resembled men’s suits. A small apron at the bottom of the suit remained for modesty.

By the early 1920s women’s bathing suits were reduced to a one piece garment with a long top that covered shorts. Though matching stockings were still worn, vintage swimwear began to shrink and more and more flesh was exposed from the bottom of the trunks to the tops of the stockings. By the mid-1920s Vogue magazine was telling its readers that “the newest thing for the sea is a jersey bathing suit as near a maillot as the unwritten law will permit.” 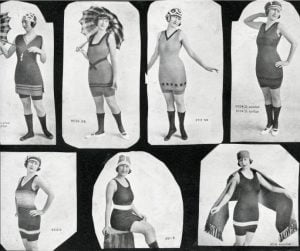 In the 1920s, it was normal to see a bathing suit made of wool. In fact, the wool skirts of a bathing dress would tangle around a woman’s legs and even drag her underwater in a strong current if she tried to swim in them. Thus designers came out of ways to improve swimsuits.

Rayon was used in the 1920s in the manufacture of tight-fitting swimsuits, but its durability, especially when wet, proved problematic, with jersey and silk also sometimes being used. Lastex, a new miracle fiber introduced in 1925 offered two-way stretch. The fiber consisted of cotton, silk, or rayon thread wrapped around an elastic core. 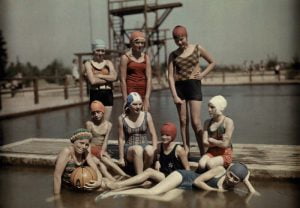 Women Swimsuits’ necklines in the 1920s

In the 1920s, swimsuits’ necklines got lower. As swimsuits became more practical, they also showed off more of a woman’s body. Deep boat necks or V-necks became more popular and armholes on suits got bigger. 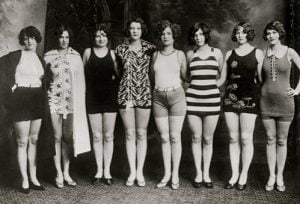 1920’s swimsuits varied from dowdy to sexy, from modest to brief. In addition, styles varied from country to country and within different parts of the decade.

By the 1920s, many women expressed open dissent against expectations and laws that they cover up arms and legs, even on the beach. Modern “mermaids,” as the press often called them, flouted the limits of old-fashioned decency. In the modern society, vintage swimsuits for women in 1920s style are still popular. Dress up and let’s hit the beach!