Which 1950s Ball Gown Dresses Looked Like A Fashion Design? 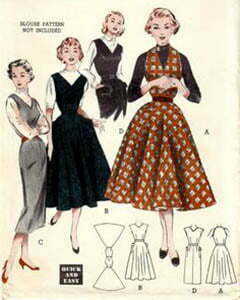 The 50s presented a new dawn for fashion as women had more purchasing power; there were more jobs and disposable incomes. The new look from the late 40s was the dominant silhouette with its feminine waspish waists and full tea-length skirts. The bust was in sharp profile with raised breasts, dropping to a narrow waist and curvy hips. This was the profile used for evening wear as well including ball gowns. It was romantic and glamorous. This look remained trendy until the mid-50s when designers started slimming down the skirt to a straighter profile.

The late 40s had seen a resurgence of the fashion scene. Fabric rationing was over and designers were ready to experiment with more luxurious designs. Exciting designs from designers like Cristóbal Balenciaga and Christian Dior were more opulent and not shy of using lots of fabrics.

Dior’s new look took 1950s women’s fashion by storm and remained trendy during the decade. Its voluminous skirt used up to 15 yards of fabric, which was shockingly decadent after the deprivations of the earlier years. Still, women found it refreshing because they yearned for something to mark a new dawn. They could also afford some of these glamorous haute couture designs. 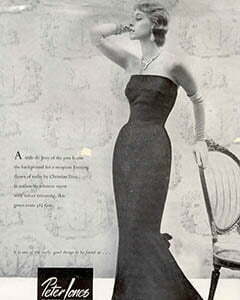 Ball gowns were of knee-length and had elaborate embellishments. The ball gown was for wearing to a gala, charity fundraiser, or the mayor’s ball. Many women had one or two reserved for the more glamorous events.

The strapless gown had emerged in the late 40s but it retained the narrow waist and voluminous hips of the new look dropping in an A-shape to the floor. The skirt became wider than the 40s look, with the use of layered petticoats. The more elaborate gowns were made of expensive satin, velvet, or taffeta which made them a bit heavy and uncomfortable to wear for a long time. Some designers used organdy, lace, or tulle to add skirt volume without adding much weight.

More elaborate ball gown dresses had gathers, draping, and bows at the back or the front in the bust area. Rushing was also used to cinch the waist and tiered lace. Sequins were also used to add a sparkle. Strapless gowns were usually worn with a short bolero jacket in public for modesty purposes.

The ball gown was designed for glamour, glitz, and vanity. Colors for the fall were rich ivory, silver, gold, emerald, and the classic black. The spring saw brighter colors like white, bright pinks, mint, violet, and blue hues. The ball gown was also popularly spotted in summer parties with floral patterns and bright colors`. 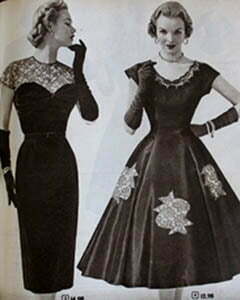 The new look was beginning to fade by the mid-50s. Designers like Balenciaga and Givenchy were experimenting with slimmer skirt profiles. The slim gown was long and sleek, retaining the tight-fitting bodice while the skirt was straight and sheath-like. Women were becoming less inhibited and necklines plunged deeper. The restyled gown had a low back embellished with a bow at the back. A narrow belt was used to highlight the waist.

One of the most popular designs was by designer Travilla, which was an ankle-length and in metallic gold. It was accessorized with matching gloves for a glamorous look. This style was copied by thousands of fashionable fans.

Some designs retained a curve in the hips by adding volume in the skirt’s back. This restyled look was a balance between comfort and sexy appeal. The hefty weight of a full skirt was reduced while the curves stayed. Some gowns had a flared bottom ala mermaid style while others had gathered at the knee level. 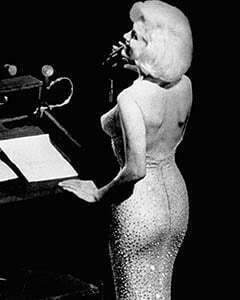 Tube gowns were usually strapless with a slightly dipping neckline. Some had thin straps or halter neck-straps. The long seek profile of the Grecian inspired gown that had emerged in the 30s stayed trendy into the 50s style dresses. The waist was high and empire style draping down to the floor. Many women found it appealing because its simplicity was flattering on most figures. It was practical to wear because the skirt was lighter and more comfortable to wear.

The tube gown was the preferred evening to wear to glamorous high society occasions like the Oscars. It could be spotted on glitzy celebrities like Marilyn Monroe.

One thought on “Which 1950s Ball Gown Dresses Looked Like A Fashion Design?”