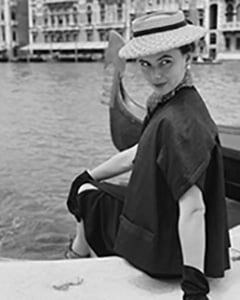 By the early 50s, economies shattered by the second world war were on the path to recovery, people had jobs and were hopeful. While a majority of women were still homemakers, being fashionable was a sign of celebrating family success and women indevoured to be as fashionable as possible. Fashion designers did not disappoint and continued to innovate trendy designs for women’s fashion. Dior, Balenciaga, McCardell, and Charles James were the names gradually making their mark to join established fashion houses like Coco Chanel. The designs were feminine and glamorous while veering a bit towards the formal. Women needed to be fashionable at all times; at home, going shopping, or a school event. 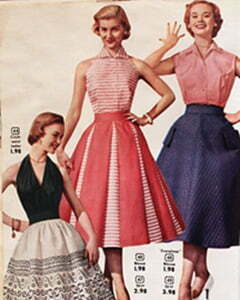 The ‘new look’ from the late ’40s continued to have a big influence on 1950s women’s fashion. This look was featured rounded shoulders, narrow high waists, shapely busts, and shin-length flaring skirts. This dress usually came with buttons down the whole front, or from the waist up. This gave rounded or v-shaped necklines. Women were becoming less inhibited about showing some cleavage and necklines plunged deeper as the decade progressed. The 50s dress showed a bit of cleavage This look was popular for both formal and casual wear. This silhouette was restyled several times in the 50s but a cinched waist and full skirt remained the highlights.

This full skirt of the 50s style dresses was borrowed from the Victorian era in which floor length full skirts that skirted the floor were fashionable. While the Victorian dress used rigid material crinolines to give the illusion of full hips, the 50’s dress was muted and without the exaggerated hips. It was also shorter, reaching to the shins with a billowy look.

This flared skirt was popularly known as the ‘swing skirt’ and could be worn in a variety of tasks during the day, at home, or work. While home dresses were made of cotton and lighter materials for comfort, more formal dresses for work were made from heavier fabrics like tweed, wool, corduroy, and synthetic materials as well. Synthetic materials like chiffon and rayon became more widespread. Patterns and motifs went with the seasons; dark and muted colors for the colder weather, flower prints, lime greens, and blue hues for warmer weather. White was a color for all seasons.

The cocktail dress appeared in the 50s. It was a cross between the swing dress of the day and elaborate evening gowns. It was shorter than the gown but elaborately embellished like the gown. 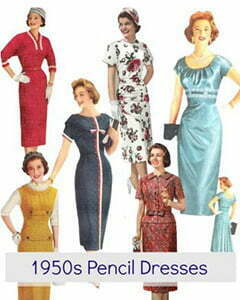 The 50’s skirt silhouette became slimmer as the decade progressed. The straight cut suit was popularized by designers Balenciaga, Dior, and Charles James. For Dior, this was a bit of a turnaround as he had the new look with its billowy skirts. The straight cut quickly became the preferred style for the haute couture and formal wear.

The top retained the rounded shoulders and high narrow even as the skirt became narrower. The skirt reached below the knees with a narrow bottom. The new-look was popular as formal wear as it gave a more formal look than the commonly worn billowy swing skirt. Besides, the narrow skirt was a bit impractical for working around the home.

Formal dresses were worn by women who were accessing office jobs in increasing numbers. The skirt suit remained popular for women, which was wearing a matching skirt and jacket. But full-length dresses could also be matched with a suit jacket for a formal look. Plus size formal dresses could be found labeled as ‘stout.’ Some bold designs went against the grain and did away with the waistband for more generous proportions.

Formal dresses were more muted in color than informal dresses. Prominent hues were greys, creams, pastels, and blues. Strapless slim-fitting cocktail dresses appeared towards the end of the decade and quickly became trendy among the glamorous crowds. 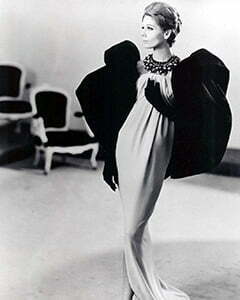 The glamorous looks of the 50s featured lots of jewelry; women could afford more expensive pieces like pearl necklaces, precious stones, and diamonds. These were prominent pieces that announced luxury and a sense of fashion. After the terrible 40’s women yearned for the finer things in life including haute couture wear from prominent designers like Balenciaga and Chanel.

END_OF_DOCUMENT_TOKEN_TO_BE_REPLACED

Facebook Twitter Pinterest linkedin Telegram
The tall sleek silhouette of the 30s was still in vogue at the start of the 40s in the US. The ideal...

END_OF_DOCUMENT_TOKEN_TO_BE_REPLACED

1980s Plus Size Fashion Guide: Freshen Up Your Wardrobe

END_OF_DOCUMENT_TOKEN_TO_BE_REPLACED

Plus Size Fashion Trends in 1950s-Perfect for Larger Body

END_OF_DOCUMENT_TOKEN_TO_BE_REPLACED

Plus Size Dress Is A Very Important Invention In 1920s