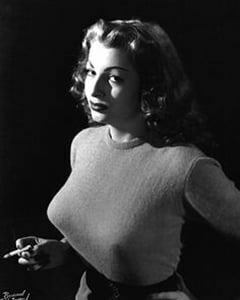 The ‘sweater girl’ look made popular by trendy Hollywood girls and pin-up girls were big in the 50s. These bold young ladies took to wearing sweaters one or two sizes small to accentuate their busts, which gave the otherwise dour sweater a sex appeal. These were the ‘sweater girls’ notable them Hollywood stars Lina Turner, Jane Russell, and Jayne Mansfield. Hollywood had been setting the fashion since the 30s, and these girls set a new trend with their form-fitting sweaters and busts that could not be ignored. The bullet bra added the sauce to this look, making pointy and provocative busts that were almost scandalous in the 50s era. 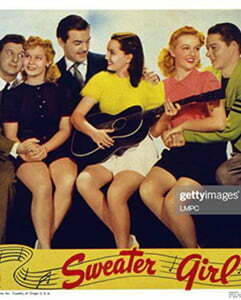 50s women fashion retained some traces from the 40s and even the 30s. The 50s sweater was a refinement of a trend that had started back in the late 30s. Lana Turner’s appearance in a tight-fitting knit sweater in the 1937 movie ‘They Won’t Forget‘ sparked a new interest in knit sweaters as fashion magazines dubbed her look the ‘sweater girl.’ A movie titled ‘Sweater Girl’ came out in 1942 starring Betty Jane Rhodes and June Presser. The sweater girl look was innocent yet sexy and provocative.

The bullet bra was one of the best lingerie innovations to happen in the 50s. It was designed to lift and separate the breasts to give a pointy look. It was a huge trend and remains one of the most favored bra designs to date. But modesty was still desirable in the 50s, so a bullet bra was worn with a form-fitting sweater. 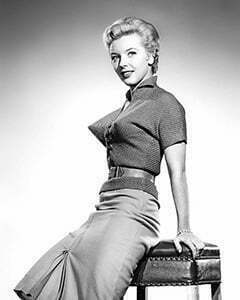 The sweater set was a matching cardigan and a sweater top. Some ladies wore a mix and match pair. The cardigan came with buttons to allow for opening a button or two as needed. Sweater tops also came with clips at the top of the button line. The clips could be fastened to allow the sweater to be draped around the shoulders without buttoning up.

Necklines were either high with a rolled collar, or V-shaped on cardigans. The overall look for the sweater girl was clean and minimal; a touch of lipstick and a set of subdued yet classy earrings completed this minimal look. 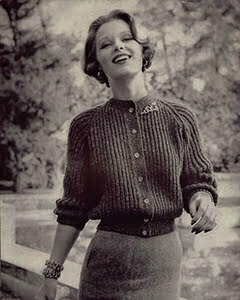 Synthetic fabrics were increasingly used in 1950s women’s clothing. These were nylon, orlop, ban-lon, dracon, and tycora. These were blended with wool, cashmere, and rabbit fur (angora). Orlon sweaters were most favored because the material did not shrink after washing. These synthetics were poor in taking dark dyes which limited their colors to white, pastels, and other light colors.

Sweaters could have designs knit into them. Many store-bought sweaters sported colorful animal prints, floral patterns, and other fun themes. More expensive sweaters had milk beads on the lapels and collar. But many home-knit sweaters were in plain bright colors as knitting designs into them was a bit difficult and tricky. Some ladies preferred the older styles with contrasting trim and checks. 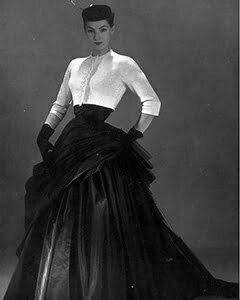 The new look by Dior was big in 1950s women’s fashion and trended up to the late 50s. The boxy look was dropped for rounded and soft shoulders. The ‘sweater girl’ look with form-fitting sweaters was perfect to wear as part of the new look. Wearing a tight-fitting skirt with a voluminous skirt was a chic look in the 50s. They were comfortable, warm, and did not need to wear a corset. The new look was received with mixed reactions because of its focus on a narrow waist for the perfect figure but a big hit with younger women. 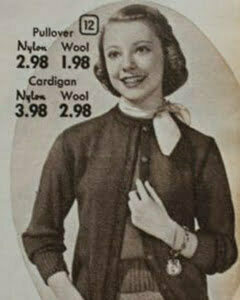 The sweater girl look was a big hit with teenage girls as they followed their favorite Hollywood sweater girls. Almost every girl had a sweater in her closet. It was fashionable for some time in the early 50s to wear cardigans backward before a majority of teenage girls switched over to pullovers. Another fad was wearing a silk or chiffon scarf on the neck with a sweater set. The scarf was usually tied to the side. It became common for teenagers to wear pullovers to school, a trend that remains to date.