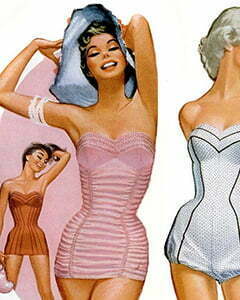 An idea that had begun rather hesitantly in the 1940s evidently touched the roof with a darling collection that was launched in the 1950s. Women’s fashion for swimwear in the 50s chucked the last modicum of modesty that domineered principally throughout that era. The swimsuits began to lose the straps that tied at the neck or went over the shoulders as a bra-top. The shapes were getting slimmer, accentuating the curves and leaving little to the imagination.

The 1950s swimwear collection has come back today, in terms of style, fabric, and colors. Let us relive the era that challenged its norms quite vocally.

The Princess Bathing suits came in a variety of one and two-pieces, often involving ruche fabric on either side to enhance the form. A zip-up backside option further optimally accentuated the body shape. This technique is widely employed even today.

In the late 1950s, the baby doll swimsuit introduced another version. These had a bow stitched just below the bosom, with ballerina skirts as another interesting addition. The newer version also had the empire waist, which was featured popularly in the 50s dresses as well. 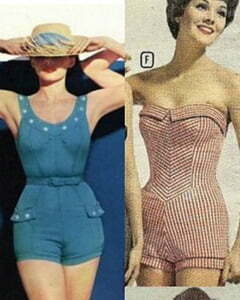 With a number of tantalizing one-piece swimwear variety, women were often spotted donning them doing activities other than swimming. Some of these had pockets; some looked like a sexy, strapless dress and some could be worn with an adorable headgear.

The fabric that the swimwear used in the 50s was nylon blended with jerseys. These were also specifically made elastic to provide optimum convenience and facilitate users with a fast-drying mechanism. Lastex, developed in the 1940s, was also chiefly used to manufacture the swimwear and had a rubbery feel to it.

The fashion designers in the 50s focused their swimwear collection on outlining the curves but not involve any lumps. The tops were lined, with a knitted feel, and firmly hugging the chest. Some of the bathing suits were worn with rubber panties underneath to iron out the bumps and firmly embrace the form. In a critic’s opinion, these were more about looking ravishing than actually having a comfortable dip. 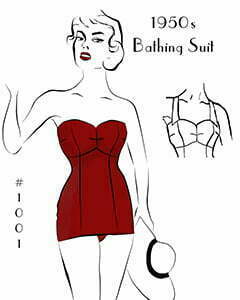 As far as the colors are concerned, the swimsuits were actively manufactured in bright and bold colors. The shades were picked in relevance to the complexion – for white women, hot red bikinis and tantalizing black were common. The darker females opted for nude and light colors to make a stimulating contrast. Swimsuits also had interesting patterns including candy stripes, gingham checks, and tropical themes.

One-piece bathing suits ruled the 1950s amass, while the high-waist bikinis came at second. Ruche fabric in elastic jerseys was the loved fabric that flattered their big busts and voluptuous hips.