1920s Mens Fashion Outfit – A Trip Back In Time 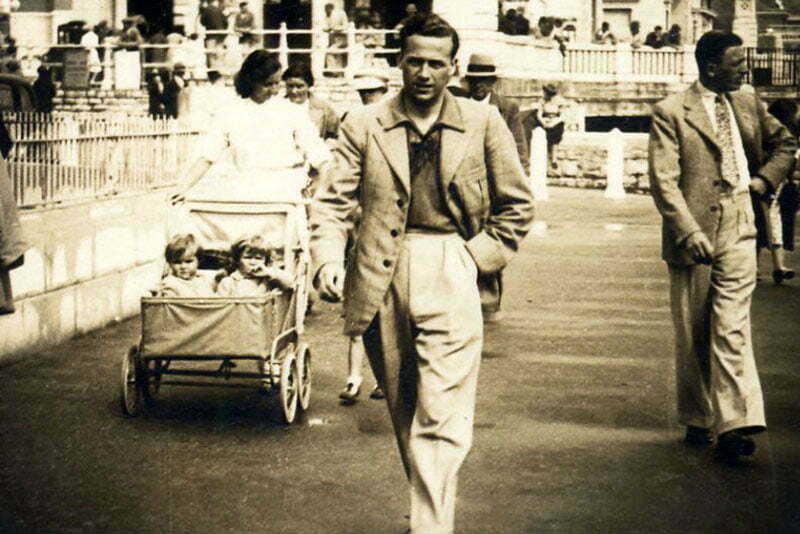 Sleek suits, fedoras, two-tone sunglasses, cigars, and perhaps a gun formed the signature look of the 20s flashy gangster epitomized by Al Capone. It was also the decade of suave gentlemen as depicted in Peaky Blinders, Downtown Abbey, and the Great Gatsby, setting the trend with their newfound flashy sense of fashion. The roaring 20s were seeing a monumental shift in culture and fashion, as people tried to leave the trauma of the war behind. Big parties and the clubbing culture were emerging, where both men and women stepped out in their best. Cross-Atlantic influences on fashion on both sides were seen; the oxford suit from England, and the knickerbockers from America. 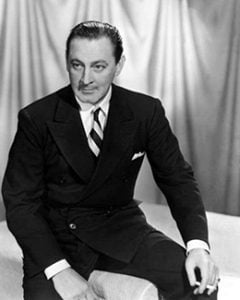 The neutral colors of the 1910s largely crossed over into the 20s for formal wear; black, grey, and navy blue was the most common. But this lack of variety in color also had to do with the fact that mass fabric production was not yet fully efficient. Men with deeper pockets were able to afford the scarcer lighter colors, hence bright tones and hues were synonymous with affluence. The Great Gatsby, and his cream suits, is the ultimate image of the well-to-do gentleman of this era.

The classic 3-piece double-breasted suit in black or grey was very popular. The collars were high and the coat had three or four buttons in front, that buttoned a bit higher than today’s jacket. The lapels were medium width with notch cut-outs. Suits for everyday wear also saw flannels and corduroys, patterned in plaids, chalk stripes, and checks. A matching waistcoat in the same color and fabric as the coat came with the 3-piece suit. Tweed was the most common fabric for everyday wear, as it was appropriate to even in colder weather. For warmer weather, men who could afford it wore linen in ivory, summer white, and velvet burgundy.

The late 20s saw the emergence of the Oxford suit in England. This was a baggy suit popularized by oxford students who took to wearing wide-legged trousers over breeches (knickerbockers) which were banned on campus.

Trousers were cut in fuller high-waist fashion, with pleats. The leg width was a bit loose and in straight form. However, trousers of the Oxford suit were baggy or several sizes oversize in the leg, which then tapered at the bottom. Almost all trousers of the 20s featured a turnup on the cuffs. 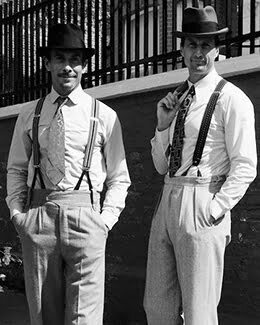 Shirts were invariably made from cotton and mostly came in starch white color. The collars were detachable to enable replacement when they wore out. There were holes in the shirts for collar studs. Pin collars were popular for highlighting the tie, and later spearpoint collars with collar clips.

The informal tie of the 20s was meant to make a statement. It was wide with a variety of patterns including plaids, paisleys and graphic checks. 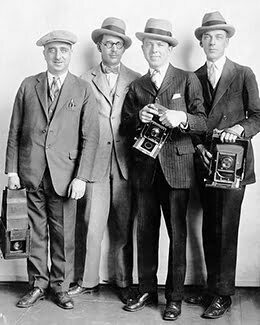 Boots, Oxfords, and brogues were about the only types of shoes available form men. Interestingly, brogues were considered casual or ‘sporty.’ Boots came in genuine leather, while patent leather was beginning to be used for oxfords and brogues. Brighter suits well with loud oxfords; white uppers on light tan. 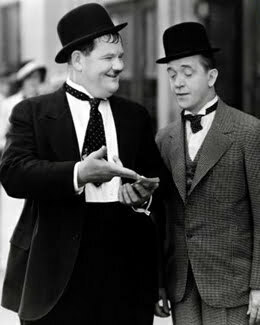 A hat was a big statement about a man’s identity. There was a variety of hats ala Downtown Abbey, for different occasions, formal and informal. Upper-class men retained the top hat in the early 20s, while the working class and the younger men wore wool or tweed flat caps. Wealthier men also wore the flat cap for casual activities like hunting. Cloth fabric homburgs were worn for formal occasions by the middle class, and the felt bowler hat for casual wear. The straw boater was popular in the summer for its light feel and broader brim. The fedora became popular in the late 20s and was typically made from felt. The gangster look favored the slanted white fedora with a black sash. 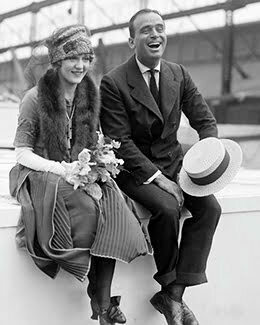 The military experience of the 1910s had a big influence on hairstyle well into the 20s. sharp, clean and neat hairstyles were almost mandatory for men. The Peaky Blinders look features short back and sides with a center or side parting. This was achieved by having an undercut on the back and sides and leaving longer hair on top. Many men used shiny pomades to give a glossy look. many men sported neatly trimmed mustaches.

The suave gentleman of the 20s had a variety of accessories befitting the class. Upper-class men carried a cane. Almost all men carried a pocket watch with a chain, and pocket squares on formal suits. Smokers carried a tobacco tin, and a pipe. Other accessories included sunglasses, cuff links, tie pins, and collar bars. Those who could afford had them in gold or silver. For many men, suspenders were preferred for everyday wear, and leather belts for formal occasions.