The roaring 20s fashion for men had a turnaround from the conservative clothing style to a less formal clothing style. Before 1925, men’s fashion was influenced by the World War I and Jazz, and after 1925, their clothing was less formal, also reflecting their social class. Suit and hat was the most common piece of clothing in the man’s wardrobe, and no man went out of his house without a hat on. Everyone owned a suit irrespective of their social class. 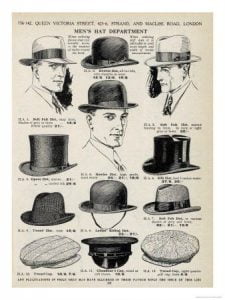 The Hat was an important clothing in the 1920s men’s fashion, every man wore hat irrespective of their social class. There were different kinds of hat available for different class of people. The upper class wore top hat and homburg hat, while the middle class wore the fedora hat, trilby hat, and bowler hat. For summer everyone wore straw boater, and the working class wore newsboy cap and flat cap. 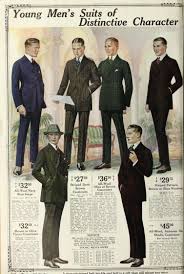 Suits in the 20s were made with thick wool, mohair which made them lighter than the previous decades, but compared to the kinds of suits available now, they were heavier. Men wore suit every day, during the day, to work, parties, and at night. Men’s suit was a three-piece suit, a tightly fitted jacket with wide lapels, a vest, and trouser. Tuxedo with matching dress shirt, a white silk handkerchief, a bow tie and top hat with matching shoe was worn to formal events. Wealthy men wore light colored suit. 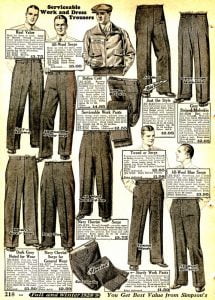 Early 20s men wore high rise trousers with a slightly tapered leg, but got wider through the years. Knickers, a baggy pant that fits on the waist and tight below the knee was initially a sportswear, especially for golfers, men started wearing it for other non-sporting events, and during summer because of how comfortable it was. The plus four evolved from knickers, and became popular. Knickers wasn’t embraced by everyone, this inspired the Oxford bag pants. The Oxford bag pant had a very wide leg, totally different form the pants worn during the early 20s, which was slim fit. Dark blue denim was mainly used for overalls and heavy-duty work pants. 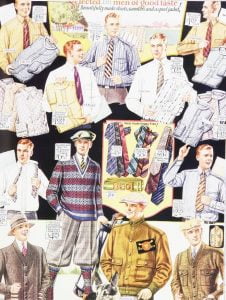 1920s dress shirts came in different colors and vertical stripes. The shirt collars were round, pointed, spread or buttoned down. Most were soft attached collars with either same material with the shirt or white collar which make the 1920 dress shirts unique. Casual shirts

Casual shirts were paired with wool trousers, coat, and a casual hat.

Shoes of the roaring 20s 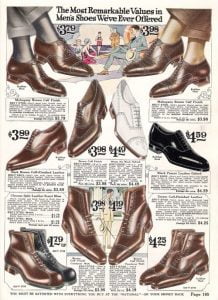 Shoes started coming in two colors, a new development from the previous decade which was just one color. The most preferred shoe was the Oxford shoe, which is dress shoe. Other shoes worn includes the boots and slippers, the slippers were worn after the day’s work. Spats were worn with shoes or boots particularly by the wealthy to protect the socks, shoes and boot from dust. Aside from its protective usage, spat were also a fashionable trend in the 20s.