The 1940s fashion statements and trends  are still loved by many people who are into uniquely styling their outfits and putting effort into making new statements with the help of the old ones. If you want to know more about the fashion and accessories of the 1940s, then you are in the right place, keep on reading to know more. 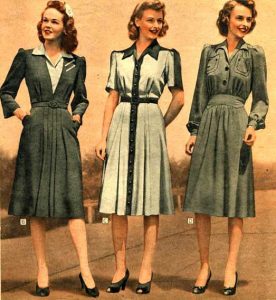 Most of the iconic outfits for women back in the 1940s had a stylish belt in them. There was a vast variety of belts for women so that they would be able to style different outfits without repeating the belts too much. Some of the belts were categorized as party belts, casual wear belts, and formal belts. The belts helped their waists appear slimmer and smarter. After the war, the supply for leather was cut short that is why women had to wear matching colored and fabric belts with their dresses. 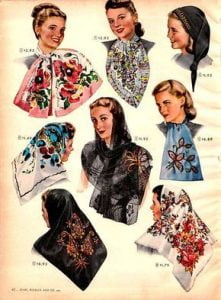 In the 1940s, the trend of wearing scarves around the neck or the front was moved to the trend of wearing them around the head. Most women wrapped a ‘kerchief’ or ‘babushka’ from the top of their heads and tied a knot under their chin. The scarves for summertime were usually made from silk and had tons of flower or leaf patterns printed on them. Some women just threw one end of the scarves over their shoulders for a laid-back yet feminine look. 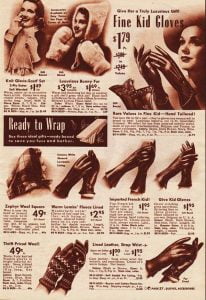 The daytime gloves for women back in the 1940s were usually made out of leather or soft fabric, some had fancy designs on them and some had decorated borders. The trendiest way of wearing long, elbow-length gloves at that time was to push the fabric down to the wrists for a more stylish look. The ruched effect was similar to the ones on the dresses or handbags for women. Back then, women usually wore gloves for special or fancy occasions to make the afternoon dresses appear fancy enough for evening or night time events. 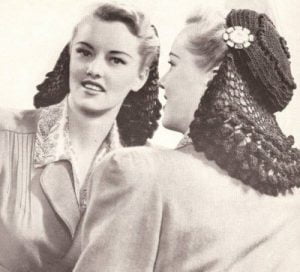 Snoods are very similar to hair nets but thicker and with wider gaps. Women in the 1940s used snood to collect all of their hair and gather them in the snood to keep them safe and compact. The snood usually started covering from the top of the head, then the back of the head, and ended at the nape of the neck. Snoods had been around for a long time but they became trendier in the 40s. The snoods in that time were crocheted by hand and were decorated beautifully by many talented women. 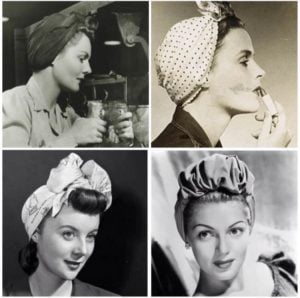 Turbans were famous for night time events back in the times of 1940s. the could be the perfect addition to a fancy party or formal event outfit. women usually decorated their turbans with fancy and shiny pins, brooches and pearl necklaces wrapped around them. The turbans helped women appear, classy, stylish, and confident while keeping their hair properly tucked away and away from their faces.

We hope that this guide helped you understand the fashion of the 1940s better and will further help you style your outfits accordingly and enjoy the old tips and tricks. Mix these up and keep on making statements as you go.