The tall sleek silhouette of the 30s was still in vogue at the start of the 40s in the US. The ideal profile for the American Woman was seen as tall and athletic. The militaristic tone of the era worked for women who were seen as robust and able to take on the challenges of the day. Women were increasingly working in factories and taking up more roles as the men were off to the war. However, plus size clothing but not publicized as much. The ‘stout’ category was sometimes sold separately in clothing stores and not available in some stores. Most women in Europe were deprived of nutrition during the war and didn’t have to worry about being plus size. Those that retained well-rounded figures mostly fitted their homemade garments.

The end of the war revived the fashion industry with designs that embraced exaggeration. Dior’s New Look accented the hips, which worked even better for plus size women. More variety in women’s fashion increased what was available for women. High fashion designer items for plus size women were readily available in the late 40s from houses such as Balenciaga, Norman Hartnell, and Digby Morton. 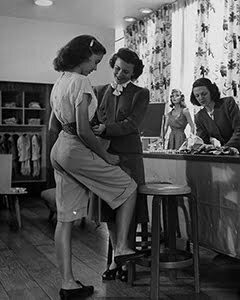 Interestingly, the US government-sponsored a study in the 40s to assess the size of the ‘Average American Woman.’ The study measured the dimensions of 15,000 women which was a too large sample to make a clear conclusion. Many fashion connoisseurs have opined that women’s sizes were generally smaller in those years. A dress of size 32-inch waist in the 40s could be a size 20 today. A size 38 bust in the 40s could be size 20 today. Women who were considered plus size could be considered average by today’s sizes. 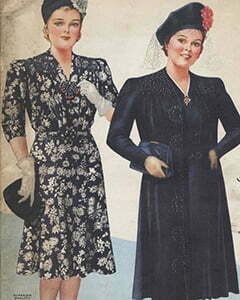 Plus size clothing was popularly known as ‘stout’ clothing in 1940s fashion for all people, with the other categories being juniors, misses, women’s, and men. The plus-size category was often in a separate section. Ordinary plus size women were featured in fashion magazines and catalogs wearing their real clothes. This was the decade that model photography was starting to take root, which showed outfits much better than the artistic drawings of the 30s.

The war and rationing of the early 40s muted the vibrancy in the fashion industry. Women’s fashion became plainer colored. Plus-size fashion came in darker colors like black, sailor blue, pine green, and wine red. Plus size dresses from the early1940s clothing had long pleats in front to make a vertical illusion that brought out a slimmer profile. But wartime guidelines for fashion limited the number of pleats that could be used in a garment to 3 for each garment. Trim was also restricted and usually made of the same fabric to limit visual contrast. 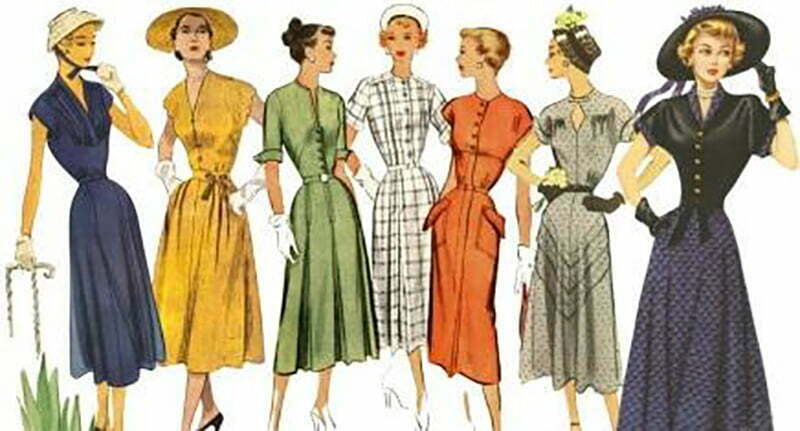 Other patterns used in plus size clothing were long stripes and prints, as well as small repeating floral patterns. Different designers experimented with different patterns and colors; medium green, medium blue, wine, and mauve were also popular colors for plus size clothing for the spring and summer.

Brighter colors seen in the summer included aqua and lighter hues of green and blue. The long vertical lines and minimal contrasting trims were retained in these brighter colored garments to maintain the slimming look. 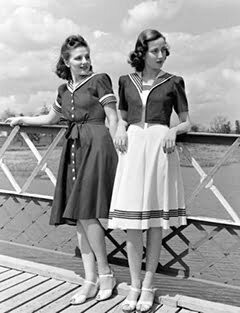 The New Look by Dior in 1947 was a big hit with plus size women. The flaring voluminous skirts were flattering for all hiplines of all women. Slimmer women had their hips and waistlines accented, while women with more generous curves seemed to fit naturally in the skirt with a romantic feminine figure. This look remained popular until the end of the 40s.