Like other things relating to 1930s women fashion, the world did not calmly accept the idea of women wearing trousers. Although the American society did not readily accept the use of trousers even when celebrities began a silent clamor for more equality between sexes, the French were far ahead of the game. 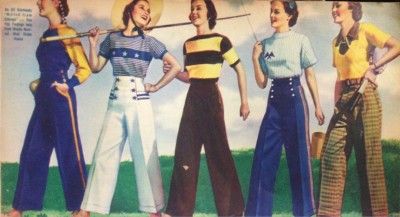 As of the 20s, women began to make moves towards more independence with the roles they played in standing in for their husbands during the war, they were able to gain the right to vote and be part of athletic activities. The involvement of ladies in athletics meant they would need more comfortable attires and although they considered what ladies wore in the 20s as ‘bloomers’ they were not regarded as a feat in the feminist fight.

Although Greta Garbo was acclaimed to be the pioneer woman celebrity to be seen wearing trousers, she was outshined by Merlene Dietrich who made heads turn and caused a complete uproar in the fashion industry when she appeared at a premiere of The Sign of The Cross on January 12th of 1932 wearing not just trousers but a complete tuxedo with a hat tucked to the side. Although her style was a bit of a shock to many, ladies in Paris had been wearing trousers for a while. 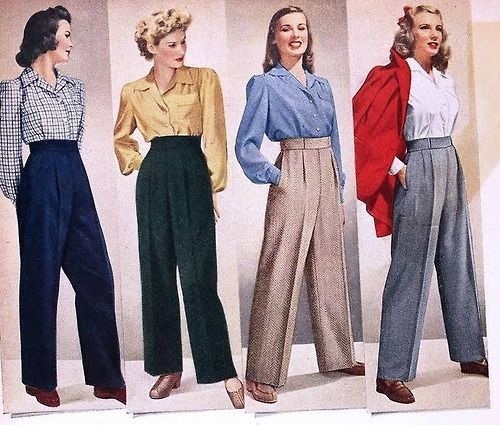 While some considered Marlene’s style choice to be provocative and a disgrace to her feminity, she considered it to be a fuss over nothing. She had on several occasions’ worn trousers and was believed to possess up to 10 trousers of her own, but her presence at that premiere caused more fracas than they would have expected.

In the same vein, Eleanor Roosevelt was photographed in 1933 wearing riding pants as she gave a morning speech on the South Portico of the White House. She stated that the even came a bit impromptu to her as she had only just completed her morning ride, however, with the ease to which she posed for photographs, many would say she had no qualms being spotted in public wearing the attire.

Women Trouser Styles of the 30s

Early 1930s saw the shocking reveal that women fashion was about to take a daring turn for ladies. Women trousers were mostly permitted for sports purposes but they were loose fittings, almost resembling long skirts. Thanks to Hollywood stars and the wealthy, the late 30s was met with a starting trouser phase for ladies.

Although they still lacked the proper fitting for the feminine silhouette as they were still on the verge of complete acceptance, they became more fitted and more of leisure attire than sports attire. The 1939 trousers became more form fitting around the waist and a lot more attractive as ladies began to comfortably wear trousers for outings and events.