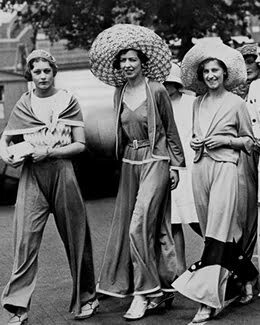 The society was still largely conservative in the 30s and women did not wear pants a lot. Women’s pants were fashionable items for special occasions in the summer and outings to the beach. High waisted wide-legged pants with a sailor look were popular daytime wear. The preferable colors were navy blue or white. For spending time on the beach, women wore beach pajamas or palazzo pants, which were very wide in the leg. These came in pastel hues and striped or checked prints. Sleeping pajamas were worn at home.

The fashionable way to wear pajamas was with a button-down blouse or tunic, and a matching belt. Beach pajamas and sleeping pajamas looked very much the same. Wearing pajamas at home was popular and preferred over nightgowns because pajamas were seen as less risqué. Pajamas were also practical as they allowed more freedom of movement while doing different house chores.

Lounge pajamas were not exactly meant for sleeping in but were leisurewear for outings, vacations, and other daytime parties. These pajamas were light and airy making them ideal for wearing in hot weather. They were interchangeably called beach pajamas or pajamas. This was a general term that also applied to jumpsuits with suspenders worn with a neck shirt or halter top. Backless tops were the height of fashion for a picnic to the beach.

The pants of the 1930s had the widest legs compared to any other time in the history of women’s pants. The waist was roomy but fitting, then the leg flared widely with pleats. Many pants had legs so wide at the cuffs that they completely covered the foot. 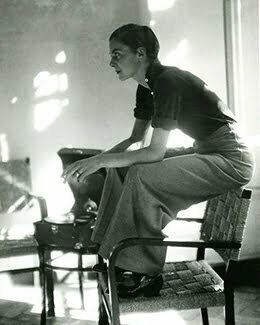 Women’s pants were ‘allowed’ for sporting events and vacations, but not formal occasions or evening events. However, adventurous women would occasionally wear them with a modest blouse for a trip to the market. These pants were welcomed as play clothes and not attire for going to the church or school events.

The jumpsuit featured a matching top and bottom. The tops had modest sleeves but could be backless. Non-pajama pants were also high waisted and wide-legged, but not as wide as pajamas. The sailor looks with big buttons on the front and striped sides were in vogue. The pants usually came with a cuffed hem.

There was also the culotte which was looked like a cross of a skirt and pant with wide flowing legs. It would be what is today known as the gaucho pant. Ensembles (matching items) were popular for financial practicalities as well, and it was common to see the culotte purchased with two matching blouses. Often, one blouse was backless and a bit ‘immodest’ for wearing to house parties.

It was also common to see women in overalls when working outdoors. More women were getting factory jobs, which demanded this practical wear. The denim overall was often worn for lounging around the home, as it was practical when chores needed to be done. 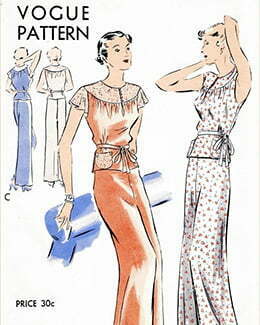 The economic difficulties of the 1930s limited fashion budgets, which forced women to become creative with DIY fashion. It was common practice for women to purchase fabric with sewing patterns to make their garments. Fashion magazines like Vogue would feature designs from Paris and Hollywood and have illustrations of sewing patterns for these designs. This gave rise to robust fashion knockoffs, which allowed women to imitate their favorite movie stars and celebrities for a fraction of the price.

Another unintended consequence of the financial difficulties was the slashing of prices on clothing. Fashion designers and clothing companies did not have much of a choice than make their items affordable if they wanted to remain in business. The innovation of cheaper fabrics like rayon and nylon helped make garments cheaper as well. The zipper was one of the biggest innovations in this period, and it quickly became widespread in all garments, even pants.

Mass production of clothes had picked up in the 1920s and was perfected in the 1930s. This made fashion trends to catch on quicker as women would rush to the stores to pick up a fashionable item they saw on a friend or celebrity. The trend of women’s pants went on to become mainstream as more women entered the workplace in years that followed, and eventually became widespread and common practice for women to wear pants.