The 40s were a troubling time for fashion as people had their attention on the war. Rationing also took much of the available cotton, leather, and other materials needed in the fashion industry. Governments encouraged their citizens to improvise, which led to a vibrant home sewing culture. The designs were simple and basic, following the guidelines of the government that encouraged economizing on fabric and other materials. The fashion industry regained its vibrancy after the war and the end of rationing. Sewing patterns could use more fabric, and there were more choices in both natural and synthetic fabrics.

Make do and mend 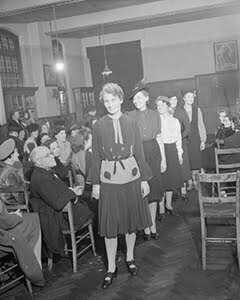 Rationing in the UK was harsher, which called for more improvisation. The UK government issued the ‘Make Do and Mend’ pamphlet which encouraged recycling old fabrics and prolonging the life of available ones by creative repairing and mending. This pamphlet contained comprehensive sewing patterns for all kinds of garments for children, women, and men.  In the US, there was the ‘Make It Do Until Victory’ slogan that also encouraged the citizens to get creative in homemade garments to help the war effort.

If you are recreating vintage clothing from the early 40s you could use the guidelines as they were issued for both women and men’s fashion. Here are some of the guidelines issued by the US government; 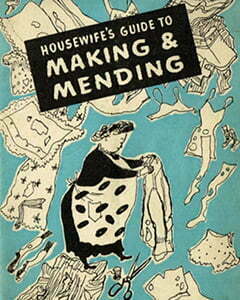 Even 1940s men’s fashion was not left out of the guidelines. These are guidelines for men’s coats for example;

Fashion magazines in the 40s 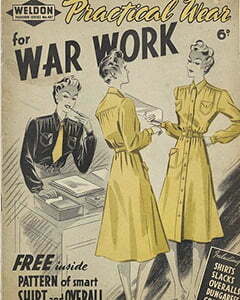 Sewing patterns were available in fashion magazines in the 40s. Publications such as Vogue were already popular for discussing trends for 40s women’s fashion. These magazines carried sewing patterns which their fans could use to recreate trending designs.

The Hollywood scene was a big inspiration for 40s fashion because movies were being released even as the war was progressing. Hollywood stars such as Katharine Hepburn, Bette Davis, and Joan Fontaine were closely followed for women’s fashion trends. Men actors like Laurence Olivier, James Stewart, and Henry Fonda inspired men’s fashion. 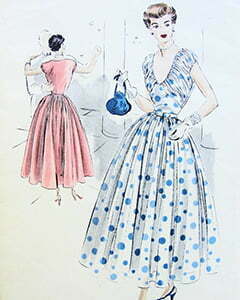 For the late 40s vintage look, Christian Dior’s New Look provides the perfect inspiration. This decadent and luxurious look with layered and rich fabrics was the perfect happy ending to this turbulent decade.