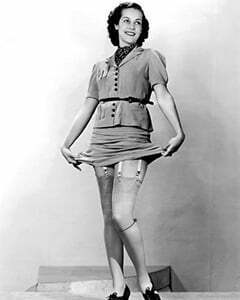 Did you know that women in the 1940s would not step out of their houses without a stocking on? It was considered offensive to be seen bare-legged in public, except for the pools and beaches, anyway. The 40s stockings were a novelty, because they were not silked as seen in the previous decades, and were rare to come by due to shortage of materials – no thanks to World War II.

Nevertheless, the stockings were a must in the 40s, and their rarity brought the elicit feel to them. These were stretchy, elastic, and made up of rayon or nylon majorly which looked impeccably exotic and appealing.

Let us have a look at the 1940s women’s fashion of stockings that always caused a stir, and went through many changes. 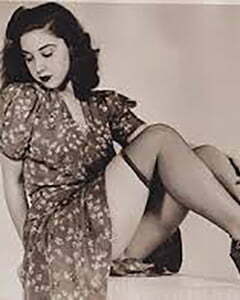 Women donned silk stocking in the 30s, but they were not as stretchable as the ones that were manufactured in the 40s. Stocking, also called the Hose, came with the garters or bands that began from the thigh and went up to the waist. Attached with a girdle or corset at the waist, these would be held up underneath the skirts. The garters were nothing like the elderly’s – these were decorative bands with bows that were strikingly tantalizing. Without the bands to keep the silk stockings up, the hose would glide down to the knees due to inelasticity.

Shaped to hug the legs like a sock, these were designed by the foot-size by the fashion designers. 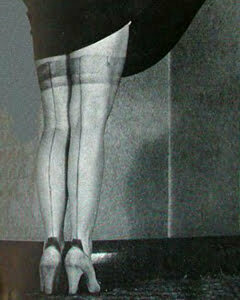 1940s stockings were nude-colored most often, while also subtly transparent. Since the decade was a time of the war, any available silk, rayon, or nylon was intensively used to make tents or parachutes. Therefore, any stockings that women possessed were kept with great care.

Rayon and nylon was a more popular fabric than silk in the 40s, which had an equal sheen to it that was spotted in silk. These stockings had a thick seam at the back of the leg that further appeared provocative and added on the femininity. Worn with a pair of high heels, the pleat went all the way up into the thighs and looked effortlessly flirtatious. Seamed stockings, therefore, were one of the highlights of the 40s in terms of hosiery. 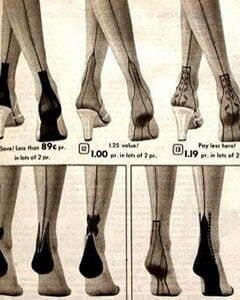 Rayon, silk, and nylon stockings were soon a luxury item in the 1940s, and women were forced to don them on special occasions only to avoid tear. The stock of hose was running up as materials were short, and the turn of events was soon leading up to scarcity. Consequently, women were enforced to step out bare-legged which they found extremely unwilling.

The cosmetics industry jumped right in at this time to fill the need for a stocking. The cunning minds of women huddled together to come up with an ingenious solution and avoid the offensive act of bare-legged appearances.

Initially, they stained their legs with coffee or gravy browning at home, literally drawing a line at the back of the legs to evoke the stocking image. Surprisingly, the hack worked! Nobody could deduce that the woman they were greeting did not have a hose hitched up. People were easy to fool with the homemade stains, and the plan worked.

As the word got around, the cosmetics companies discreetly offered women with a product that would tan their legs to the color of the stockings. This was the very first self-tan product launched in the 1940s and quite an effective solution to non-stocking arrivals. With a washable line drawn at the back of the legs using the eyebrow pencil, the hack was made successful.

Once the war was over, stockings were readily manufactured once again, and women went eagerly back to their fashion.