The bare midriff swimsuit was introduced to the world in the 1940s. Interestingly, the two-piece swimsuit was an innovation from the need to conserve fabric for the war effort. It was popularized by showbiz girls like Brigitte Bardot, who was bold enough to flaunt their curves. This would evolve into one of the most radical items in women’s fashion, which was the bikini.

The one-piece swimsuit was going fast out of fashion. The swimsuit of the early 40s women’s fashion served a better purpose of lounging by the poolside rather than swimming. It was made of rayon or rayon blends which became bulky and heavy when wet. Nylon and other light materials were largely unavailable to common buyers. Nylon swimsuits were available to the very select few and were almost exclusively made by DuPont. Lastex, which was a somewhat stretchy material was blended into rayon to make high-end figure-hugging swimsuits. Notable swimsuit designers of the 40s included Claire McCardell, Tina Leser, and Carolyn Schnurer. 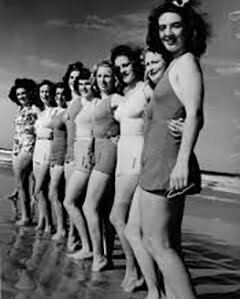 The one-piece swimsuit of the 30s evolved into a shorter and tighter version to look like a very short dress in the early 40s.  The top looked like extended to the back to look like a full coverage bra. It then dropped to slightly below the backside fitting tightly on the hips. An alternative design had short-like bottoms and a loose brief ‘swing ‘skirt. Some had halter tops with straps that tied at the back of the neck.

Some designs had a zipper that closed up to the shoulder line, while others had a space between the straps of the top and the waistline of the skirt. Some designers used boning in the stomach area to shape the waist area. A triangular hole was seen in some designs to show just the slightest hint of skin. 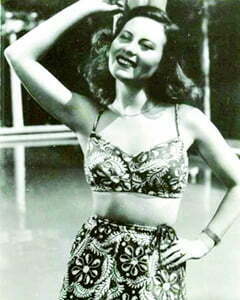 The rationing guidelines in the early 40s fashion required that fashion designers economize fabric as much as possible. Swimsuit designers started designing two-piece swimsuits that were briefer. This newer swimsuit looked like a one-piece cut in half. The top showed more skin, with only thin shoulder straps or halter strings. The bottom became shorter and tighter, although it still covered the entire backside. The space at the back-showing skin between the top and bottom pieces was larger baring more skin. The bandeau top did away with fabric and used only strings that started at the center front and tied at the back. 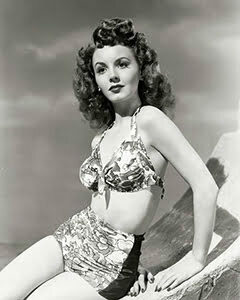 The bikini was an innovation of the Paris fashion scene. In 1946, designer Jacques Heim took away most of the fabric in the then two-piece swimsuit to leave a top that looked like a bra, and a bottom that looked like the tightest panties of the time but covered the belly button. He called this swimsuit the Atome.

Another Paris based designer, Louis Réard improved on the Atome by making it even briefer. The top had only triangles covering the breasts, with halter strings tying at the back. The bottom had a triangular piece covering the groin and another triangle covering the buttocks. This design bared the belly button and showed much of the sides of the buttocks. He nicknamed his design the Bikini after the island where the atomic bomb had been tested.

The bikini was too risqué and radical and many women shied away. Réard had to hire a nude model to showcase his swimsuit. Few women were bold enough to wear it even in the less inhibited French riviera. It was only after Hollywood celebrities were pictured in it that adventurous young women followed the trend.  Actresses like Ursula Andress, Brigitte Bardot, and Raquel Welch adorned fashion catalogs in this ‘scandalous’ thing and provoked other women to wear it. Most public beaches banned the bikini during the 40s. But its popularity grew and it remains one of the most loved women’s garments up to today.