The 1920s or The Roaring Twenties as it’s popularly called was the time of the rise of the New Woman. There was a revolution of all-female wear and the swimsuit was not left out. In prior years to the 20th century, women went to the sea-side to bathe in the shallow water. As it was considered proper to keep the skin white and untouched by the sun, sea-side dresses covered every inch of the skin. As women began to swim as a sport it became necessary for the swimwear to be made functional for swimming and it was an important addition to the 1920s women’s fashion. 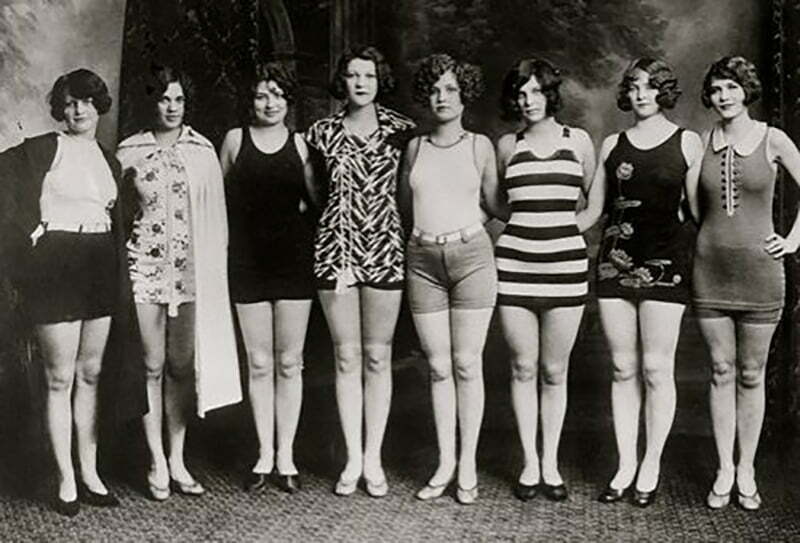 Annette Kellerman, an Australian swimmer designed a new style of swimwear for women, imitating men’s swimwear of that time. Her one-piece swimwear became the accepted swimming outfits in parts of Europe by 1910. The form-fitting style soon proved popular and thus started the swimwear revolution. The swimwear material changed from wool to a stretched ribbed jersey. The swimsuits  With these new swimsuits that showed more of arms and legs, the beaches in the United States of America made it necessary for women to wear stockings with their swimsuits to cover their legs and there was the beach police to enforce this rule. The beach police measured the distance between the bottom of a woman’s bathing suit and her knee. Culprits were made to either pay the fine of ten dollars or were hauled off to jail. 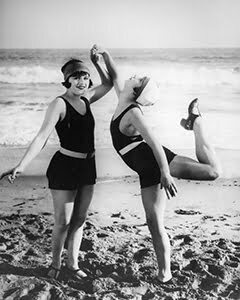 Despite the protests against the swimsuits by conservatives, they became popular and were designed not just for swimming but to also flaunt the female contours, which was the revolutionary idea of the roaring 20s fashion. Despite how revolutionary wearing the swimsuits were, the swimming attire was incomplete without the stockings, shoes, and rubber swim cap to match. The stockings were to cover up the legs that the swimsuit left exposed and the cap helped to keep the girl’s bobbed hair in place. Jantzen created a very popular suit in 1921 that looked like it was a two-piece. It looked like a tank top sewed onto a pair of swim trunks and came in vibrant colors like other sportswear. Belts were also used to help keep the two-piece suit from floating upon the water. 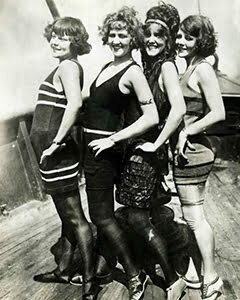 Every decade in the 1920s saw a major change to the swimsuit design. By the 1930s most of the modesty rules were lifted. The 1929 film, “Man with a Movie Camera” shows Russian women wearing early two-piece suits that expose their midriff and a few who are topless. Films of holidaymakers in Germany in the 1930s show women wearing two-piece suits also. Swimsuits have come a long way since the 1920s. One note to remember about the swimwear in the 1920s women’s fashion is that it paved the way to the present design of the swimsuit.