The roaring 20s fashion wear isn’t complete without the coat not being mentioned. In the 1920s women’s fashion world, coats were a must have in every woman’s closet. From Fur-trimmed coats, to winter coats, to overcoats, collegiate coats to lady’s raincoats and other types of coats, these coats were the real deal in the twenties. 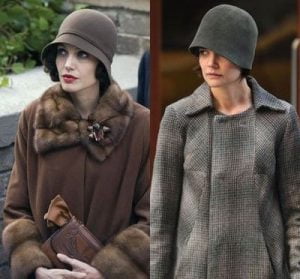 In the early 1920s, winter coats were the rave. The winter coat was made with wool and designed to be big in other to create a cocoon of warmth for the 20s woman. Some of these winter coats came with collars made of detachable furs, which meant that the owner gets to have a choice in wearing a fur-collared coat or a plain collar coat. These coats also came with big deep pockets, matching belts and large buttons, this is because the idea of the winter coat is to look oversized. The furs were made from beavers, mink, possum, sable, civet, Hudson seal, mole, rabbit, wolf-dog and so on. Winter coats came in somber colors like brown, black, grey and blue. 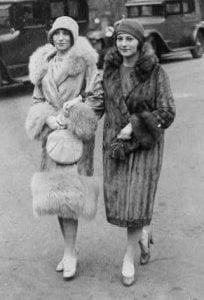 Later in the 20s, full fur coats were a must have for wealthy women. The animal used for coats reveals the class the woman falls into back then. If you were seen wearing a fox, possum, seal, beaver or mink coat, you are perceived to be of the upper-class. All other furs like weasel, dyed rabbit, skunk, morten, chinchilla and so on were considered middle or lower class style. Synthetic furs, that is, coats made from non-animal materials were also available for those who couldn’t afford to buy the real deals. 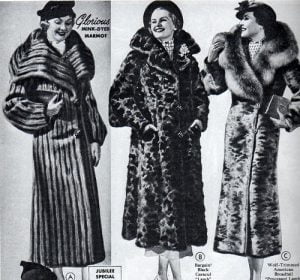 Raccoon fur coats were the best coats to have as a college student in the 1920s, as it was perceived to be a thing of class. Raccoon coats were a big deal in the roaring 20s fashion.  It was the jazz age; the college was a place where students took the jazz age seriously. The Raccoon coat was a must have fashion wear. Both the ladies and men in colleges wore the raccoon coats. The rave about the raccoon coat was really big as it spilled over to the next decade, that is, the 1930s.

Young women, teenage girls wore more of the collegiate coats. The collegiate coat was designed from the inspiration of the men’s wool trench coat. They also favored the single-breasted or wrap-over plaid coats.

Spring coat of the roaring 20s 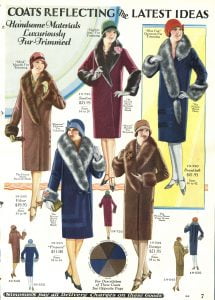 Spring coats were also the rave in the roaring 20s fashion world. These coats were much lighter, slimmer and even shorter than winter coats. some were even knitted sweaters but fashioned like a coat. Apart from the spring coat, there was also the spring cape.

Spring cape in the 20s

The spring cape was a fashion statement in the 1920s women’s fashion world. Some women wore these capes as a wrap on their evening dresses. These capes were tied by the neck and came in different textures and styles. Some coats came as a set, with dresses matching them. These sets were only affordable to the wealthy women. 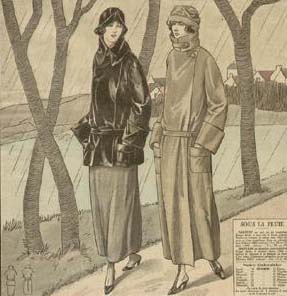 The raincoat also made a shine in the 1920s women’s fashion world. A woman must still go about her daily life, no matter the weather. A raincoat for a rainy day. Who wouldn’t want one? The ladies’ raincoat was a colorful rubber-coated or oilskin attire.  Rain capes were also available for the fashionable 20s woman. It was slitted at the arms and fitted like a poncho.

Coats in the 1920s women’s fashion world were the real deal. These coats were essential in the lives of 20s women. The coats in the roaring twenties fashion lasted well into the later decades and were a fashion statement year in, year out. No woman could go wrong with a coat, even till date.