Throughout the times, the feminine fashion world has witnessed a whole lot of beautiful styles and inventions. The roaring twenties is one of the moment changing times in the female fashion world.

The 1920s, which was amusingly referred to as the “roaring twenties”, was a time of emancipation for women. Ladies in this period made it known to the world that they were not to be trifled with. They partook in the things perceived only for men. 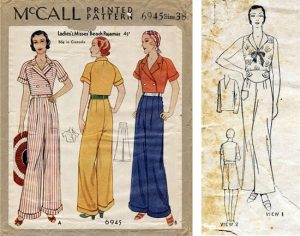 This feminine bravery was also inculcated in the way the women dressed during this period. The female fashion world witnessed the ravishing retouching of styles and looks. This boldness birthed the trend of females wearing pants in the 20s.

Women wanted to move freely in their attires and dance without jamming their knees together especially since it was the jazz age. Before pants became the rave in the 1920s women fashion world, it was a functional clothing used by the women at the factories where they worked. 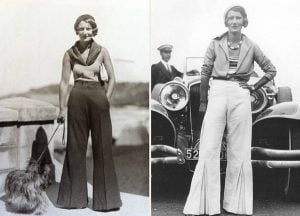 Coco Chanel will forever be praised and sent kisses for bringing the wonderful pant idea to the 1920s women fashion world. Coco, a liberating woman who loved having things simple and classy changed the game entirely.

Many people in the fashion world know Coco Chanel as an independent woman who brought about the well known “little black dress” and her signature perfume “Chanel No. 5” also had a hand in the acceptance of women wearing pants for leisure and not for working in the factory. This famous designer began designing pants for women for sporting, riding and other activities 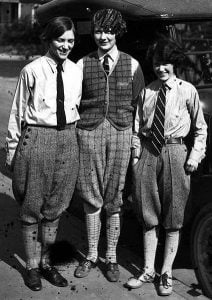 These sporting pants were called knickers. Women wore sporting wears during the roaring twenties which was acceptable because it was comfortable as it was always made of wool and it was designed to look baggy around the hips with the knee cuffed and bottled into knee length socks. These type of pants were worn by women who wanted to partake in rigorous sporting activities like riding, hiking, golfing and so on.

the beach pyjamas in the 20s 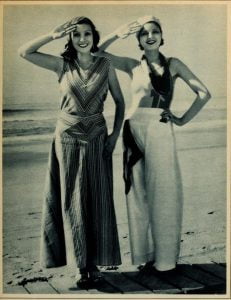 Later on in the 20s, the continental style was the rave in the 1920s female fashion world. Women now liked the feel of pants even though they were not worn casually. The Asian style became the new style of the season. The inspired Asian lounjama which was made with silk materials was a beautiful hit in the roaring twenties.

Accompanied, the beach pyjamas which looks like the modern day styled palazzo pants, was a must have for a woman in the 20s. The long wide leg pants were usually made with silk, cotton and other similar materials. They were paired with matching sleeveless tops and a wrap jacket to complete the look making the 20s woman ready for a day at the beach.

the gangster apparel in the 20s 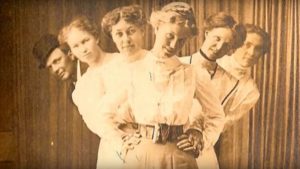 These pant styles were not all, just as it was said, the roaring twenties was all about taking the fun way and chance. It was the time when people took on daring and liberating moves.

The 1920s women’s fashion world witnessed an amusing journey on women’s pants. The emancipation of women in the roaring twenties lit a spark in the hearts of 20s women, thereby making the women free and open to enjoy what the world has to offer. The 1920s pants today are now considered vintage. Oh, let’s not forget the palazzo pants that are still much in style till today.

Vinatge Clothing for 1920s pants Near me