Makeup in the early 40s was a bit hard to come by because of the rationing of petroleum products which were crucial in the production of makeup. Yet even governments realized that the availability of makeup was key to maintaining high morale in the population. Women serving in military support units were especially keen on having makeup as the only reminder to normalcy. With many fashionable items unavailable, a touch of makeup was the best way a lady could make a statement that she was still holding her head up. Women improvised with locally available materials like beetroot to make lip rouge. But women in the US were more fortunate as the makeup industry thrived to some extent. Almost all women wore makeup and were encouraged to so. Hollywood had started making color films in the 40s. Women looked to their favorite Hollywood starlets for inspiration.

The majority of women in 1940s fashion wore a simple natural look rather than a heavy painted look. The look was simple but putting it on was a different affair. A woman had to blend the foundation for the right tone, apply eye shadow, rouge, and then powder. Depending on the occasion, the lady would also put on eye shadow and mascara. Lipstick was almost mandatory, even when at home. 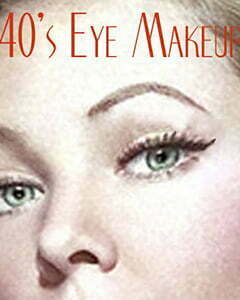 Eyebrows were not thinned to the extreme but only a few hairs removed to make the natural eyebrow arch perfect. Many women used petroleum jelly to smooth down the eyebrow hairs. Eye pencil was only used to outline the upper line of the eyebrows.

Most women went with minimal or no makeup on the eyes. Petroleum jelly could be applied to the eyelashes to make them lusher and heavier. Mascara was worn sparingly and came either in black or dark brown.

Eye shadow was exclusively worn with evening wear. It was worn in a neutral color to match eye color e.g. brown shadow for hazel or black eyes. A bolder look added a touch of gold or silver. Eye shadow was applied from the lash line to the brow when doing it for an evening event, and up to the top of the eyelid when worn during the day. 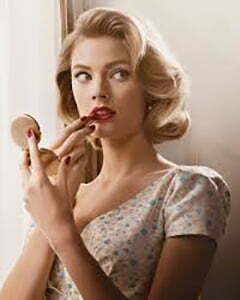 Foundation powder was creamy and heavy and almost all brands had a pinkish hue. Getting the foundation right was a matter of experimentation in blending. The foundation was often worn to the neckline to make it appear uniform. Foundation was helpful in holding powder on to the skin.

Rouge was the name used for blush in 1940s women’s fashion. The most commonly available shade was pinkish hues. Rouge was blended into the foundation for the ‘natural’ look, while raspberry, coral, and peach hues were used to create the bronzed look. Rosy cheeks were done by brushing rouge lightly with upwards brush strokes. 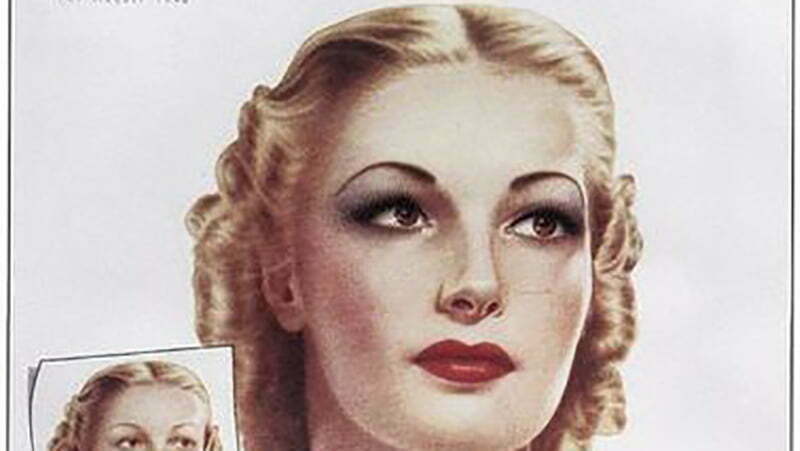 It was almost mandatory for a woman to wear lipstick in the 40s. It was available in shades of red. Lighter reds worked for bright weather of the summer or spring, while darker reds were worn in the fall. A dab of oil was applied before makeup, to keep the lips moisturized. 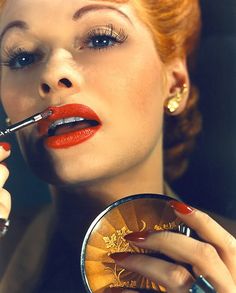 One of the most popular lip looks was the Hunters Bow lip popularized by Joan Crawford. This look made the lips the same size. Some thin-lipped women overdrew the lips to have a plumper pout, but many applied just enough to keep the natural look.

Women working in factories and other physically demanding jobs kept their fingernails short for practicality and safety. Generally, fingernails were filed into long ovals, and cuticles trimmed. Popular nail polish colors were rose, red, burgundy, pink, and mauve. The base of the thumb fingernail was usually left unpainted. Most women matched the nail polish color with the lipstick color. Retailers caught up on this trend and started offering the nail polish and lipstick as a set.