Women retained a more conservative sense of modesty in the 40s which frowned on showing too much skin, including showing too much of bare legs. Silk stockings were almost mandatory if any skin was on the show. These non-stretchy stockings were held up with a garter belt. Fitting into a pair was also a tricky thing because it was first woven onto the silhouette of a leg. Synthetic materials like nylon and rayon were still new and expensive.

Silk and nylon stockings went into shortage as the materials that made them were required to make gunpowder. Even discarded nylon and silk stockings were collected for recycling. This made the available stocks quite expensive for the ordinary woman. They were also flimsy and got easily torn. This made nylon stockings special wear for church and other special occasions. Some cheeky women resorted to using cosmetic leg paint and in the hard times, women in Europe made paint from cocoa, tea, and gravy. 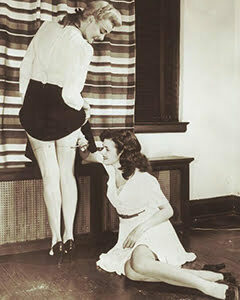 Rayon was the preferable synthetic material for many garments in 1940s women’s fashion. It could be made in a high shine to mimic silk for more expensive items, or a low shine to mimic cotton for more affordable items. Its main problem was that it was not stretchy. 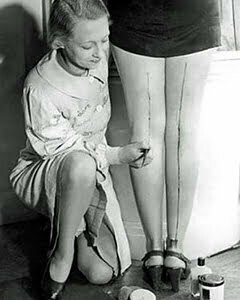 This was not a pair of stockings but rather a color stain on the legs to mimic nylon hose, which was in shortage. This colored stain was made from coffee, gravy browning, or cocoa powder. The biggest problem was drawing them on since a woman could not do it alone. The stains also run off when the skin came into contact with water. They also tended to stain clothes or upholstery when a woman sat.

What is Leg make up

Cosmetics companies started making leg cosmetics to offer a better look than homemade coloring. This could be drawn on better. Women could draw fancy patterns. Young women used eyeliner pencil to draw on a seam to make a realistic look. But it often required help to get the seam straight. 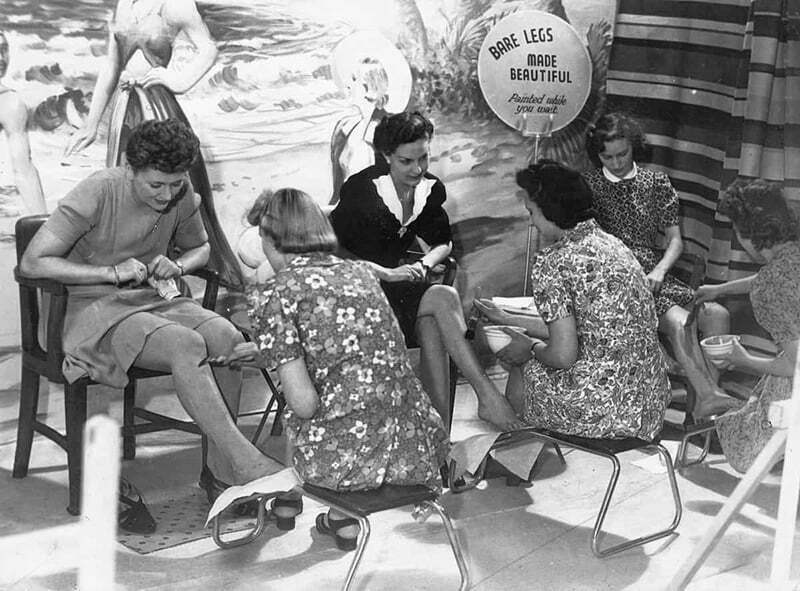 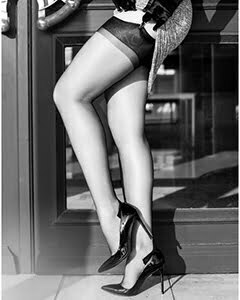 Nylon was relatively new material in 40s fashion which limited designers in working with it. The variety of stocking was limited to black and white hues. White-colored stockings were mainly worn by younger women and teenage girls. They were also worn for weddings. There were also ‘natural’ tone stockings. Sun tone was a golden tan suitable for wearing with brighter colored clothing in the summer. Taupe tone was a slightly dark hue that was ideal for wearing the darker colored clothing of the fall. Women with darker toned skins; African and Latina women, had a freer choice in color because their skin went well with all kinds of tone. They had a Cuban heel, which was a thick weaving at the heel that could not wear out easily.

Nylon stockings made a comeback after the war, although they remained a rare and coveted commodity. Women rushed the stores whenever news of availability was heard. But better quality and stretchy stockings became readily available towards the end of the decade.