Women are obsessed with fashion, clothes, and all the latest trends. Women’s passion for fashion has been prevalent throughout the centuries since the earliest of times. The ’40s were no different. It was a time when fashion started to become more glamorous. 1940s women definitely knew how to dress up.

The 1940s witnessed two different types of trends in women’s wear. From the start of the Second World War to the advent of the Modern Look in 1947, women’s skirts were knee-length with covered shoulders. Only a few ornaments on apparel were basic due to wartime restrictions.

Sportswear was much more fashionable and people used a lot of creativity in combining different clothes to make the outfit appear more versatile than it was. Handmade jewelry and fancy curls encouraged women to display their style freely. Apart from the signature 40s outfits, hats made out recycled cloth were all the rage.

To cater to your curiosity related to the 1940’s women’s fashion and all the famous trends from that era, we bring to you a complete manual on the historically famous outfits. 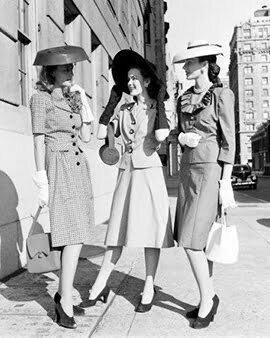 The scarcity of cloth contributed to the success of the two-piece suit known as the Victory or Utility suit. Women had the liberty to merge their dresses, tops, and coats for a different look each day. Even after the war, the suit stayed successful because of its convenience and feasibility.

The skirts were not pencil-shaped they were rather A-lined. It indicates that they progressively spread from the hip to the middle of the legs. Ultimately, the suit jacket was the core of the ensemble.

Jackets were produced from the same cloth as the suit. They had the same lined, broad back, high neckline, and poked in their waist with just a small twist at the edges. The bottom rim of the jacket hit the center of the hip side. 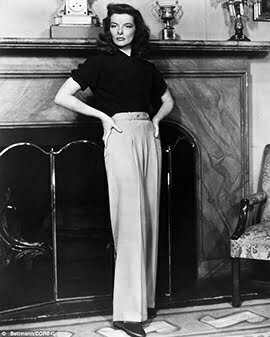 The next component of the outfit was Blouses. These may have even be worn as they were or with a soft sweater over them. The blouses were just a dark color or a dotted style.

They may be short sleeves like skirts, or long sleeves with puffed-up sleeves and thick, large sleeves on the wrist. Normally, they could be buttoned all the way to the bottom and had a tiny V-neck with a circular Peter Pan neck collar design. 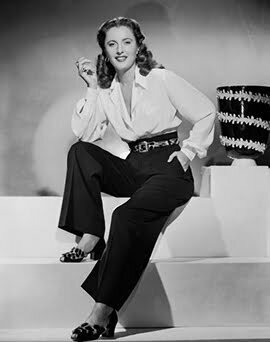 Pants were predominantly men’s dress until the 1940s. In the beginning, women just wore men’s pants. Later factories made trousers for ladies, although they were always very rugged like men’s trousers.

They had a really small belt, a button or zip down the center and broad legs with large cuffs at the foot. They were crafted from combinations of cotton, denim, or acrylic. 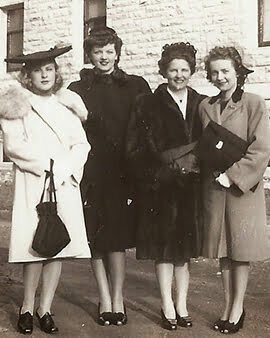 At the beginning of the 1940s, the jackets were very rectangular and generally white. There were a few wide buttons on the sides, smooth or cuffed short wrists, and a number of hemlines.

They went all the way down to the feet, to help stay insulated. Smaller box coats went down to the waist in a broad cape-like pattern with large bell-shaped sleeves. 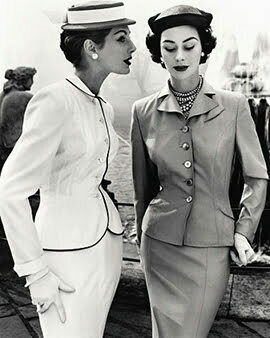 The headwear of the 1940s was rather varied. There were just a few different designs that had become the icons of the 1940s. The first was a beret. It was a small, flat, European-inspired hat that sat squarely on the top or twisted to the left.

The next hat was indeed a turban that consisted of a piece of material tied around the head and adorned with roses, bows, or gems. The women’s fedora hat was one of a few hats that was influenced by the designs of men’s hats. 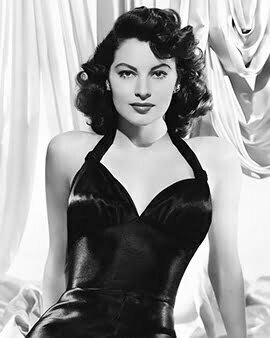 With the onset of the war and the stringent shortages of the cloth, the skirts grew shorter in the 1940s. While the 1930s had skirts lowered to mid-calf, the 1940s got them back to the knee level. The war impacted the top of the outfit, too.

The bodice had a neckline in a number of side panels. They were rectangle, split, keyhole, shirred, cross front, or V-shaped blouses. However, they didn’t have any cleavage. All the blouse styles of the dresses were simple, showing almost no skin relative to contemporary wear.

The evening dresses had spaghetti straps or halter tops that exposed arms and breasts with just slight cleavage. Skirts were lengthy and round in the early 40s and short at the end of the decade. 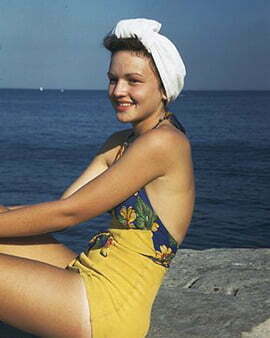 One-piece swimsuits were smaller, tighter, and more well-fitted than those of the ’30s. They came with padded bras and shorter shoulder straps. The neckline was a V, but it showed no cleavage.

The halter top design was also quite common. The bottom of the outfit was either skirt-shaped or somewhat like a loose-fit short. The Bikini was created in 1946 and it was identical in design but smaller and deeper in the chest.