The 80s were a decade for pushing the limits of fashion. Designs from the past were given a refreshed and amped up look with bold patterns and bright colors. It was the age of MJ’s “Thriller” and other music superstars like David Bowie and MC Hammer who were idolized by millions and their sense of fashion copied. Sequined tops were a hit as well as parachute bottoms. Children’s fashion followed that of adults closely. Pre-teens and teens were becoming more independent and bolder and expressing themselves in fashion was the easiest way to establish identity. 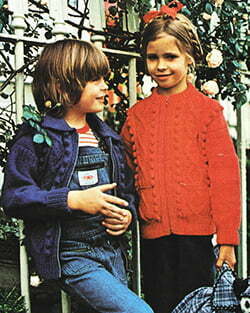 At the beginning of the decade, girls wore smock dresses, circle skirts, velour dresses and sweatshirts, and print blouses. They also wore corduroy pants with suspenders and pant sets. Denim garments including tops and bottoms in western style.

Coordinated outfits were also the popular, pleated skirts were worn with knit sweaters, cropped pants were paired with velveteen outfits and corduroy sets. Skirts were also worn with blouses and sweaters featuring bold prints and ruffles.

Prints and patterns were bold and bright, printed bottoms including high-waisted pants that were flat without pleats. These were paired with mixed print sweaters that had statement collars. they were also worn with oversize tops. Sweaters came in several styles; rib knit, fleece sweaters, and space-dyed.

Leggings were popular in the mid-80s and were typically made of lace and came with bright colors and fun patterns. These were worn with drop waist dresses and sweatshirts.

Denim wear was a hit in the 80s, worn with turtlenecks and mock vests. Acid wash denim jackets for girls came with matching bottoms with elastic waists for comfort. 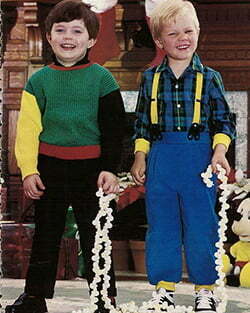 Novelty tees (t-shirts) were a hit in the 1980s fashion, a trend that continues to date. These were designed and printed with favorite themes borrowed from cinema or sports. Star Wars t-shirts were especially popular. Each boy had a t-shirt of his favorite team as team sports especially basketball and football gained a massive following on the TV. Cartoon and video game characters were also seen on boys’ t-shirts. 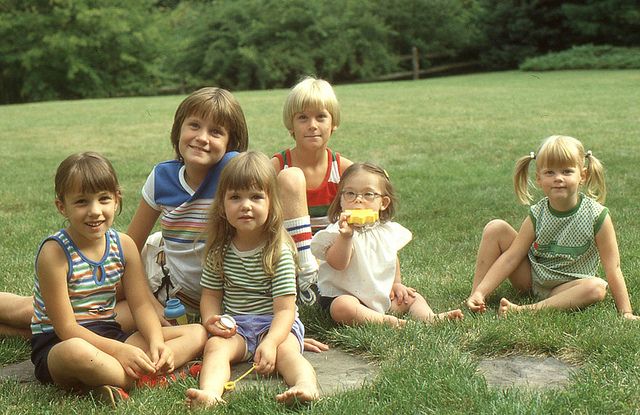 Corduroys and denim were worn with plaid shirts. They were worn as separate mixed and match items or matched suits. Denim and corduroy overalls were a hit with boys of all ages as they could be worn with a variety of tops and t-shirts. Novelty sweatsuits for boys were also popular as casual clothes or worn sportswear. Boys’ sweatsuits came with favorite cartoons and cinema characters.