To Bob or Not to Bob? That was one of the biggest beauty questions in the roaring 20s when many trendy young women went for the androgynous look that was popular then. Women were becoming freer and uninhibited which involved breaking long-held traditions including keeping long hair. Famous personalities like Irene Castle went ahead and did it anyway. But for millions of women, long hair was still sexy and hairstyling remained a serious beauty chore.

The way women applied makeup also changed in a big way in the 20s. The natural look was preferred, with subtle makeup. The silent films in emerging Hollywood showbiz played a big role in influencing makeup trends. However, women did not have much to copy from because movies were in black and white, as well as fashion magazines. Many women copied their friends or improvised for the best look. Learn more about vintage makeup and hair, create retro look. 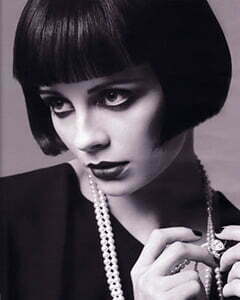 Long hair was fading away from fashion in the 20s. The big change in 20s women’s fashion saw women styling their hair to look shorter. Women who did not want to cut their hair experimented with hairstyles for long hair that could make it look shorter. Some pulled it back in a bun or chignon, which could then be hidden under a hat or turban. Long hair at the sides was laid flat against the head in curls. There was the trendy cootie garage that had hair lying flat on the ears like earmuffs.

Many women cut their hair into bobs in the 20s. The bob was perhaps the most popular among hairstyles for short hair. It went well with the La Garconne look that was trending in those years. The bob of the early 20s was made in frizzy curls and waves but gradually became even shorter and smoother as the years went. Amazingly, women preferred their hair cut at men’s barbershops than in hair salons because men’s barbers were already competent in styling short hair. 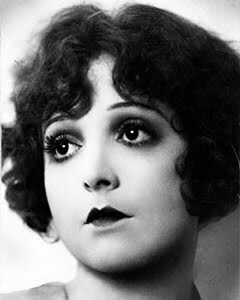 Cold cream was perhaps the most important item in a woman’s cosmetic bag. Many women aimed for the perfect complexion, which was a bit reddish on the cheeks. Foundation cream was applied before powder for moisturizing and smoothing the skin for the powder to catch better. Face powder was in limited colors; light pink also called natural or flesh, sandy-orange also called brunette, dark pink, cream, and white. Women with darker skin often had to blend different powders to get something suitable for their skins.

Eyebrows were done long and thin, which could either be curved or straight. Women who did not like to pluck very thinly used petroleum jelly to smooth the brows down. The popular ‘doe eye’ of roaring 20s fashion was done curving the brow slightly downwards towards the cheek, as seen on Clara Bow.

Few women used mascara because it was unknown. It was still new and known as a masque, eyelash darkener, or beautifier. A crude form of mascara was made using petroleum jelly and brown cream.

Eyeshadow was worn for evening events. Women did a smoky eye look, which was rounded rather than cat-eyed. 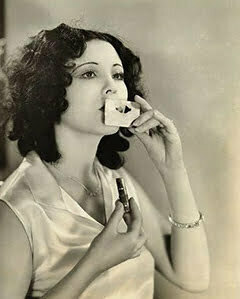 The base colors for lipstick were red, orange, and pink. This could be blended to give other hues such as rose, raspberry, poppy, and so on. Lipstick was usually matched with rouge. The most famous look was the cupid bow, which was outlining the upper lip in a heart shape.