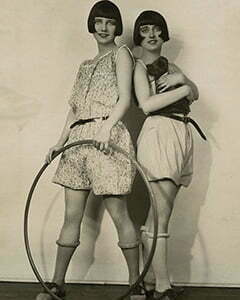 The image of the flapper was the common attire of women in the 1920s. The flapper was a term given to fashionable young women who disdained conventional dresses, behavior, and flaunted her independence in the 1920s. She discarded Victorian morals and dresses and embraced a hedonistic lifestyle, with a new sense of fashion. A fashion style that embraced short dresses, skirts, and stockings. With the aid of mass production, mail orders, and photography, the fashion style of the 1920s woman spread far.

Stockings shifted from being men’s clothing to mainly a female feature in the 1800s and in the 1920s women’s fashion world, stockings evolved from being just an article of warmth and covering, to being a fashion statement. While in the Victorian Era, a lady who exposed her legs or her ankles was viewed as immodest, in the 1920s it was a bold statement. With ladies favoring shorter skirts and dresses, stockings were a covering for legs because bare legs were not yet accepted in public and at the same time flaunted the shape of legs. Stockings were held up with a girdle or a garter. They went up the upper thigh but were often rolled just above the knees. For the flappers, rolling the stockings above the knees or even just below the knees was an act of rebellion.

Stockings came in different materials such as wool, cotton, rayon, and silk. Wool stockings were worn during winter for protection from the cold. Silk stockings were the most expensive and the best but could not be worn more than twice because of how frail the material was. The rayon was a man-made fiber that led to a revolution in the clothing market as they were comfortable, efficient to make, and easy to dye. The rayon was a convenient fabric for stockings because it stayed in shape and did not wrinkle. Cotton stockings were mostly worn as daytime clothing to work, and for the poor, that couldn’t afford rayon. 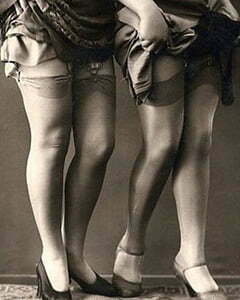 The stockings of the 1920s were made to be an exciting fashion statement. The stockings were essential clothing for partying, marathon dances, and give off a sexual appeal. While dancing, rolled down stockings helped to show a flash of skin. The flaunting of bare knees was a symbol of a free spirit in the roaring 20s fashion.

Stockings were produced in colors of black, grey, brown, navy blue, or white. By the mid-1920s, stocking also came out in nude and peach. A woman has to powder their legs to tone down the shiny nature of the stockings. Manufacturers did not make stockings in shades darker than a medium tan and there were none in matching skin tones for women of color. Stockings were worn to match the colors of dresses or other accessories such as bags, gloves, and hats. They could be plain, patterned, or embroidered. There were varieties of designs; some ladies painted Art Deco designs, Asian motifs or the face of their boyfriend’s on their stockings. Others added feathers or sequins. Embroidery was in the form of flowers, animals, and food. These designs were a roaring 20s fashion statement. Stockings were not seamless until towards the end of the decade. Stockings have come a long way from the 1920s women’s fashion world. There are new synthetic materials such as lycra and fishnets which were only worn by women of questionable reputation and naughty flappers. The 1920s flapper look would be incomplete if there are no stockings to complement the short hemlines as the fashion style was an expression of her independence.