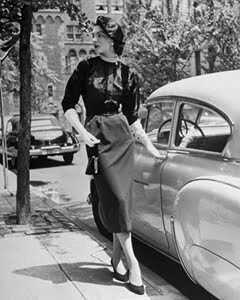 Fashion in the early 40s took different paths in America and Europe. The second world war was raging in Europe and wartime rationing was more severe than in the US. Utilitarian clothing emerged in the UK with limitations on tailoring to save on fabric the skirt of the early 40s was relatively simple and shorter, reaching to the knee level. Hemlines were limited to 2 inches, no belt loops, and no pockets. Skirt sweep was limited to 78 inches. Embellishments like frills and lace were discarded. The dominant colors became blue, green, grey, and brown.

The utilitarian skirt’s profile was a rectangular A-line with a hemline that was slightly wider than the waistline. The skirt was designed for practicality; easy to move in, comfortable to wear the whole day long. Plaid skirts were popular in tan, brown, and green or yellow and red in warmer weather.

Pleating in skirts became more widespread after the war. Tailors experimented with different pleating to add volume at the hemline while keeping the skirt smooth and flat on the hips. More volume on the hemline added a bit of swing as a woman walked. Brighter colors were like red, blue, yellow, aqua, and lime green could be seen on more skirts. 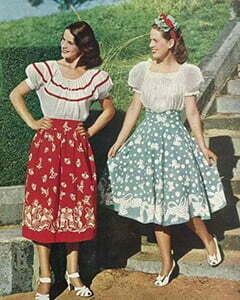 Fabric rationing in the US was not as severe as in Europe. The prairie skirt style trend had been triggered by the movie ‘Gone with the Wind’ in 1939. This was a loose skirt that was embellished with deep ruffles (deep flounces) and lace trimming. It was made from calico, denim, or garb dine. More colorful styles came from US clothing companies that were allowed to import from Mexico. The imported skirts had bright colors, lace edging, and embroidery common in Mexican folk wear. The waistline was gathered to add more volume at the hips while the hemline was flared. Later designs of the peasant skirts featured American folk art with natural decorations like fruits and flowers.

This peasant style skirt continued to be popular even after the war. It was liked for its practicality, comfort and because it could be worn with a variety of blouses and tops. 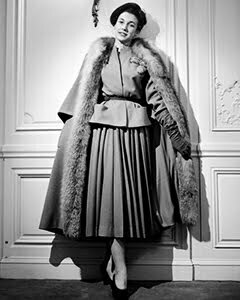 The end of the war and lifting of fabric rationing gave designers a freer hand in new designs for 40s women’s fashion. Women were also looking for more luxurious designs after the bad war years. The ‘new look’ by Christian Dior was the epitome of luxury with its voluminous skirts. The A-shape was exaggerated with very wide hemlines that reached mid-calf. This skirt had large patch pockets and pleats to make the hips fuller. The waist was narrow with a wide waistband to cinch in the waist for a waspish feminine figure. Wide belts without buckles were worn over the skirt’s waistband to make the waist even narrower.

The new look was frowned on by some women who found the design wasteful and exaggerated. A skirt could use up to 15 yards of fabric. Some of the more elaborate designs were also heavy and uncomfortable to wear for a long time. But the look became popular with young ladies who wanted to break from the dour utility fashions. 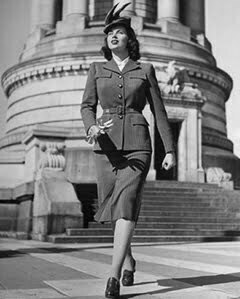 Some women, especially in the upper class, did not like the voluminous skirts of the new look. A slimmer skirt was preferred to be worn in a skirt suit set. This skirt dropped in a straighter line to the hemline to make a conical shape. They reached slightly below the knee and the hemline tapered in slightly. This design came to be popularly known as the pencil skirt.

Some narrower designs had vents at the back or the sides to allow freer movement. A kick pleat was also seen on more modest designs because pleats exposed less skin. More expensive designs used stretchy synthetics like rayon. Trendy ladies wore pencil skirts with hosiery and pump shoes. 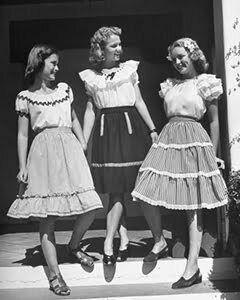 This was a restyling of the peasant skirt, with tiers dropping towards the hemline. It had gypsy inspirations. This design was popular for teenage girls.

The 40s ended with the new look design on a high note. The opulent and glamorous look of the design announced to the world that there was a renewed success. This design continued to be trendy into the next decade.