One may think the 1930s would have little or nothing to offer to the fashion world due to the Great Depression that badly affected the then economy. That’s what was supposed to be. In reality, however, the fashion world did not quit, instead, the decade’s fashion made the century a bit colorful with extremely unique clothing, that embodied femininity.

The major influence of the 1930s fashion was Hollywood. Most people of the decade became glued to their TV screens just to get the latest elegant style they could afford. The Hollywood stars who were aware they were being looked up to, stepped up their fashion game and brought to the scenes the most glamorous styles of the decade. Stars like Bette Davis, Greta Garbo and Marlene Dietrich became style disseminators to fashionable women.

The 1930s fashion styles presented a change to the rather uncommon trend of the 1920s which was characterized by the boyish looks. Hence, the coming back of femininity in the 1930s couldn’t be unnoticeable. Let’s get to see some features that distinguished the 1930s style from that of other decades. 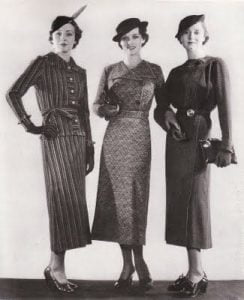 The everyday wears were more practical due to the economic depression that had ravaged the decade.  The suits women wore in the 1930s were more tailored than before, with durability as a priority. Prints and patterns also distinguished the daywear of these years as more abstract but beautiful designs were frequently used; animal prints being some of such. Other prints such as polka dots and floral patterns also emphasized the femininity that came alongside the decade. 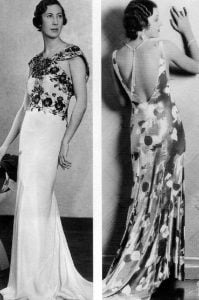 Evening wears, on the other hand, were more stunning as body hugs were the new order of formal events. Slender looks became the most popular evening look and floor-length gowns were the true definition of evening dresses in the decade. The body tight silhouette alongside the usually flared bottom of these formal dresses added more glamour to them.  Also, these dresses seldom lacked amazing embroidery done with either bead, florals, rhinestones, and even ruffles. Low backs and sleeveless were also featured in the 1930s evening dresses. In all, modesty was topnotch. 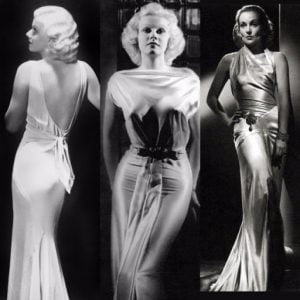 The bias cut was one of the unique innovations of the century. To get the bias cut, the designer just had to cut the fabric 45 degrees against the weave. It was used for all kinds of 1930 fashion clothing. It became the women’s favorite because it created an effect that stretched the fabric, while it clung to the body of the wearer. Its introduction was attributed mainly to Madeline Vionnet and though it was quite an expensive technique, the bias cut became one of the most popular dress styles used by various designers of the century. On those lovely evening gowns, the cut gave gentle curves around the waist and was beautiful with flared skirts. 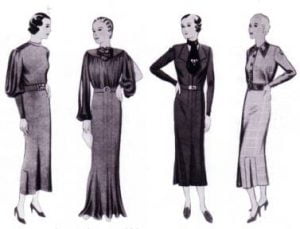 The fashionable decade aimed at emphasizing the feminine figure concentrated on different parts of dresses which helped to bring out the natural body outline. Hence, waistlines had to change. The waist of dresses was then made to enhance the woman’s figure. In other words, the waist of dresses was made to be exactly like the natural female waist. The 1930s women fashion also paid attention to the shoulders of dresses. Wider shoulders were a norm and exaggerated shoulders became the new style for dresses. Designers achieved the exaggerated shoulders with multiple layers of fabric which made the shoulders appear very full. These beautifully made shoulders were seen on both daytime suits and evening dresses. 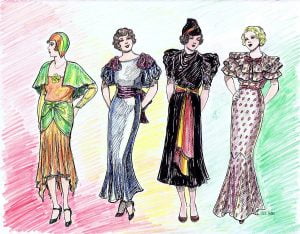 Another unique fashionable innovation of the 1930s initiated by Elsa Schiaparelli was the adornment of dresses using drawings. Elsa had worked hand in hand with amazing artists such as Jean Cocteau and Salvador Dali and so, while they did the drawing Elsa adorned the clothes she made with the drawings. With her nicely structured designs, she earned her fame as one of the most popular and mind-blowing designers. One of her works that stood out was that with a woman’s head whose hair made of sequins dropped on one arm. Her dresses also followed the trend of firmly held waistlines and exaggerated shoulders. 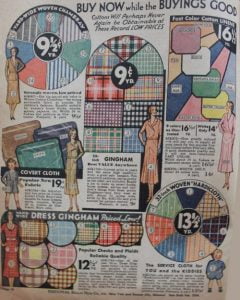 New fabrics also sprung up in the decade. Due to the economic depression of the 1930s, heavy and expensive fabrics like silk had become very rare. Hence, more affordable and lighter fabrics such as rayon and nylon had to be produced. The lighter fabrics also allowed for more prints and dye. They were very easy to put on and wash. They also kept the body warm while the women remained elegant.

Although the 1930s was a decade of severe economic depression, it certainly did not affect fashion as one would have thought it would. Women remained fashionable in their dressing and designers remained innovative. The 1930s women fashion has become the model for recent styles. So, you can go ahead to update your wardrobe with your favorite 1930s fashion clothing.