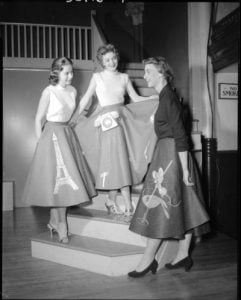 has to be the poodle skirt of the 50s.

Like everything in fashion, the poodle skirt has its history and role that played in fashion history.

After the Second World War, the world had come back from the scarcity of clothing rationing,  so there was a need for a refreshing of people’s looks, which made Christian Dior’s New Look collection gain so much attention from the public.

Dior’s intention with the New Look style was to remind ladies of their favorite styles before the war. His styles were glamorous as usual, laying emphasis on the feminine silhouette with full and narrow skirts tightened waists, and round shoulders.

In the same year when Christian Dior’s New Look fashion collection was released, 1947, the poodle skirt, also came into the existence but with less public attention.

The designer of the Poodle skirt, Julie Lynn Charlot, was an opera singer and actress who didn’t have much money during the holiday season and wanted to look good. She had recently gotten married and was without much money as her husband Mr. Charlot lost his job. In spite of the situation, Julie knew that she had to create something for herself. She had limited knowledge of sewing as an actress, but she found a solution. She acquired some inspiration from her mother’s factory and decided to create her own version of the full skirts which were trending at the time. 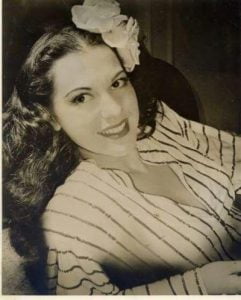 At first, her designs were Christmas-themed. She made her first type of skirt and people loved it. The next ones she made, she had them sent to a store to be sold and due to the success of the sales, and the store demanded more of the skirts but with less of the seasonal designs. The poodle skirt soon became a trendy skirt beyond the holiday season.

Creation of the name ‘Poodle’ 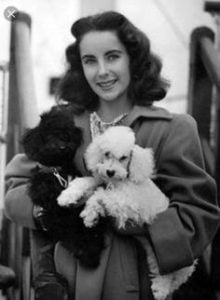 The history of the ‘poodle’ name is synonymous with many other names in fashion item history. It was named due to a trending scenario at the time.

The Poodle dog, in 1948 was the winner of the 1st Westminster dog show and had been synonymous to a high-end female owner. The world soon adopted this and went on a dog craze. Movies were known to highlight wealthy females with the poodle dog and ads had the dog photographed with glamorous ladies.

It was during this craze that the store where Julie sold her skirts requested that she provide the skirt in other designs, specifically the poodle design, and that’s how she adopted the name and fashion has never looked back. 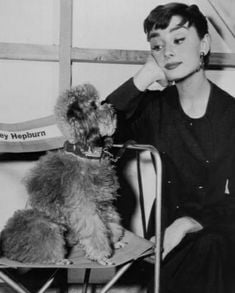 The Popularity of the Poodle Skirt

Right after her poodle design, the poodle skirt gained mass popularity. For several years after that, it became a fashion for women and teenage girls alike. Julie Lynn created her brand and eventually added tops to her brand.

She did not own the right to the poodle skirt and even while she continued producing them, she partnered with companies who

helped create patterns that could be taught to girls and women around the world.

These DIY trends lead to a lot of innovation among young girls and women. Teenage girls attached trendy designs like disc records, catchy phrases, and others. Older ladies and women had flowers, the Eiffel Tower and on some ladies like Bettie, Morrie had board games sewn on their skirts. 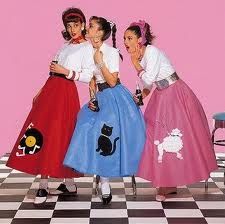 Following the creation of the poodle skirt and its fun style, the world was able to go back to a fashionable time like it was during the pre-war era. They currently come in a variety of designs and patterns. After the 60s, female fashion took a new direction and poodle skirts were no longer the common day wear.

The post-war era of the 1950s was all about getting people to the free-spirited pattern of the pre-war era. This was inspired by Christian Dior for his New Look collection and also led to the creation of the fun style of Poodle skirt by Julia Lynn.

Some other popular trends in the 50s were：

Tea-length/swing dresses: Most day dresses and casual wear were swinging dresses and skirts. The tea-length design was so particular that most wedding dresses in the 50s adopted the design. Petticoats were often worn to give fuller impressions under these circle skirts. 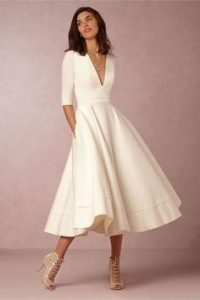 Peterpan collar dresses: An adoption from children’s fashion, peter pan collars were popular on women’s blouses and dresses. They added a form of playfulness to the existing fun styles of the 50s. 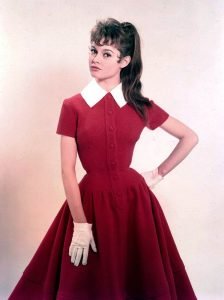 Pencil skirts and dresses: Pencil skirts also became popular at that time. They were usually of high waist and went as low as the tea length, sometimes longer or shorter. They laid emphasis on the feminine silhouette and were sophisticated enough for working-class ladies at the time. 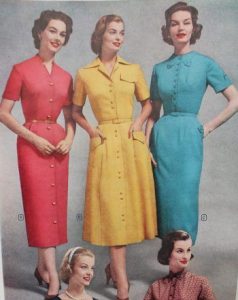 END_OF_DOCUMENT_TOKEN_TO_BE_REPLACED

Wedding Guest Outfits Ideas: Dress to Wear to a Wedding