WHAT MADE MARILYN MONROE FAMOUS?

Marilyn Monroe’s style earned its place in history, it was effortless and stunning. Marilyn Monroe’s dresses consisted of sleeveless gowns and curve-hugging wiggle dresses. She stole scenes in movies with her sequined gowns and designer duds while lighting up red carpets with her silk evening gowns and white fur stoles.

Monroe was one of the most marketable Hollywood stars by 1953, her boldness, dreamy curves and dangerous sex appeal earned her a huge spot in the limelight of Hollywood cinema.

Her incredible iconic outfits also contributed to her relevance on screen. She worked with designers who designed dresses with high-quality materials and magnificent colors that helped keep her in the spotlight and contributed to her rising fame and stardom. 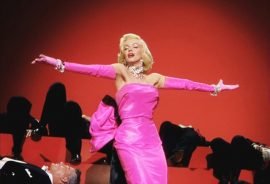 Marilyn Monroe wore this dress while acting as the character Lorelei in the movie “Gentlemen prefer blondes”.  It was a hot pink, strapless satin dress with matching opera-length gloves and an enormous knot at the waist. Accessorized in head-to-toe diamonds, Marilyn gave a rendition of the song “Diamonds are a girl’s best friend”.

The dress was designed by William Trevilla, who worked with the actress several times. It was designed at the last minute as a replacement to the originally intended costume, which was a lingerie outfit covered in precious stones.

The pink dress was chosen as an effort of damage control after nude pictures the actress had taken before answering the call of fame were released. The director of the movie opted for a less revealing outfit, to distance the actress from the scandal.

Over the years the pink dress has become an icon of film and fashion. The dress has often been imitated and parodied by other Hollywood celebrities, for example, by Madonna in her 1985 video for her hit song Material girl.

The pink dress later emerged at “Profile in History”, the Calabasas based auction house on June 11th, 2010. The gown’s estimated auction price was placed between $150,000 and $250,000 but was ultimately sold for $370,000. The pink dress was referred to as “the most important film costume to ever come to auction”. 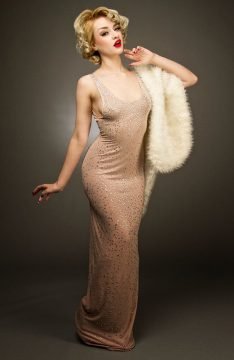 Marilyn Monroe’s birthday dress was a marquisette dress, custom-made by renowned French designer Jean Louis. It was based on a sketch by legendary American Fashion designer Bob Mackie and inspired by stage costumes Louis created for Marlene Dietrich and her Las Vegas cabaret act.

Marilyn Monroe wore the dress to perform the “Happy Birthday Song” for John F Kennedy, the then president of America at the third Madison Square Garden. The dress was made of sheer Marquette fabric, with 2,500 shimmering rhinestones sewn into it. The dress was so tight-fitting that Monroe was unable to wear anything underneath and had to be sewn into it by the designer.

The actress paid $1,440 for the dress equivalent to $12,000 in today’s figure. In 1999, it sold for over a million dollars at Christie’s as part of the Landmark Marilyn Monroe Estate sale, then in 2006, the dress set a new record price for any dress sold at an auction, after selling at Jullien’s Auction for the mind-blowing price of 4.8 million dollars. The dress was acquired by Ripley’s Believe it or not Museum where it resides till today. 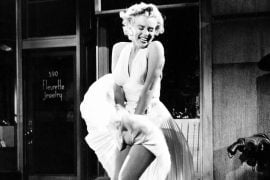 Monroe wore the dress while shooting a scene for the movie “The seven-year Itch”. The dress is a light-colored ivory cockatiel dress designed by William Travilla, it was made up of a halter-like bodice and a plunging neckline. The dress was made up of two soft pleated fabrics that joined at the neck, leaving the wearer’s arms and shoulders bare.

Perched on White Sandal heels, Monroe let the air from the metro lightly elegantly blow her skirt. This act gave birth to one of the most iconic moments in Hollywood cinema history. 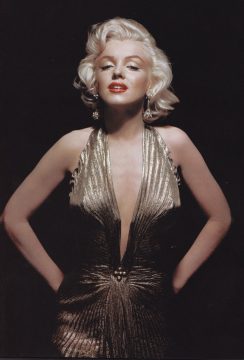 William Travilla designed another mind-blowing dress for the movies Gentlemen prefer blondes. The gold lamé dress was made to compliment the curves of the famous actress; it had a ravaging neckline and was stitched unto Monroe’s body allowing it to perfectly drape her curves.

Monroe showed the mass public that she doesn’t just shine in luxurious dresses but also in the most ordinary of dresses. Monroe wore the light purple sweater paired with black skin tights while singing the song; my heart belongs to daddy in the 1960 movie, Let’s Make love.

But we guess the stunning actress had to take a break from all the glitz and glamour, as she went to bed in only Channel No 5. Yes, you read that right Marilyn Monroe’s pajamas’ was nothing other than a few drops of the expensive Channel perfume.

1950s Plus-size Glam: Retro Formal Dresses
What to wear to the 1950s Prom
Halloween Stores and Spirit Near Me: Funny Adult Vintage Halloween Costumes
Types of Petticoat Guide-How do I Make my Dress look Fluffy?
1980s Plus Size Fashion Guide: Freshen Up Your Wardrobe
What Hat to Wear with an Audrey Hepburn Dress?
8 Dress Tips For Brighten Your Vintage 1960s Style
1950s Bathing Suits vs Swimsuits for Women: Which One Looks Good on Hourglass?
Inspirational Fashion - How to Reinvent the Dress Like the Great Gatsby?
Tags:
1950s Dresses, Vintage Style Dresses
Facebook Twitter Pinterest linkedin Telegram
Newer TRIED A 1950S HOUSEWIFE SCHEDULE: HOW TO BE A 1950S WIFE
Back to list
Older Bathing Suit Trends For 1920s – Swimwear Styles

END_OF_DOCUMENT_TOKEN_TO_BE_REPLACED

Facebook Twitter Pinterest linkedin Telegram
A pin-up model is regarded as a pin-up girl for a female and a male pin-up for a male is a model...