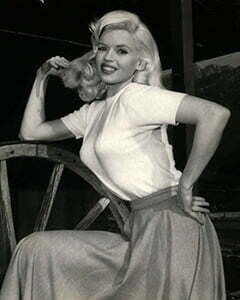 The 50s were generally a good time for many people; there was more money in the pockets and hope was in plenty. Women were freer to experiment with fashion, and this decade was full of elegant and sophisticated trends. The Paris fashion scene was back with new and exciting designs. Christian Dior had taken the fashion world by storm with his ‘New Look’ Hollywood stars such as Joan Mansfield were also a big influence on women’s fashion and were closely watched for trends and fads. The 50s saw the biggest variety in dress and skirt designs; circle skirts, poodle skirts, sheath skirts, mermaid skirts, wiggle dress, victory swing, and the Mansfield dress. Women had plenty of choices to show off newfound success, class, and sophistication in beautiful party dresses and accessories.

Women were looking for a change after the muted fashion of the 40s and Dior’s ‘new look’ was a big hit when it came out. The silhouette was soft and feminine, with a waspish waist and full skirts. The hemline dropped to the mid-calf in a billowy fashion. Dior’s design was extravagant and borrowed from the Victorian era minus the layered garments. The skirt was made from 2-3 yards of fabric which was considered an over-the-limit extravagance. The thin waist profile achieved by wearing corsets was also controversial as corsets had gone out of fashion at the beginning of the century. But young women willing to experiment liked the look and it became a fashion wave of party dresses for women.

The new-look design could be worn as separates; a blouse and skirt, or as a full dress. The dress would have one of the popular skirt designs with an attached bodice. The 50s tended towards the elegant and formal. 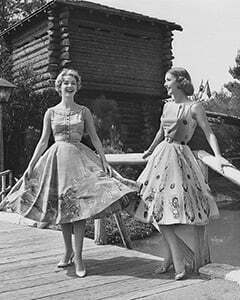 The ‘victory swing’ came from the way that the skirt swayed when a woman walked. The evening dress could come with capped short sleeves puffy at the upper arm. Some designs were sleeveless. The neckline was a shallow V-shape for modesty purposes. The bust was close and well-defined dropping down to a narrow waist. The waist was high and narrow with a cinching waistband that extended from the waistline to below the bust. This was the alternative to wearing a corset. The skirt was full and dropped to the mid-calf in an A-shape. The hemline was loose and billowy which made the skirt sway as the wearer danced to the jump swing or Boogie Woogie.

The swing dress’ full skirt was perfect for all ladies. Those with slim profiles looked fuller in it, and those with curvier profiles found it complimenting. 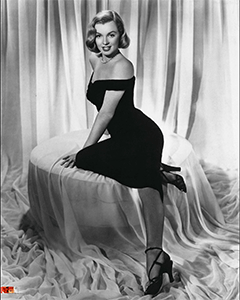 The wiggle dress was a contrast to the swing skirt. It had a slim conical skirt that ended in a narrow bottom that made the wearer walk with a wiggle.  This dress was popular for more formal cocktail parties like the Oscars or office parties. It also had a tight-fitting bodice with a sharp bustline and narrow waist. Some designs featured a wide bottom, ala the ‘mermaid skirt’ to allow the wearer freer movement when dancing.

The Mansfield dress was popularized by Hollywood stars Joan Mansfield and Liz Taylor. These two were widely loved for their trends in 1950s women’s fashion. The dress featured an open ruffled collar in a V-decollate that left much of the back bare and showing a bit of cleavage in the front. The bodice dropped into a narrow waist then hugged the hips and thighs closely, bringing out the natural curves very well. This dress was a big hit party dress for attending cocktail events in high society. It oozed class and elegance when accessorized with a string of pearls. 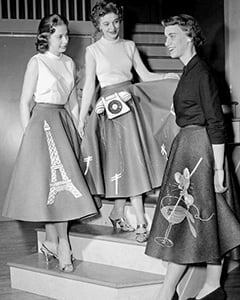 This is one of the most popular 50s style dresses. The poodle skirt was a full skirt that featured fun decorations popular with teenage and college girls. Poodle dresses had this kind of skirt usually with contrasting color tops. Decorating designs were at the lower part of the skirts close to the hemline. A leashed poodle was the most popular. Other designs included telephones, the Eiffel Tower, the Kremlin, mickey mouse, and other popular icons. Some had cheeky messages. This was the perfect dress for attending house parties and college sorority parties for young ladies.

How to Dress Vintage at Work
1950s Hairstyle Trends for Summer & Individual Make up Instructions
1960's Vogue Sewing Patterns for Wedding Dress
1940s Party New Look Influenced by Hollywood Designers
1920s Wedding Dresses - Picks for Flapper Girls
Women Hairstyles Changing in the 1920s-Back to 100 Years Ago
1980s Plus Size Fashion Guide: Freshen Up Your Wardrobe
1930s Inspired Dresses - 5 Plus Size Fashion Choices for Party
How to Dress Like a 1920s Flapper
1950s Dress with Petticoat (Why do Many People Like to Wear this Way?)