1960s women’s fashion was perhaps the most exciting thing in a century. The fashion scene saw big trends; the conservative elegance of Jackie Kennedy to the scandalous mini to the peasant styles of the hippies. After the conservatism of the 50s, women were beginning to let loose and experiment with more styles. The slim elegance of the sheath suit was still strong in the early 50s, especially among older women. British music and fashion scene were taking over with the modern or ‘mod’ movement that eventually gave the world the mini. The mini skirt and mini dress are an enduring legacy from the 60s as trendy today as it was back then. The swinging 60s holds plenty of memories for many fashionistas.

The classy elegance of the 50s rolled over in the early 60s in the form of expensive fashion designers‘ dresses. The US first lady was the perfect picture of this look. She wowed many women with her fashion sense that was both simple and classy. Everything she wore became an instant hit. Her preference was matching dress and jacket suits from Givenchy.

Her casual look often had her in knee-length A-shape dresses accessorized with an expensive necklace, gloves, and occasionally a hat. Women adopted this look for formal events as well as evening wear to classy balls and cocktail parties. 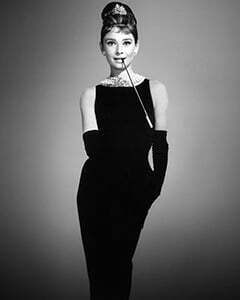 The ‘little black dress’ namely Audrey Hepburn dress was popularized by actress Audrey Hepburn in her 1961 movie Breakfast at Tiffany’s. It was also an A-shape dress from Givenchy and became copied by thousands of her fans who wanted the designer dress style.

Many women preferred the short cocktail dress in black, silver, or metallic gold. The strapless cocktail dress was popular as was the one-shoulder gown. The long profile empire dress with its straight column dress also remained popular for formal evening events. 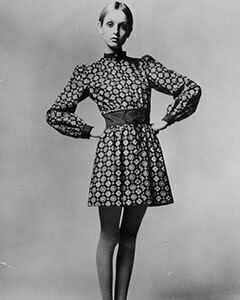 The modernist ‘mod’ wave was taking over in the UK in the 60s with an air of liberation. They wore dresses above the knee, prints were in psychedelic bright and loud colors, and hair was kept in short bobs. The mod look was popularized by British actress Twiggy with her short dresses in go-go boots.

The mini skirt and mini dress were perhaps the most ‘scandalous’ thing to have happened in women’s fashion in the 20th century. Mary Quaint took the short above knee dress that was popular with young British ladies and made even shorter. Her design hung 6-7 inches above the knee. She was making custom designs in her London boutique in 1965. She called the design the mini after the diminutive British car that was popular around the world. 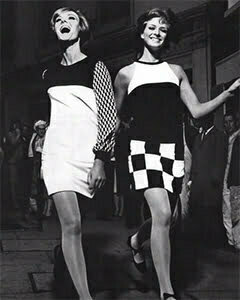 Mary Quant’s 1965 fall fashion release was dubbed the ‘youthquake’ introduced the mini to the wider fashion world. The mini had even fellow designers wondering whether to love or hate it.  Coco Chanel hated it while New York designer Betsey Johnson loved it. Some restyled the design. But the mini became a hit with young women around the world. Actress Twiggy wore it with white go-go boots, a look that was copied by millions of young fans around the world. By the end of the 60s, the minidress had become extremely short, just barely covering the bum.

The mini was adopted into the Space Age style and restyled in PVC with a variety of usual colors, the favorite being leather black. Many ladies favored contrasting it with white boots or flat canvas shoes. The mini was the perfect party dress for the rock parties of the 60s. It was uninhibited and expressed confidence. It was the perfect statement of the wearer’s sense of feminine liberation that was taking root in the 60s. 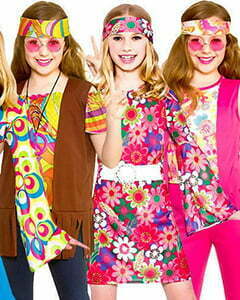 The hippie style movement of the late 60s came with a distinct dressing mode that was care-free and simple almost looking shaggy. This peasant style borrowed heavily from oriental clothing. There were caftans, saris, and yoga pants. Dresses were loose and flowing mainly made of cotton and linen. The hippie’s slogan ‘if it feels good, do it’ translated to a loose fashion sense even for women. Any dress was a party dress, and lots of hippy parties were happening in the 60s.