You are here: Home / 1980s Women's Clothing / 1980s Back To School Hairstyles Popular To Today

If you thought that the previous decades were goofy on the hairstyles, you’re in for a treat. The 1980s hairstyles overrode all the wackiness that former hairstyles had achieved; let us now talk about going outrageously crazy!

The hairdos in the 1980s got a lot more interesting, large, and downright wild. The way to unconventionality that was paved back in the 50s finally reached to a kooky destination in the 1980s, and people still fondly reminisce that time in terms of its ingenious hairstyles and the use of lots of hairsprays.

The 1980s-inspired hairstyles for long hair were quite a sight to see. Have a look: 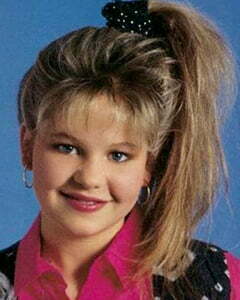 The 1980s spelled hairstyles as large and big. Women religiously believed in the idea of “the bigger the better” for their hairdos, because apparently, the voluminous look of the bombshell hairstyle from the previous decade was an instant hit.

The bouncy prom involves the half-up and half-down tactic with the added expansion to the overall volume. Collect the front hair through the top ear and gather it into a half, high and mighty ponytail while back-combing slightly to bring the front swell. The scrunchie on the crown is preferable, with the loose hair rolled up in thick, soft waves. Put on hairspray to keep up the puffed front look fixed, and initially blow-dry your hair for the voluminous look.

This hairstyle was and is, wearable on lots of occasions, including prom dance, a tennis match, cheerleading, and for a nice day out in college. 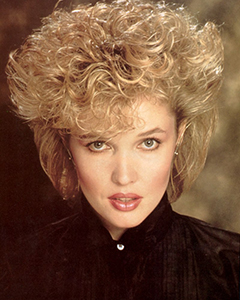 To get into the crazy 80s spirit, you would need a few hours to get your hair on the ludicrous track. For a costume party, this hairstyle is worth the time and effort because it animatedly implies: the curlier the better, the higher, and the wider.

If you have naturally wavy hair, you would not need to bring the artificial curves to the mane that should fall loose on the shoulders. All you have to do is collect a thick amount of hair from the front and back-comb it thoroughly to suspend it higher on your crown. Tease it until it stays up, and put on lots of hair gel and hair spray to help you out. This “blasted” and subtly permed look is a silent indication of the crazy 1980s. 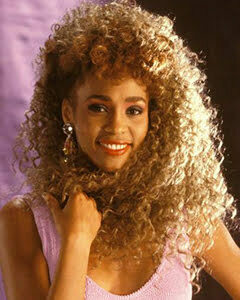 Puffed out and spiraling into the sky, the curls of Whitney were one of the famous highlights of the 1980s. This hairstyle will require lots of perming, gel, and hairspray, so you need to be well aware of the potential circumstances. However, rest assured that once this look of tightly permed hair and crimped bangs is pulled off, it will look downright glamorous and alluring, to say the least. This is quintessentially the voluminous, 1980s vintage look defined extraordinarily! 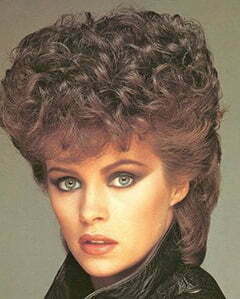 Wacky with an explosion on the head, the Mullet is another androgynous hairstyle that although stepped in the 1970s, took 15 years to take off. It enjoys the bizarre mix of explosive, spiked hair with sleek perfection, and is your go-to vintage hairstyle if you plan to take the stage by storm. 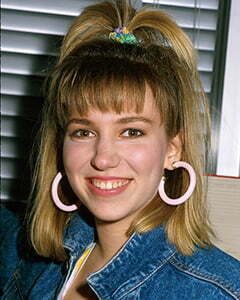 Yes, it sprouts like a whale on the top of your head and tapers down into a ponytail. The side high tail and the whale sprout were the Do-It-Yourself hit of the 1980s fashion and particular favorites of young girls and high-schoolers. With straight combed bangs, tie a high ponytail with a big scrunchie either at the middle or slightly to the side to bring out the classic, upright look.

The advent of hair products saw a hefty rise in erratic hairstyles that banked on idiosyncrasy and marked the 80s with words like “big,” “bold” and “bizarre.”