The summer season of the 1930s, as always, was a season that required special clothing to suit the weather. Comfort was a priority during summer. Although money was hard to come by due to the economic depression during the decade, the ever-fashionable 1930s women surely had the right dresses for the season. Since the decade had changed the masculine looks of the 1920s, the summer dresses for women during the period of the 1930s were ultra-feminine. Also, it was an era of Hollywood glamor hence, the decade’s women had their summer dress inspiration from the Hollywood stars.You may be interested in hollywood style.

The 1930s summer dresses for women were however versatile. The same styles of dresses could be worn during the day, at work, to dinner, to an informal event and wherever. This was because dresses were made to suit the society’s economy. So, unlike other decades that had different styles for different occasions, the 1930s had just some regular ones that could work for every time and everywhere.

A new trend in the era’s feminine fashion styles for summer dresses was usually spotted by a change in parts of dresses. And of course, the Hollywood celebrities helped to spread whatever new trend there was, as their wearing it was like approval for the trend. Summer dresses of the 1930s had lots of styles that still influence today’s fashion. Here’s some of the trendiest. 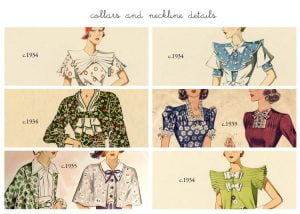 Modest and very high necklines that revealed very little or no cleavages were the permanent features of every 1930s summer women dresses. The most regular necklines were the V-neck, boat neck, and square neck styles. Deeper necklines were also used but had to be made with a false inner so it appears as a two-layered neck style. Collars were also frequently used to emphasize necklines. The mandarin collars and folded collars were the most commonly used. They usually had beautiful embroidery or flowers attached to them. 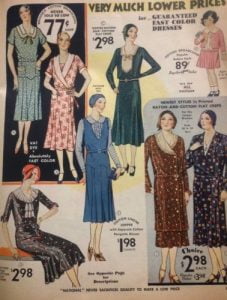 the 1930s summer dresses for women had made the most efforts in making the waist of dresses as slim as they could be. Although the decade had begun with the 1920s low and loose waist style, it wasn’t long before the 30s waist style became a popular trend. They were made to look like the natural waist hence they were usually high and slim. Matching belts were worn to emphasize the slimness of the waist. Waist seams had also changed. The half-moon or upside-down v-shaped seams were used under the bust to flatten and shrink the waist. 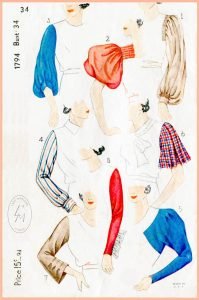 The early 30s summer dresses had begun with long and slim sleeves. But as time went on, short puffy sleeves became the new sleeve style while wider shoulders were the then preferable style. Sleeves had to be made to accommodate wide shoulders. So, the puffy sleeves were done with enough gathers at the shoulders. Other summer dress sleeve styles of the era were butterfly sleeves, cape sleeves, flare sleeves, pleated sleeves and others. The yoke seam which was done with gathers was also used to widen the shoulders. 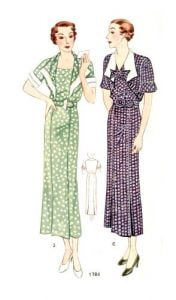 Another amazing summer dress style of the 30s was the tunic. It was identified by a long tunic length placed over a skirt or belted over a simple sheath dress. The peplum which looked like a two-piece style also trended. It consisted of a peplum blouse and an attached overskirt. These became the most popular evening dress styles. They were simple and classic. 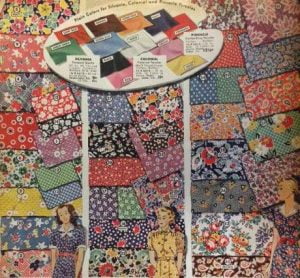 The economy of the 1930s had affected greatly the use of expensive fabrics like silk and wool. Nevertheless, new and beautiful fabrics evolved. One of such was the rayon fabric. It was cheap and comfortable to wear. Crepes became another popular fabric during summer. The materials sometimes had amazing prints such as polka dots, stripes and florals on them. 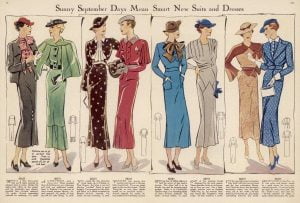 The 1930s had created lots of details especially at the top of dresses and they made them look so interesting and alluring. Some of the decorative details on the summer women dresses included lace, applique, flowers, trapunto, fagoting, studs, decorative pins and a lot more. While these embroideries were placed mostly on the bodice, shoulders, or sleeves of the dresses, zippers, which were new then, were used at the back. While the skirts had mostly pleats on them.

The 1930s summer dresses for women had amazing fashion trends that made every woman appear classic despite the economic depression during the era. These styles are still very much in use today, although with slight modifications to suit the wearer.