What Style Of Ball Gown Dresses Did 1940’s Women Like? 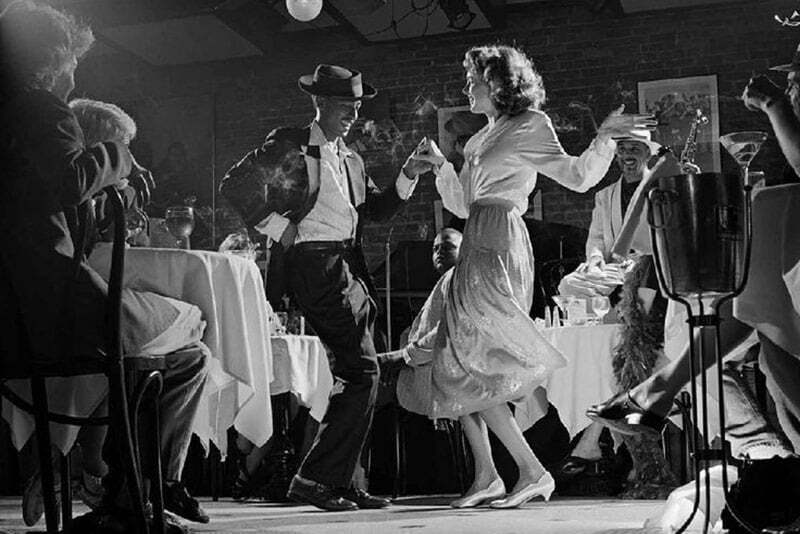 The start of the 40s was disruptive to high fashion as people’s attentions were turned elsewhere. Women contributed to the war effort by working in uniform and food factories for troops at war. The Paris fashion scene went underground as fashion designers were exiled or shut down except for a few. Austerity measures were also put in place affecting fabric use which limited what designers could do. Good times did not happen often and when they did, women wore what they could find from the previous decade.

The Hollywood scene was a big fashion influence on 40s women’s fashion. The 1939 film Gone with The Wind depicted a happier time when women wore gowns with tight-fitting bodices, with large full skirts. But women were not big on wearing corsets or layered clothing, which led to a simpler design. This gown was simple yet regal. It was fit for a classy ball or showbiz event.

The long and sleek gown of the 30s was still trendy as an evening dress. It was designed to ride the curves using the bias cut that had emerged in the 30s. The sleeveless gown gave a statuesque profile like a Greek goddess. It had a columnar shaped skirt falling long and straight to the floor. The skirt was less full than that of the princess gown. Some designs had subdued embellishment in the form of beadwork or sequins at the neckline. This design was restyled in the early 40s and made from rayon or layered chiffon. Favorite colors were black, pink, blue, and red hues.

The long evening gown was popularly worn with a dinner jacket especially in colder weather. Short jackets that barely reached the waistline were preferred. The jacket would have slightly padded shoulders for a wider look. Bolero jackets with rounded edges at the front were also worn with long gowns. They would reach slightly below the bustline, with one or two bead or 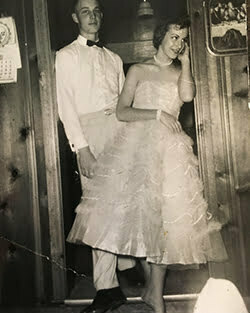 The princess gown was one of the most popular evening ball gown dresses of the 40s. it had a shortened A-line full skirt. The skirt was made fuller by wearing petticoats or layering in tulle. Later designs used hoop skirts or multiple petticoats.

The princess gown was a hit because of its subdued seduction. It showed more skin on the neck, shoulders, and chest. Bolder designs had low backs that could be worn with strapless bras. Drop sleeves were popular before the strapless gown. The sleeves were full and puffed in the upper arm. The princess gown was especially popular as a prom dress and dances for young people. This gown was also a popular wedding dress. 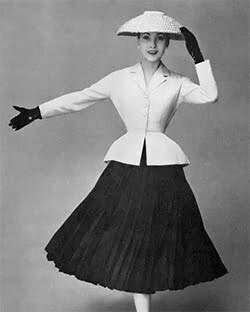 French designer’s Christian Dior’s 1947 collection introduced the ‘new look.’ It was a restyling of the pre-war designs with more accentuated curves. The shoulders were wide, dropping to a narrow waist and then flaring out in an A-style skirt much like a Victorian gown. The most popular style of the new look was the ‘Bar Suit’ which had a full black skirt with a white jacket.

Some of the older women were not enthusiastic about wearing the corsets needed for the cinched waist of the new look. But younger women liked its fresh look as an alternative over the straight long gowns of the early 40s style dresses.

The new-look was opulent, using up to 15 yards of fabric for making the skirt. Some considered it decadent but most women liked it, to forget the years of deprivation. The look was feminine the romantic, a contrast to the dour looks of the utility clothing that was commonly worn in the 40s. This look remained popular until the end of the decade. 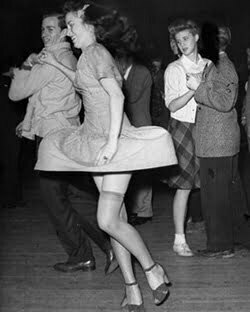 Many women could not afford the long expensive gown and chose to wear a shorter cocktail dress. This was more practical because it could be worn for day events for both formal and semi-formal occasions. It was also classy and sophisticated if one wanted to go out later in the evening.

This dress was shorter, reaching slightly below the knee. It had thin straps with short sleeves. Some designers used shirring in the waist. The bust’s profile was enhanced using panels on one side and cross-wrapping across the bust. A high cut-in neckline maintained the modesty required of the time. The skirt’s style was gathered or wrapped. This dress could be worn with medium peep-toes for a quiet dinner, or ankle strap sandals for a night of dancing.