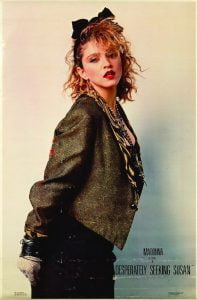 The 1980s hairstyles have left a mark in time. It had to make a statement or you weren’t wearing it. These were the years of perms and parabens in different shapes, styles, and colors.

Whether it was a messy hairdo like Cyndi Lauder, all curls and freestyles like Janet Jackson, the ‘80s ladies always placed a large amount of energy in getting their hair looking just right.

With AquaNet hairspray to give the hair an extra boost, a Conair crimping iron, Banana clips, and the infamous L’Oreal beauty line, the ‘80s ladies had fun creating those Mohawks, flattops, waves, curls, cuts, and whatever it took to make their hair catchy.

And just like the hair, makeup had to be twice as eye-catching. From the brighter shades of foundation to the grown out bushy brows; defined mildly with brow powder, to the raccoon style eyeliners and loud colored eyelids in red, green, or pink, and finally the lips in deep red or sassy pink or even a fiery orange. The ‘80s lady came through with all colors, ready to reel you in. 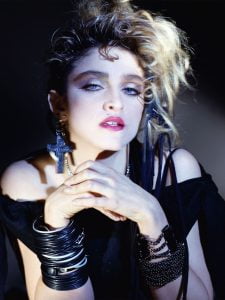 Born Madonna Louise Veronica Ciccone on the 15th August 1958 in Bay City, Michigan to parents Silvio ‘Tony’ Ciccone and Madonna Fortine, Madonna was the third of six children. She was given a conventional Catholic upbringing at a young age but had the privilege of breaking out of the conventional when she was five and her mother died.

Becoming the vixen that she is today, Madonna defied the ‘proper’ female upbringing, and this helped her succeed in the male-dominated music industry of the ‘80s. Going solo in 1981, with the help of her manager, she was able to navigate through the industry, build her own studio and push her career. 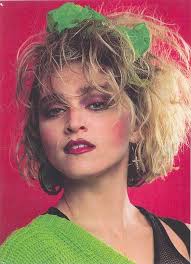 Madonna’s style was an inspiration to many ladies of her time and still is today. Like the entire style of the 80s, Madonna’s look was always loud with lots of eyeliner, mascara, and red lipstick.

To get the perfect Madonna makeup look, you’d need to apply the right shade of foundation and powder, bled properly; use brow gel and a little brow pencil to hold up your brows and fill in spaces, apply an eye shadow to match your skin tone, heavy eyeliner on your upper and lower lids and several coats of mascara, finishing with a natural shade blush on the cheeks and a choice shade red lipstick on the lips.

To some in the 80s, the Queen of Pop was considered to have a messy look. But the ‘80s itself had its own style. It was the GO BIG OR GO HOME decade and Madonna had it all figured out in her hairstyle choices. She either came in full swing with the Cyndi Lauder kind of messy or switched it up with full curls or whatever the Queen felt would express her at the appointed time.

To get the perfect Madonna hairdo, you’d need curl enhancers, heat protecting sprays, a hairdryer, and as many accessories as you’d deem fit for your look.

Although the Queen of Pop has transformed her style with the coming of age, her ‘80s look inspired and still inspires many.