The early 40s were turbulent times with the Second World War and its attendant disruptions on all aspects of life including fashion. Most people in Europe had to bear rationing that included garments. American rationing was not as disruptive on fashion, but fashion trends were somehow subdued with people’s attention turned to the war. The Paris fashion scene quieted down as designers fled to exile, which had the unintended consequences of having these designers settle in the US and influencing fashion trends there. But women remained fashionable even with the war raging. The late 40s saw a women’s fashion comeback with the ‘New Look’. 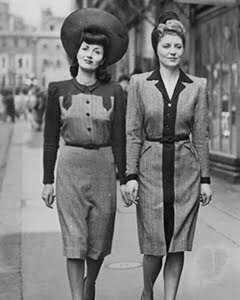 At the start of the decade, the utility look was strong in Europe where rationing was in place. The 40s style dresses from this look feature squared shoulders, narrow hips, and snug-fitting narrow skirts that were knee-length. The utility look was somewhat masculine with padded shoulders that edged out a bit. The shoulder and neckline angles came out as square or boxy shaped. Sleeves were short and puffed a bit at the top with gathers. Utility dresses were usually in one color, the most common hues being black, sailor blue, pine green, wine red, and navy.

While the utility look came trended out of necessity in Europe, it was adopted in America as well as fashionable. Glamorous screen actresses and other fashionable socialites could be spotted with this look. Plus size formal dresses in the utility design were more common on this side of the Atlantic where people were faring a bit better than in Europe. 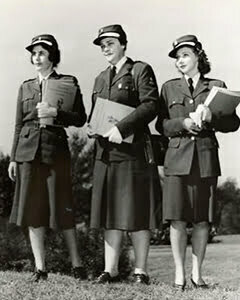 Plus size formal dresses were labeled as stout in the 40s. This was the acceptable label for plus size fashion for all; men, women, and children. Designers were well versed in using colors and lines to achieve slimmer silhouettes, which saw dark-colored plus size dresses with pleats. The pleats at the front and back produced vertical lines for a slimming effect. Formal dresses were worn with suit jackets when the occasion demanded. The jackets were in the same design; boxy shoulders, high neckline, and a narrow waist dropping to the mid-hip. The dress could also be worn with a coat in cold weather.

The mid-40s saw more variety in colors and patterns on dresses. Long stripes and small repeating florals were seen on plus size dresses because their effect is neutral while giving a more attractive look. Trim was also seen on plus size dresses, with the trims made of the same fabric and color as the rest of the dress. Long lines were also used on dress bottoms, with contrasting trim on the tops for the slimming effect. Generally, embellishments were somewhat subdued in favor of the frugal look.

Plus size dresses were also commonly labeled as ‘larger women’s sizes’ in fashion catalogs and magazines. One missing element in the formal dress from the 40s is the cleavage. Necklines were modest but they came in different fashionable cutouts designs like sweetheart, shirred, square, or slit. Cross front wrapped necklines were on more elaborate dresses. The V-neckline came with buttons, which could be undone when relaxing at home. 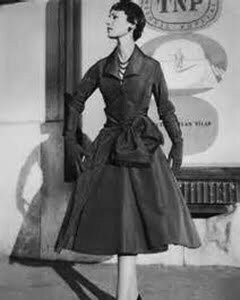 The Paris fashion scene bounced back after the war with a big influence on 40s women’s fashion. The ‘new look’ was popularized by Christian Dior’s his fashion debut. It borrowed a bit from the Victorian era with a cinched waist and a full flaring dress. This style was more feminine; the boxy padded shoulders of the utility design were replaced by small rounded shoulders, the bust lines were sharp and shapely, and the waist-high and narrow. The dress reached lower to the mid-calf with a flared and billowy hem. There was more fabric available for designers.

The postwar dresses were more colorful and embellished, in the larger theme of forgetting the horrors of the war. Brighter floral patterns with contrasting trim were used as well as pleats and gather for plus size dresses. The post-war era saw more widespread synthetic fabrics like rayon and nylon which gave designers more variety to work with.

Although the early 40s decade was a tumultuous one, it ended on a high note for women’s fashion with some design elements that are still desirable and fashionable today.