The 20s came with lots of societal changes including changes in women’s fashion. Society was becoming less inhibited; women had dropped the stifling layered garments of the Edwardian period for lighter and more comfortable garments. The jazz era in America was coming to life with women partying in nightclubs in more numbers. The sheath style flapper dress was the defining style of this decade with its androgynous looks.

The Paris fashion scene was the biggest influence on 1920s women’s fashion. Big-name designers like Molyneux, Poiret, Lelong, Vionnet, and Chanel were closely followed on both sides of the Atlantic. The Egyptian and ancient Greek themes were also seen in the draping garments of the late 20s to emulate the columnar sleek and svelte silhouette of the goddesses. Another emerging influence was the Hollywood scene. Movies even though silent, opened up fashion insights for millions of women who watched the fashionable actresses like Gloria Swanson, Louise Brooks, and Joan Crawford. Many women opted to sew their outfits with the newly innovated electric sewing machine. 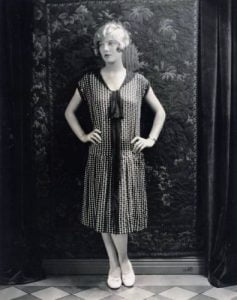 The chemise dress inspired women’s designs in the 20s decade. It was a dress that hung from the shoulder to the slightly below the knee in a fairly loose fit. The dress had a columnar look with a profile that looked boyish. It had a dropped waist which was accented with a sash belt. This design was popularized by French designers Coco Chanel, Jeanne Lavin, and Callot.

The raised hemline of the chemise skirt was a big thing in those conservative times. The flapper dress that came after had a skirt with even shorter hemlines. Evening chemise dresses had bare backs. The popular colors for chemise dresses were white, black, and beige. 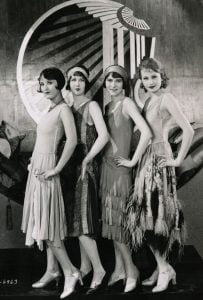 The flapper dress is iconic in the depiction of the roaring 20s fashion. It has been shown inaccurately at times. This party dress had a tubular profile with a skirt that reached slightly below the knee, which was scandalous in that era! For party-loving women, this was the perfect length for doing the fun dance moves in the vibrant clubs of the time. It was typically made of silk in velvet, chiffon or taffeta designs. The skirt hemlines were decorated with beadwork or frills to make the swishing moves more noticeable when dancing. The flapper dress version for daytime wear was less decorated and made of rayon.

Molyneux’ flapper dress designs had drapery on the arms and full scalloped skirts. They were translucent with large prints. Chanel’s first version of the famous black dress was seen in the flapper design in glamorous black evening dresses with shorter than usual hemline. Fellow Paris designer Paquin’s flapper had a plunging V-neck and some bulk at the hips.

You may also want to learn about summer flapper dresses. 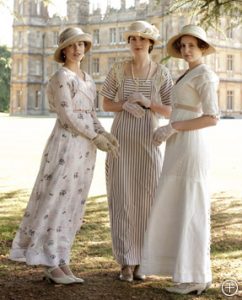 The all-white tea dress was a mark of class in the 20s because only the rich were able to keep house servants to do the laundry. This was a chemise dress in light and sheer white organdy, linen, or cotton voile fabric. It could also be made of heavy cotton, taffeta, or light wool for colder weather.

Here you can learn about vintage 1940s tea dresses. 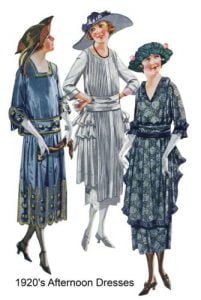 An afternoon dress was the more affordable alternative to the tea dress. It was also in a tubular design but was fancier than the day dress. It also doubled up as an evening dress. The skirt had large patterns at the hem. The neckline and sleeves were also decorated with contrasting embroidery trim with silver or gold threads. The edges could also be trimmed in velvet ribbon, silk braid, ruffles, or delicate lace. 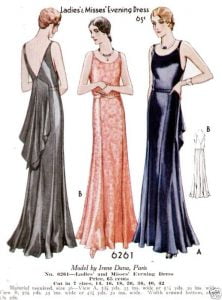 Evening dresses were differentiated by their fancy skirts. The handkerchief hem was dropped in different points along the hem such that a glimpse of the leg was seen when dancing. The hi-low hem closed the decade. The front was raised while the back of the skirt trailed, reaching to the ankles for a grand entrance to a glitzy evening event.