HOW WOMEN’S PANTS CAME TO BE 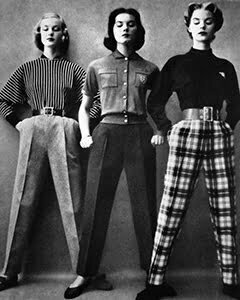 The first generation of women to have the freedom to wear pants in the 1950s women’s fashion. They fancied the slacks worn by the men and desired so much to wear them. Although the women loved men’s slacks in the 1940s, the manly style of those slacks gradually faded away in the 1950s since women liked to spice up their style. Women wearing pants were unacceptable in the early 1950s, but women like Lucille Ball and Vivian Vance still wore them from time to time. They mostly wore their pants to host their TV show named, I Love Lucy, despite how much it was opposed in the TV industry.

However, women didn’t acknowledge wearing pants not until early 1961 when Mary Tyler Moore was seen wearing the plaid pants repeatedly on Dick Van Dyke Show. Since the women saw others wear pants on TV but it was still forbidden, women in the 1950s secretly wore the pants at home. Later when wearing pants on TV became very rampant, women began to feel it was okay to wear them outside the home. 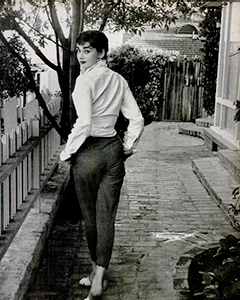 Back then and even now, cigarette pants had its signature look. It was high waist, with a short zipper by the side or at the back, with waistbands as wide as 3 inches, had no belt loops, and it was a bit wide at the hips but slim through the legs. They usually end just above the ankle bone.

The pants were always lined because it made the pants fit better when worn. The lining also helped to keep the pants straight and wrinkle-free.

The wool or cotton that the pants were made from often stretched out of shape or had the linings bust open due to bending the knees frequently. This was also caused by the slim-fit designs that the cigarette pants were known for. Sometimes even, the chic look of a pair of pants can be ruined simply because the linings have busted open on the inside.

The pants often came in black colors and the casual ones in different prints like plaid, stripes, and so on.

Since belt loops and wearing belts were considered masculine at the time, the ladies used a higher waistband or a thinner belt on their pants. 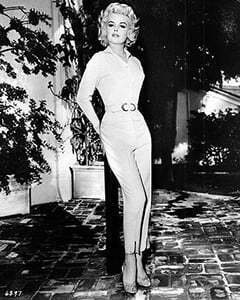 Capris pants were much flattering, brighter in color, and casual. Back in the 1950s fashion, the capris were not classified as pants or trousers, they were just capris.

At first glance, they would look to you like cigarette pants. The stark difference is simply in the length, which ended at mid-calf and a slit on each side of the capris’ base.

It could be said that every woman in the 1950s had at least a pair of capris in her wardrobe since it easily solved the problem of selecting casual wears.

The majority of the capris came in black so it could easily be matched with any striped shirt as that was a common dress uptrend back then.

ROCKING YOUR VINTAGE PANTS in 1950s 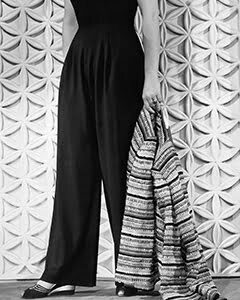 Fortunately for the pants lovers, the 1950s style pants are vintage and in vogue again.

While capris are a summertime necessity, high waist jeans are also making a great comeback. There are also many clothing lines that are bringing back these vintage clothes. The lovely 1950s cigarette pants, capris, and wide bottom jeans.

The pants are more suitable for women with office jobs. Being an important mode of dressing simply shows how plaid pants can never be outdated for the ladies.

With these plaid pants, you get to create the look they had in the 1950s. The pants are never out of vogue for ladies, especially when combined with collared shirts.

The plaid pants are a must-have for your wardrobe if you’re seeking to have a feel of the 1950s fashion look.

While making your fashion statement, there’s no need to look like a lumberjack. You can rock your plaid pants with a stylish shirt, a jacket, a cardigan, or a casual top.

Get different types of plaid pants from Pac Sun, Amazon, or Pinterest. They are also available in vintage-fashion stores.