Vintage formal dress has a significant status in fashion history, espicially in 1950s mens’fashion. 1950s teenagers’ fashion was influenced by a variety of elements such as 1950s fashion idols and cultural expectations. However, the formal wear of boys were still classy when they attended a formal party. Meanwhile, a corresponding 1950s haircut was matched the boys’ formal dress. 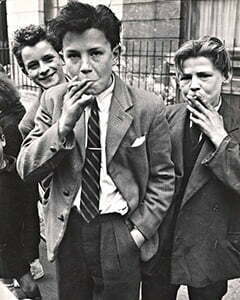 Boys, teenagers and young people are also very clean and have developed their own fashion. Short hair is a fashionable style, and many young people have short hair cut on top of their heads. High school and college boys usually wear trousers or jeans with a bottom layer and a T-shirt, collared shirt, sweater or short jacket. White socks and black shoes complete the ensemble. Except for hats and cowboy hats, young boys wear similar costumes. At the end of the 1950s, we began to see the emergence of less conservative styles. The rebellious male appearance also appeared on motorcycle leather jackets, studded boots, and boldly patterned shirts and sweaters, which became popular in the late period.

The 1950s was a conservative era, and expectations for fashion were much greater than today. Role models for boys, most of them are pure family men-except for “cool” movie stars. It takes a lot of time and effort to prepare and look beautiful, and gender stereotypes are stronger and more common. 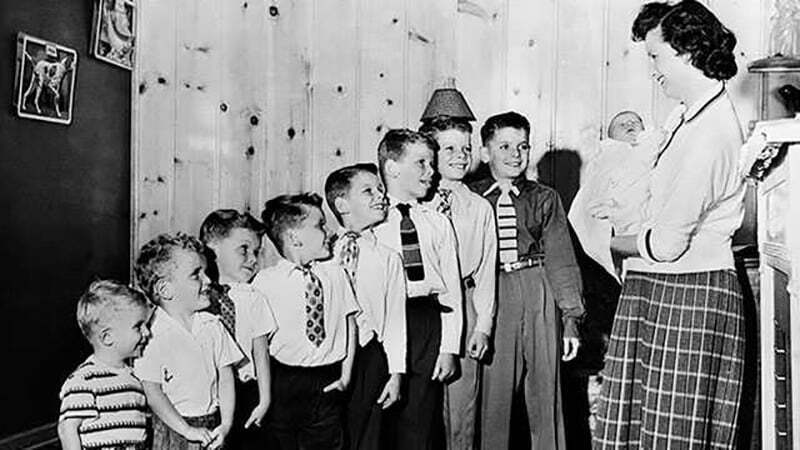 For boys in 1952, fashion required bold colors in eye-catching checks and interesting check patterns. The “dickey” pullover and the “vestee” pullover are the perfect complement to youth clothing. Corduroy sportswear, rayon shirts and gowns are great for casual wear, while three-piece and four-piece suits are great for formal occasions. 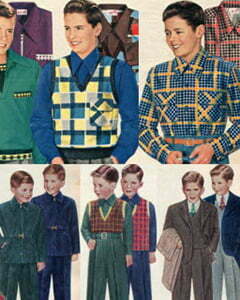 The boy in 1954 decorated the western flannel with bright and unusual patterns and plaid. They wore well-dressed gowns or corduroy camisoles depending on the occasion. For the youngest of them, the overall training made of pinwale corduroy is a fashion.

In 1955, in school or important activities, boys can choose two suits. The tweed or corduroy textures of the two suits are different and interesting, but the patterns and colors are subtle. For young boys, sports suits and attire are similar to miniature versions that fathers might wear on casual or formal occasions. 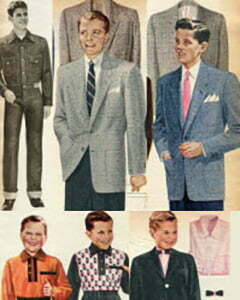 For boys in 1956, high-quality wool or corduroy suits are perfect for vacations or formal parties. Various styles of wool coats are also very popular in winter, and the pullover parka is the pinnacle of fashion. Argyle patterned cardigans and plaid shirts of various styles are also popular.

For the boys in 1959, the colorful coordinate system can be mixed with many works, and pastels and bright colors are popular in summer. More formal occasions require suits to feature sports jackets with novelty checks and stripes in interesting and interesting color combinations.

Ball gowns for men and boys. What to wear and how to wear it. Prom dresses for men and boys are formal, so you need to look super smart and super galloping for ladies, but you still want to be fashionable and wear comfortable clothes for this special event and want to give girls Leave a deep impression with your fashion and unique dress feeling.

In the 1950s, teenage boys in churches, schools (Catholic high schools or colleges), proms or any other semi-dressed occasions must wear suits and/or sportswear with formal pants to achieve very particular occasions. Sportswear is worn with matching or unmatched solid color pants. The coating can be a bright solid color, or more likely a pattern such as vertical stripes, grids, grids, corduroy, or two-tone color blocks. A white or sometimes colored formal shirt wears a tie or bow tie underneath. Sportswear and suits (matching suits) are cool to wear. These coats have a loose, straight, and comfortable personality that can be removed from the inside when needed (but usually left on the body). Shop for suits and sports jackets. In formal occasions, light gray or blue suits are acceptable. For the prom, the all-black tuxedo was worn until the late 1950s, when the popular trend was to wear a white evening dress with black pants. 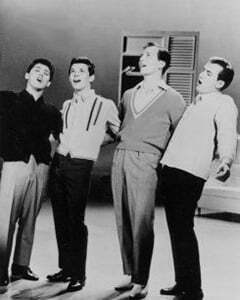 Although modern formal attire allows you some freedom in ties and collars, a full suit was included when dressing up teenage boys in the 1950s. The formal ensemble is a bow tie, starchy collar and pleated pleated trousers, while shiny leather loafers complete the look. Self-expression still has a place in soft suits or bright formal shirts.Boys’ hairstyles or basic, clean styles, plus short sideburns, were the very popular “Haine” (buzzing) at the time. The ceremonial clothing is a suit and tie.

If you want to take your boy to a formal party, you can choose a 1950s vintage formal wear with the  “Haine” (buzzing) in order to make him sparkish. In addition, other 1950s boys’ clothes are also great choice. Learn more about 1950s children’s fashion below.