The 70s was dubbed the polyester decade because fashion designers went wild with polyester designs as well as other synthetic fabrics. Fashion in this decade evolved rapidly as skirts went through short and long lengths, colors got shinier and the disco era took root. Fashion icons like Jean Shrimpton, Jane Birkin, and Bianca Jagger were the belles closely watched for fashion cues by millions of fashionable women. 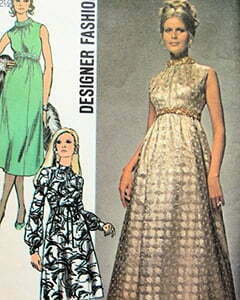 he swing dress of the late 60s trolled into the early 70s to be gradually dropped in favor of the long dress with an empire waist. The length dropped to the floor, maxi style, with bold floral prints, wide sleeves, and an oversized cape. Chiffon was the preferred fabric. The full skirt peasant-style dress with a Victorian flair was very popular as a prom dress in the mid-70s. The dress was long with ruffle trim, lace inserts, and long sleeves. The end of the decade saw the shiny disco dresses inspired by the 30s with their draping silhouettes. Metallic colors added sparkle to plus size formal dresses at the end of the decade as the disco era was in full mode. 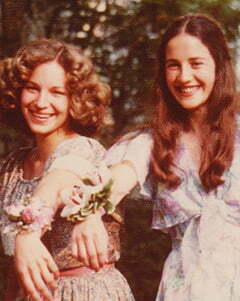 The Gunne Sax design was one of the most popular dress designs for both formal and informal dresses in the 70s. It was from the designer Jessica McClintock, inspired by the ‘gunnysacks’ DIY fashion of the 30s when women designed clothes from gunny sacks due to financial difficulties of the Great depression. The design was a simple prairie style, and yet romantic. Its full skirts were wildly popular with teens and young women.

The prairie style was a throwback from the pioneer era which was highlighted with the 1976 bicentennial of American independence. The TV show ” The Little House on the Prairie” popularized the prairie style with its depictions of the fashion from that era. McClintock rode on this popularity to craft her design which was mixed with other historical inspirations from the 30s. She crafted her designs from gingham and calico fabrics.

The Gunne Sax was a romantic and feminine design, an alternative to the masculine formal skirt suits that were becoming romantic with working-class women. The Gunne sax was very feminine with floral patterns, lace trim, ruffles, ribbons, and bright colors. The detailing on the bodice was elaborate with patterns and sometimes the use of multiple fabrics, lace trim, or ribbons on the seams. The wearer’s bust was highlighted and accentuated by the figure-hugging bodice. Lace was also used on the neckline.

The Gunne sax’s skirt was full and reached to the floor just like the Victorian dresses of the 1800s. Gathers were used to making the skirt fuller. The Leg o’ mutton sleeves was also an inspiration from the 1800s. The Gunne Sax design was restyled with empire waistlines, petticoats, and plackets for different customer tastes.

The prairie style gradually faded at the end of the 70s for more formal styles. The Gunne Sax design switched to prom dresses and evening wear. The simple calicos and plaids of the prairie style were dropped in favor of taffeta and satin. The dress became shorter and shoulder straps became thinner or removed to make a strapless cocktail dress. 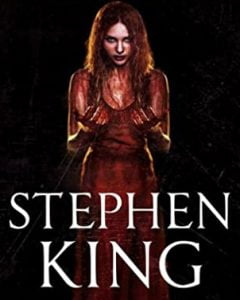 The prom dress of the early 70s was long and floaty. It had long sleeves made of sheer fabric while the dress was made from synthetic blends. The style was a bit loose on the figure. Later designs were embellished with eyelet lace. The sleeves became off-shoulder with an empire waist. The 70s Stephen King book ‘Carrie white’ briefly inspired a prom dress fad which was a strappy gown in a simple style.

1970s women’s fashion was also heavily influenced by the Hollywood and music scene. Women actresses such as Jane Birkin, and Diana Ross. Women closely followed events such as the Oscars where celebrities turned out in their best and often unconventional designs. Outfits to these events were becoming more of creative works of art than unconventional wear. still, designers would later restyle them for the conventional dressing.

The 70s ended with the formal dress taking on a mixture of inspirations with dropped empire waist, hugging bodice, and a touch of sparkle to catch the eye on the right occasion.