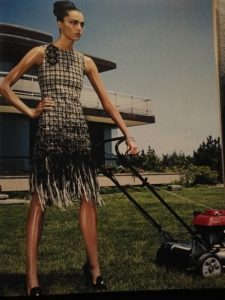 Sweaters were a part of the sporty boyish look sweeping through fashion in the roaring 20s. Women’s sweater dresses are a large need in Fall or Winter. In order to full the 1920s wardrobe, you may find some women’s jumper dress, cardigan sweaters for women and knitted sweaters. Wool sweater is also a basic element of the 1920s wardrobe. Before style your vintage look with 1920s sweater, know some about 1920s sweater fashion facts. 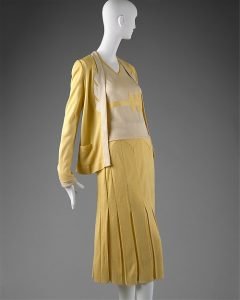 Sportswear that had long been an acceptable form of casual wear for men, also became acceptable for women in the 1920s. The 1920s winter sweaters and cardigans for women were copied from menswear, and some of the styles looked identical throughout the 1920s. Paired with tights, leggings, and a long-sleeved shirt underneath, these dresses are a comfortable, casual fashion statement. 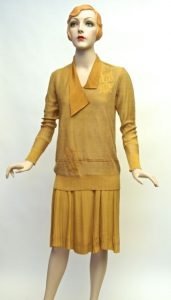 A jumper or jumper dress, pinafore dress or informally pinafore or pinny is a sleeveless, collarless dress intended to be worn over a blouse, shirt, T-shirt or sweater. References to jumpers in the early 20s century often meant a two-piece dress with a long middy-style top designed for sports, a dramatic change in sportswear for women. Jean Patou, Paul Poiret, and Coco Chanel were leaders in replacing cumbersome garments with practical and convenient clothing for sports. Patou dressed Suzanne Lenglen, the 1920s champion tennis player, in his hallmark short skirts and sleeveless long-waisted jumper blouses.

What type of sweaters did women wear in the 1920s? 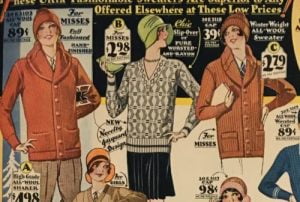 Wool sweaters came in various colors, among which maroon and navy were very popular choices. Some had buttons down the front, others had belts and wide collars. Best for year-round sports, the all-wool shaker knit-coat sweater had pockets knitted in. The less expensive versions had pockets that were sewn on. It buttoned up bust-high, with a double-knit shawl collar. The more expensive version had a fur collar sewn on. 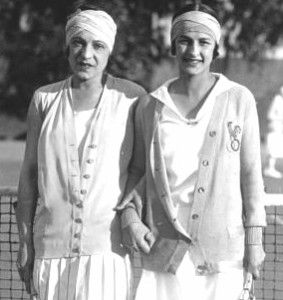 Cardigans were in high demand in the 1920s fashion world. In the 1920s, it was called a tuxedo sweater.They were typically all-wool, double knitted and came in a huge range of colors. They could have anywhere between 3-6 buttons, with or without pockets. Long roll lapels and a loose belt tie were designed not to close but to be worn partially open over a blouse. Thus it was a light sweater for days at home or for springtime outside. 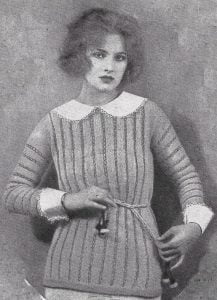 Pullover sweaters were equally common in thick shaker knits. They had short tuxedo collars or sailor collars. While some were hip length, most stretched down to mid-hip for the elongated 20s figure. Button belts or tie belts remained common for the first half of the decade. Popular colors were maroon, green, navy blue, brown, tan, raspberry, teal, and pink. The yarn was made of wool, silk, cotton or rayon. 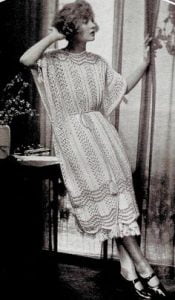 Knitted clothing was initially used for underwear. In the teens, however, women discovered that knitwear, including sweaters, made for good winter outerwear. Improvements in yarn and weaving made mass-produced sweaters softer, stretchier, and available in a wide variety of colors. 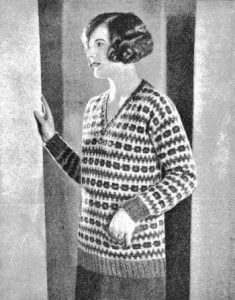 Novelty sweater designs was inspired by other cultures besides the Emerald Isles. The Fair Isle sweater was made popular by the fashion icon the Prince of Wales, who was seen wearing one with his golf attire in 1922. Women often wore them with knickers on the golf course. The women’s version of the sweater had a V neck, longer length, and a ribbed band narrowing the hem.

The Fair Isle pattern was detailed and unique, something a machine had yet to reproduce. Most Fair Isle sweaters were hand-knitted by women in Scotland and Ireland. They were sold to high-class men and women who could afford them.