The 1920s women’s fashion world was not all about dresses. Of course, women rocked beautifully crafted tops during the roaring twenties. Since the 1920s was all about women being emancipated, it was evident in the roaring twenties fashion, for women abandoned constricting attires and getups. Imagine going from wearing tight choking corsets to loose fitting and comfortable blouses, that’s liberating isn’t it? 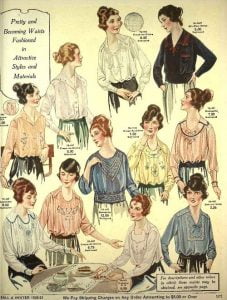 In the early twenties, women’s blouses were designed to be fashionable and were styled with beautiful embroidery and beads. Beautiful patterns were designed on the collars, cuffs and bodice of blouses. The roaring twenties fashion was evident as blouses were available in different beautiful eye catching colours which were different from the somber and white colour women blouses were known for before the twenties. Imagine a beautifully embroidered long sleeved, sheer colourful blouse with waistbands and viola, you’ve pictured an early 1920s women’s fashion blouse. 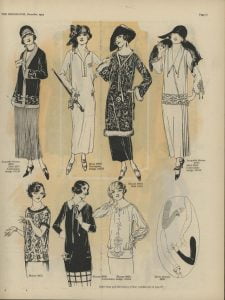 An interesting style in the roaring 20s fashion is the “Jacquette”. A Jacquette is a combination of a jacket and a blouse. This is what we call a wrap top today. Oh yeah, wrap tops didn’t just start today. The 1920s wrap top which was known then as a Jacquette, was worn definitely on a skirt or sometimes paired over a dress. It comes with a sash to wrap around the waist and tied to one side.

Let us not forget that women in the 1920s wanted to be free like the men and it also showed in their fashion. That is why in the 1920s women’s fashion, the men inspired blouses were also in style. They had the buttoned up blouses which looked like shirts and opened at the neck in a V design.  These boyish blouses had soft pointed collars and also had waistbands which were fastened with a button on one side around the waist, while some blouses were without waistbands as they only hung down on the waist. Nevertheless, some women still chose to wear the men shirts instead of wearing the feminine-designed, men blouses.

the middy shirts: smock tops in the 20s 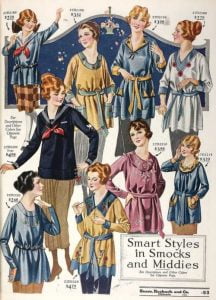 Another 1920s women’s fashion blouse idea was the middy shirts. This was a fashion idea birthed from the midshipman’s white and navy tops. The inspirational feminine sailor’s shirt was mostly worn for sportswear. The middy shirt’s professional look made it to be worn for work use and for female sport team players to wear as a uniform. The female tennis team’s attire was an all white middy top and blouse.

Middy shirts mostly came in white, red, blue or grey colours paired with a sailor neck scarf or the collar tied at the base with thin strings.

An interesting alternative to the middy tops were the smock tops. The smock tops were also sporty to the women in the roaring 20s fashion world. The smock top is basically a long tunic with some having big pockets and a contrasting belts. 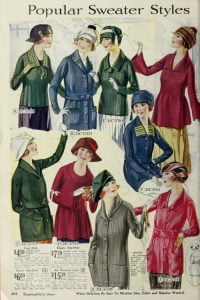 Oh yeah, one of the passions of women then was knitting and it definitely showed in the 1920s women’s fashion world. Knitted blouses were also in fashion and it was called “Jumpers”. These crotchet jumpers, which were definitely made of wool, were designed in beautiful patterns and styles and were always colourful. They were mostly worn during the summer.

The 1920s women’s fashion tops can be still be found in some trendy fashion top designs today. From the sailor blouses to the collared blouses, these designs are vivid in today’s fashion world. If you are interested in some tops and you want to add a little bit of some 1920s vintage style into it, go for the lacy collared blouses.