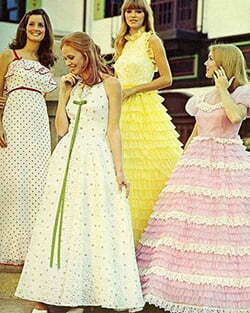 The 60s designs in evening wear rolled over into the 70s as fashion is rarely contained in a single decade. These were long ball gowns with empire waists, with tea-length or ankle-length skirts. The fitting bodice that had been seen in the 50s and 60s was retained even as skirts became slimmer and sheath-like. But silhouettes became rounder and more feminine starting the mid-70s as designers looked back to the 30s and 40s. The disco look with shiny embellishments was also seen in the 70s as were short minidress style cocktail dresses. The end of the 70s saw the return of the columnar Grecian draping look in shiny styles in evening wear. Metallic liquid colors were in vogue as people went out dancing in their most glamorous. 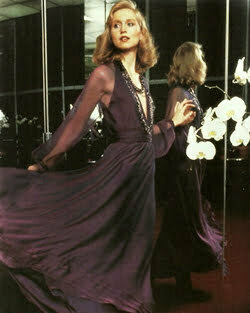 The 70s were known as the ‘polyester decade’ because designers increasingly used synthetic fabrics for all garments. High bulk Crimplene, which is a thick polyester was used in making full A-line skirts. Satinized polyester, which felt like silk was used in more expensive ball gown dresses. It was blended with crepe de chine to make this smooth luxurious fabric.

Other luxurious fabrics used in making ball gowns were velvet and satin. The 70s ball gown was glitzy and glamorous with a touch of sparkle. More TV events demanded gowns that stood out under the lights. The disco scene was going strong in the 70s and more women preferred evening wear that could dazzle as well as allow freer movement on the dance floor. The ball gown became shorter to allow the wearer to move better. Celebrity designer Halston’s creations were embellished with sequins and swirling hemlines to highlight the dancer and her moves perfectly. His designs used velvet, satin, and lycra to bring out the long sleek figure-hugging creations that were popular with his star clients. 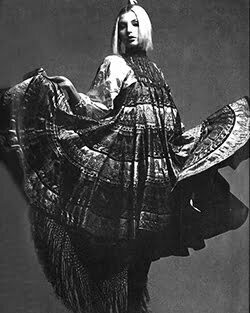 The hippie fashion from the late 60s had a big influence on 70s fashion as well. Mainstream designers picked up this trend for haute couture in the 70s. Handcrafting styles like crocheting and knitting, patchwork, and embroidery could be spotted in high fashion. Other handcrafting methods like beadwork, felting, smocking, quilting, and dyeing were used to make part or whole garments. Designers like Zandra Rhodes put out creations that took on the loose style of the hippies while blending polyester with these native and handcrafted materials.

The ball gown of the 70s was a mixture of several styles from the previous decades. The tight-fitting bodice was retained in day as well as evening wear. Skirts varied in width; the early 70s saw the columnar slim profiles of the late 60s while the full skirts of the 40s saw a comeback in the late 70s. The blurring lines in evening wear saw varying lengths of hemlines. Ball gowns were almost exclusively floor length in the previous decades. The hemline was tea-length or ankle-length for many gowns in the 70s. Younger women preferred the shorter versions.

Halter necklines were all the rage in the 70s, and many ball gowns had halter necks rather than shoulder straps. They could be spotted on creations by designers like Missoni and Halston. Collared gowns also appeared in the 70s, especially in haute couture gowns. Other embellishments were bows at the bustline or waistline. Belts were also used to highlight the waistline.

Designer Dian von Fürstenberg’s wrap dress in 1974 was the perfect example of how lines had blurred between day and evening wear. This garment that was simple to wear and take off became an instant hit with women all over the world and quickly sold over 5 million pieces in one year. Its wrap design was simple yet elegant. The skirt was midi length which made it modest enough for work. It had loose sleeves and hugged the curves but not too revealingly, just sexy enough for a date. More women were stepping into the workplace and needed a garment that was practical but retained the sexy feminine form. Younger women could be spotted going to work in a figure-hugging wrap dress worn with low pumps. When the evening came, it was worn with comfortable strap sandals to step into the nightclub. The designer cheekily admitted to having designed the dress so it would be taken off fast when the occasion demanded.

The late 70s evening wear was a fashion rich variety with garments that could be categorized as ball gowns, cocktail dresses, or daywear depending on the wearer’s tastes. Women had more choices on what to wear and how to wear it.