History of fashion cannot be discussed without the mention of the 1960s. In other words, the 1960s fashion clothing added so much value to the fashion world and has never stopped influencing fashion. The decade’s styles were unlike that of other decades – they were authentic. Indeed, a new side of fashion was established.

The 60s fashion trend had been in diverse parts. The very inspiring 1950s fads were still very much present in the early 60s together with the young girls’ fashion trend which seemed more like a revolution to the fashion rules that had been in place before the decade. With British and American fashion being the major influence, designers and their models were at the forefront of propagating the styles of the era. Let’s take a look at the major highlights of the 1960s women fashion. 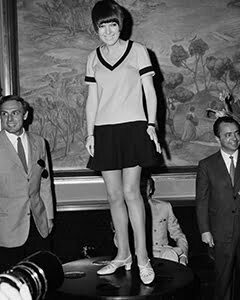 The mini-skirt fashion which was a very short skirt trend (usually 4-6 inches above the knees) compared to other decade’s dresses, has become a generational trend that began in the 1960s. In fact, it could be said to be the hallmark of the decade. Women of the era needed a self-expressive fad that could reveal their personalities compared to the very modest previous fashion styles. Well, thanks to Mary Quant, the inventor, the miniskirt became that self-expressive style. The miniskirts could be straight penciled, A-line, or even knitted, what mattered was that it was very short. The trend was well welcomed by the women of the 1960s (especially the youths) who made it so popular, even to date. 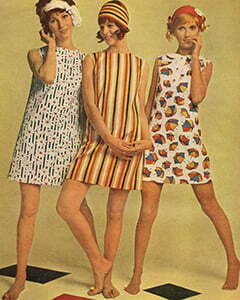 The shift dress was one style the women of the 1960s rocked to the fullest. It was one of the favorite daily casual wears for them. The style which was a 50s carryover was modified to suit the 60s. during the early 1960s, the shift dress definition was a simple, knee-length dress sewn to fit the curves of a woman. As the decade went on, shift dresses changed to a classic A-line dress. It was then made without any waistlines although it still maintained a narrow appearance. The shift dress became shorter and shorter and was what every classic 60s girl wore. 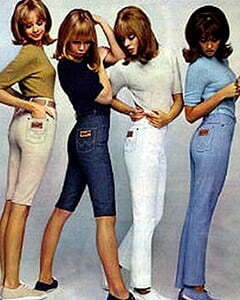 While the mini dresses trended, pants were also on board. One of the most popular pants styles that graced the decade was the Jax pants. It featured a high waist, fitted hips, slender legs, and side zippers. However, it was one of those 50s styles that trended more in the 60s than even the former decade. Jean pants also took its turn in the 1960s, with the then favorite color being white. Later on, the women’s pantsuit style evolved. Although it seemed too masculine a trend for the women of the decade as it was directly copied from the men’s suit, it was also a welcoming style. 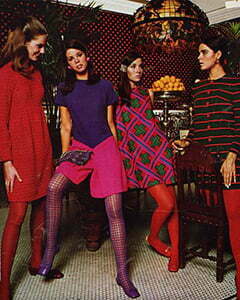 The trend of colored tights in the 60s was a proof of their love for colors. Since tights were needed to be worn under miniskirts and dresses, the innovative and fashionable women had to make those tights so alluring and this they did with bold colors and different material textures. Some of the most used colors included purple, yellow, green, orange, white, and even black. Materials frequently used were lace, fishnet, or herringbone. The tights were often worn down to knee length to cover the knees. Where tights weren’t used, very long socks were used. 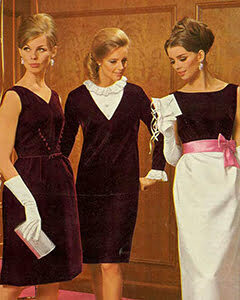 For such a fashionable decade like the 1960s, evening dresses were extremely amazing. Unlike many other decades, there was no specific evening gown length that trended most. The women usually had the choice of wearing either a long or short gown. What mattered most was that it had the empire waist. Long dresses in most cases were done with back pleats. For whatever length it was, very beautiful materials such as lace or damask were used in making them. Sleeveless was the norm and the dresses were usually detailed with a big bow, cascades, or other stunning embroideries.Want to learn 1960s evening dresses outfit ideas? What to wear for a party?

Check the link to learn what to wear for a 1960s party.

The era was quite a bold and colorful one. The major influence on colors and prints were the modern art movement and pop art. Bright shades of colors like green, yellow, orange, and pink were the main deal. As for prints, horizontal prints, polka dots, color block, checkerboard, and others were the most seen on dresses. All forms of 1960s fashion clothing had these amazing colors and prints.

The 60s fashion innovations were indeed mind-blowing. Thanks to the fashion icons who contributed to the uniqueness of the era. One such was Jackie Kennedy who portrayed a neat, modest, and fashionable style. She was a perfect inspiration for the 60s women, especially during the early years. Mary Quant was another well-recognized fashion icon. She had introduced the most influential trend of the decade which was the mini-trend. Brigitte Bardot, Baby doll look, and a lot more also brought impressive styles to the fashion decade.