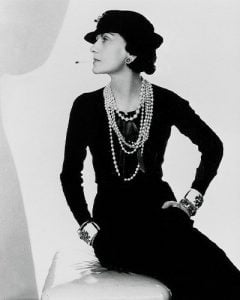 The roaring 20s are remembered as a time of The Great Gatsby (wild party) with lots of glamour and glitz. It was a decade full of hope and recovery after the horrors of the First World War. People’s attitudes had changed to the view that life was short and should be fun. Fashion sense became less inhibited and tended towards simplicity and comfort. It was also the Jazz age when dancing in the nightclub was popular with partygoers full of glitz and glamour, who needed outfits that could show their moves. Paris designers especially Coco Chanel had a big influence on fashion as women closely followed their latest designs in fashion catalogs. 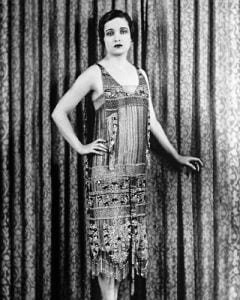 The layered garments of the beginning of the early 1900s had been discarded in favor of simpler and more comfortable dresses. The corset was discarded and floor-length seen as impractical for more activities outdoors. Women, even in the upper classes, no longer kept servants to help them dress. The shift dress became popular as it was easy to slip in and remove without help. The narrow and cinched waists were also gone, as waistlines dropped and curves became less pronounced. By 1923, the straight and slim silhouette had become fashionable. This was the flapper or ‘la garconne’ look that was almost boyish.

The flapper dress was simple yet classy with a low hipline and reaching down to the upper calf. Modesty still called for covered knees. Deep pleats on the front panels were used to create a tubular look. Necklines were round, square, or V-shaped, but modesty still kept the neckline away from showing cleavage.  The flapper dress appeared in varying degrees of embellishment.  Dresses for day wear featured tiny buttons and pins, while party dresses were elaborately decorated with fringe, sequins, and beadwork.  The belt was tied below the hips. 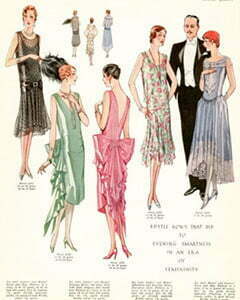 The evening dresses of the roaring 20s fashion followed the flapper theme in the simplicity of construction. The silhouette was long, narrow, and straight. Evening party dresses reached down to the knees and was ornately decorated with sequins, fringes, and beadwork. Semi-precious stones like rhinestone were seen on more expensive dresses. Some of the more elaborate gowns of the early 20s featured skirts with panniers.

The calf-length party dresses for women were worn for dancing nights out as it allowed freer movement. Images of women in dancing lines kicking high in the air are iconic of the jazz era. This party dress featured decorations that complimented dance moves. Beadwork was used on the average affordable dress while fringes were on the high-end dresses. Tassels and frills were the most popular decorations as they were easy to make and attach. They shimmied and swayed as the dancer made her move, without the risk of getting tangled by the hemline. 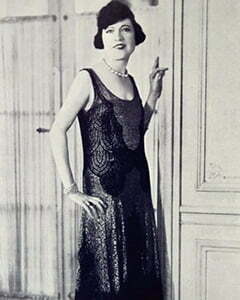 While many films show 20s party scenes with ladies in fringed dresses, the reality was that few ladies could afford these party dresses. This is because making and adding fringes was done by hand, requiring good tailoring skills and lots of time. Moderate fringes were found on the more expensive dresses accessible to the average woman. Full dress fringes were very rare and seen on designer pieces by Paris fashion designers Vionnet, Chanel, and Molyneux. These fringes were made of gelatin sequins and very delicate to attach. These were very expensive pieces. They were also awkwardly heavy which made dancing a bit difficult.  Most women opted to strike a balance between glamour and practicability and went for moderate fringes and accessorize with a pearl necklace, which equally pronounced class and sophistication.

For women in the 20s it was all about freedom; to move and dance, as well as feel less inhibited about conforming to the society’s need for elaborate curves. The simple tailoring of the flapper dress and its shorter hemline was the expression of this less inhibited attitude.