The 60s were a decade of youthful fashion as the more vocal and bolder younger generation took charge of the social and fashion scene. From the mod movement in the UK to the punks, the 60s were some of the most exciting times for fashion in the 20th century. Hemlines shortened drastically; the miniskirt was perhaps the most radical piece of clothing of the 60s. wedding dresses that reached above the knee were seen for the first time, as bold young brides chose to infuse the hip with the traditional.

The one-piece dress dominated the 1960s women’s fashion. Shift, Mondrian, tunic and even baby doll dresses were in one-piece with above-the-knee hemlines. The freedom of movement and power to catch the eye made these dresses hugely popular with trendy young ladies.

The traditional white wedding dress saw a massive makeover. A look at wedding photos of the 60s will show a rich variety of wedding dresses; empire gowns, circle skirted dresses, columnar dresses, and even simple minidress style wedding dresses. Even the accessories differed a lot; from traditional long veils to simple flower garlands in the hair. 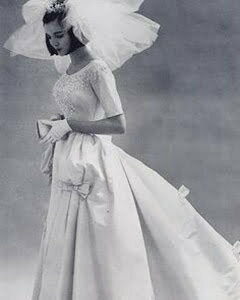 The 50s had seen voluminous skirts with curved flaring waists. Full skirts continued to be popular in the 60s but lost some volume, and the hems became shorter. There was also the slim pencil skirt look which was preferred for formal dresses like the designer suits worn by Jackie Kennedy. Princess gowns with short hems were popular wedding dresses in the early 60s. Trains diminished in size or were discarded for wedding dresses that reached above the knee. Long veils were also discarded in favor of veiled pillbox hats, or bouffant hairstyles. 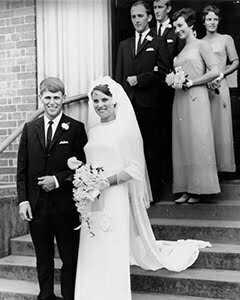 Mod fashion popularized by the London fashion crowd was trending in the mid-60s. it featured higher waistlines, higher hems, and narrower skirts. The sleeves could be long or short. Columnar dresses with empire waists were also popular. These were more conservative, reaching the floor much like traditional wedding dresses. But white remained the favorite color for wedding dresses with floral patterns.  Pastel and blue hues were also popular alternatives. 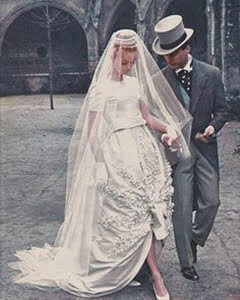 One of the most baffling fashion trends of the 20th century was the paper 1960s dress. These ‘paper capers’ were made of a paper-rayon blend that was only just strong enough to cut into a temporary garment. This craze extended to wedding fashion, with paper wedding dresses selling at $15. This trend was short-lived but had shown the extent of fashion experimentation in the 60s. Even royal weddings saw a shift in style. The wedding dress worn by Princess Margaret of Britain was simple but the tastefully cut. 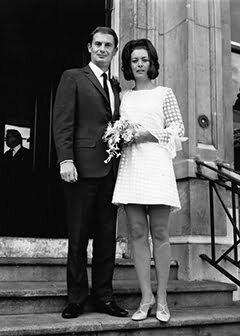 The miniskirt craze of the 60s was the biggest thing to happen and inevitably influenced wedding dress styles. More brides were bold enough to walk down the aisle in wedding dresses that reached to the mid-thigh. Movie star Audrey Hepburn wore such a short but stunning wedding dress. This memorable decade was truly for the bold and the beautiful.