In the 1953 movie ‘Gentlemen prefer blondes’ directed by Howard Hawks, Marilyn Monroe wore the pink dress that would go on to become one of the most iconic dresses in On-Screen Hollywood TV history. The dress was created by William “Billy” Travilla, an award-winning fashion designer and friend of the actress. 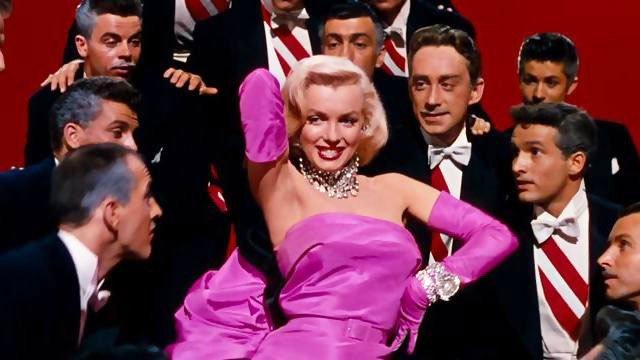 Marilyn Monroe wore the pink dress when she played the role of “Lorelei Lee” in the famous sequence in which she croons out the song “Diamonds are a girl’s best friend” with a choreography that involved being accompanied by several suitors in dinner clothes. Marilyn Monroe in the pink dress was a dazzling sight to behold; the hot pink bustier dress was paired with a set of matching opera gloves and an enormous knot at the waist. The dress was accessorized with tonnes of diamonds and satin stiletto shoes from Salvatore Ferragamo.

Originally, Monroe was to wear a breathtaking showgirl costume that was embellished with a mass of diamonds. But during production,  it became public knowledge that Monroe’s nudes that she’d taken prior to her rise to fame had leaked to the public. Travilla, was then given strict instructions to design a new, less revealing costume in order to distance Monroe from the scandal and thus the pink dress was birthed.

The Design Of The Dress

The dress was made of Peau d’ange silk fabric, lined with black silk/satin. The floor-length dress was strapless and had a straight neckline and a side slit to allow for movement. The huge bow on the dress was not a separate piece but a part of the construction of the dress. The bow is lined with black satin and pleated in the back on one side of the gown and folded over and attached to the other section. 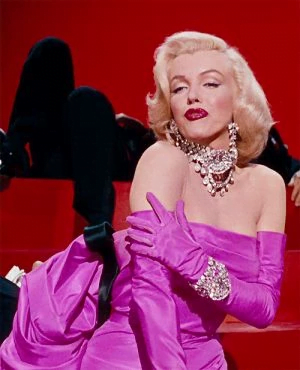 The dress came with short pink gloves that were constructed in such a way that the palms of the gloves are suede. There are arm tubes constructed from the same material of the dress to match the gown. The jewels Marilyn wore were costumes and not authentic diamonds.

Marilyn Monroe’s pink dress over the years has grown to achieve cult status in the Hollywood Industry. The dress became an icon of fashion and film and is often imitated or parodied by other Hollywood celebrities for example Madonna in her music video for her 1985 hit music, “Material Girl”.

Playboy also featured an imitation of the dress for a segment of their playboy video entitled “Material Girl”. Mexican entertainers Thalia and Aida Pierce also wore a similar-looking dress, Thalia when performing “Diamonds are a girl’s Best friend” on stage in Spain and Aida as a tribute to Monroe on what would have been her 75th Birthday in 2001.

Where Is The Pink Dress Now